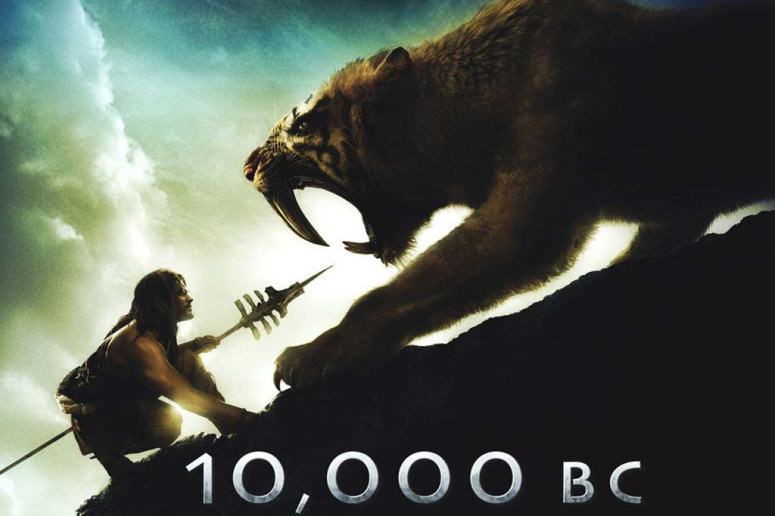 Hell hath no fury like a Fazil Taquiddin being upset with a film.

The movie was utter crap. There: I’ve said it. It was completely rubbish and a total waste of time. Since I have not seen Uwe Boll’s ‘In the Name of the King’ or any of his other works, I have to say that this is the worst movie made in the 21st century that I’ve had to pay RM10 for. The world would be better off if the movie was not even made in the first place. I mean, what was the purpose of the movie? Here is a movie about mammoths (or Manakhs as they are referred to in this film), sabre-toothed tigers and giant mutated-dodos (I have not a clue what those ostrich-like creatures are).

Furthermore, as far as I can recall, there has not been a movie set at this period of time for a vey long time (no, I have not seen ‘Quest for Fire’). So why not get it right? It didn’t have to be like ‘Lord of the Rings’, but if the makers put a little bit of effort into this movie, it would at least be mediocre; after all, it’s not everyday that we get to see mammoths on the big screen. Unfortunately, the filmmakers are not at all familiar with the word ‘effort’, because it seems like none were put into this film. 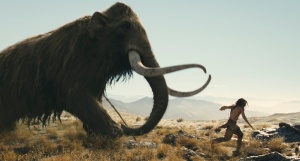 The story follows a character name D’Leh (Steven Strait), a young hunter from a mountain tribe who is in love with a blue-eyed girl named Evolet (Camilla Belle). An old woman called the Old Mother (Mona Hammond) prophesises that when the day of the last hunt comes, the greatest among the hunters will kill a mammoth and claim the girl (as well as White Spear, so that he can impale her, hehe 🙂 ). Obviously on that day, D’leh did kill a Manakh, claiming the spear and Evolet in the process. But when a group of four-legged demon (i.e. evil men on horses. Do horses exist at that time?) took Evolet away, naturally he has to forsake his people and save her. But he is not alone as he was joined by Tic Tic (Cliff Curtis), Ka’ren (Mo Zinal) and Baku (Nathanael Baring). I wonder who came up with the lame names. Tic Tic? Come on.

Tracking them down, the group manage to get close to the demon. Unfortunately, they were not alone, with giant feral ostriches-like creatures came out of nowhere for company, and started attacking both sides. Once again, the demons get away with Evolet, leaving D’Leh behind in a pit with… you guessed it, a sabre-toothed tiger. Needless to say, D’Leh survives this ordeal and, rejoining the rest of his group, continue the hunt for the demons. Along the way, they encounter other tribes who had been similarly attacked by the demons. Marshalling them together, D’Leh and his group eventually reach the demon’s base, which resembles ancient Egypt, complete with pyramids and a sphinx (with the head of a saber-toothed tiger this time), a city way too modern and advanced for that period (though they didn’t have Sunway Lagoon yet). Here, D’Leh lead his warriors in a final effort to save Evolet and destroy the evil empire.

I have to say, however, that I gave up on the movie after D’Leh’s encounter with the first tribe. Leading up to this point, the filmmakers were already pushing it: during the scene with the saber-toothed tiger, D’Leh has a chance to kill the tiger. Instead, he frees it, and in the process, said one of the worst lines I’ve ever heard: “If I free you, promise you won’t kill me.” LOL! He actually said it as if the tiger could understand him. So of course, the tiger does not attack him and runs away. 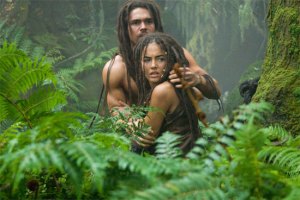 Now, apparently this movie is directed by Roland Emmerich. I find that hard to believe. It is as if the movie was directed by someone else and Emmerich was paid (for some reason) to have his name credited as the director. You see, I have always enjoyed his films, regardless of what others think of him. I loved ‘Independence Day’ and ‘The Patriot’, and I thought that ‘The Day After Tomorrow’ was very entertaining though it got a bit slow towards the middle. I even enjoyed ‘Godzilla’ while everyone else criticised it. So how could a man who’s made some very decent films all this while was able to come up with this? I just can’t honestly express how stupid this movie is. Who the hell green-lighted the project? I’m incredibly tempted to just tell the whole story and spoil it for you guys, since I do not expect any of you to actually watch this shit.

Another area I have a huge problem with is the acting. I mean, who are these actors? I have seen Camilla Belle before, and don’t, in fact, have any problems with her in this movie. It’s the rest that bothers me; I just don’t know if everyone else is trying to act like silly homo-sapiens or that their acting is simply laughably bad. For example, there was a part with a crippled old man, who was supposed to be wise, but when he appeared and opened his mouth, the whole cinema erupted into laughter. It was that bad. The way some of the lines were delivered is also another laughing matter. Real shitty and makes me wonder if I would have preferred them grunting instead.

And as for the historical inaccuracies…a grand city with ancient Egyptian architecture, when mammoths roamed the Earth? Great big ships? Men on horses? English? Now, I never thought I would have a problem with the latter as English has always been used in such movies for simplicity purposes (we can’t get Mel Gibson to direct every film now, can we?). However, with the exception of D’leh’s tribe, everyone else used their own made-up language that it seems as if D’leh’s tribemen were actually using the English language as English itself. And not some other ancient language disguised as English so that we folks would not have to read subtitles. Do they even have spoken languages at that time? Like I said, didn’t they just grunt?

Now, in every negative review, there are always a few positive points about the movie reviewed. Sadly, I just can’t think of any in this case. There’s not a single scene in this movie that I would watch again. The scene with the mammoths migrating and later being hunted down was slightly impressive, I guess. The same can’t be said with the giant ostriches, and the saber-toothed tiger only appeared briefly for comic-relief purposes, thanks to D’leh’s cheesy lines. Simply put, I don’t think it will be among the 7 short listed films in the Achievement in Visual Effects category for the Oscars next year.