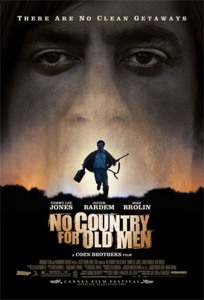 Some say that ‘No Country for Old Men’ is the best movie of 2007. Some even went as far as saying the movie is flawless. With four Oscars under its belt (Best Film, Best Directors and Adapted Screenplay for the Coen Brothers, and Javier Bardem scooping up the Best Actor in a Supporting Role award), these statements wouldn’t be untrue. For me, its certainly one of the best movies I have seen and it’s undeniably in my top three of 2007, but I won’t go as far as saying that it’s a perfect movie.

However, given the poor standard of movies that came out last year, I have to say that ‘No Country’ truly is the most deserving film to walk away with the top honors at this year’s Oscars. Come to think of it, all the five nominated films were equally good (with the exception, perhaps, of that little indie film about a pregnant 16 year old girl). If I have to pick one extra edge that this movie has over the rest, it’s probably due to the powerhouse performances by its actors, most notably that of some Spanish dude.

The movie, which is adapted from the novel by Cormac McCarthy, is about a drug deal gone bad. Llewelyn Moss, played by Josh Brolin, was on a hunting trip when he stumbles upon a few four-wheelers with dead bodies all over the place. Searching the area further, he found a Mexican who was barely alive, but left him as he finds drugs and a briefcase with almost 2 million dollars inside it (and more dead bodies, since you asked). Since he is not an idiot, he takes the briefcase home and drives home to his wife, Carla Jean (played by Brit Kelly McDonald, who has a really good Texan accent). Later that night, feeling guilty about leaving the Mexican behind, he goes back to the place, only to find him dead. Suddenly, another truck (with living drivers this time) spots Moss, and starts the chase. This is where the fun begins. 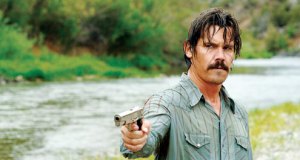 As I said earlier, this movie is packed with amazing performances and with that. Having said that, this movie would mean nothing without Javier Bardem’s Anton Chigurh. Seriously. Just as Daniel Day Lewis is the key to ‘There Will Be Blood’, Bardem delivers a performance that is essential to the greatness of this flick. Chigurh was sent to track down the money and kill the one who carries it (and anyone else he’s related to). The thing that sets Chigurh apart from every other psychopathic mass murderer is his weapon of choice, which happens to be a cattle-gun. The device, which looks like an oxygen tank (complete with a hose connecting it to the gun), uses pressurised air from the tank to fire a bolt/rod about 5 inches long into a person’s skull (yes, it is meant to be used to slaughter cows, but this is Chigurh we’re talking about). His other weapon is a silenced shotgun, but let’s not dwell on that. All I could say is that there was no contest at this year’s Oscars for the Supporting Actor category as Bardem’s performance made the other nominees, especially Hal Holbrook, drop dead by just looking at his creepy features (especially that oh-so-cool 70’s hairdo).

Now let’s not forget about Tommy Lee Jones. If you’re wondering what the title of the movie means, it actually refers to his character, Ed Tom Bell. He plays a sheriff from a family of sheriffs (his father and grandfather were lawmen before him), who is trying to help Mr. and Mrs Moss from the danger that they’re in. Along the way, he talks about how the place is no longer as safe as it used to be (hence ‘No Country for Old Men’, because Tommy Lee Jones after all, is old). He said that there was a time in the good old days when a sheriff doesn’t even need to carry a gun.

Nowadays however, with lunatics like Chigurh running loose, things are somewhat different. Jones is actually born to play this character. It’s very sad to see him at times, how he copes with the present situation and his last few lines in the film (which I didn’t understand at first) could actually reduce you to tears. However, I believe that his role in ‘In the Valley of Elah’ was sadder (where his son, upon returning from I-Raq, was murdered, barbequed and chopped to pieces). Nevertheless, he gave a remarkable performance here; that is, if you can truly understand and appreciate the shit he has to deal with. 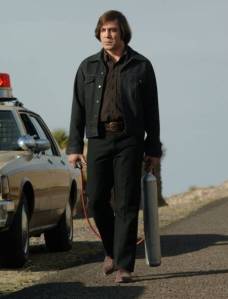 Overall, like I said, the movie was good, but I do have one or two issues. First of all, what was up with the score? A movie’s score is an important element in a film. This movie however, doesn’t have any (according to some website, there’s actually 16 minutes of score, but I didn’t hear anything). So at times, you feel restless, especially those scenes when Moss was tracking the dead bodies. Uncomfortable silences. Looking at it from another view, however, it does somehow increase the tension. Some might be seating at the edge of their seats, worrying what is going to happen next, because it’s so quiet. Me, I would prefer a little bit of music at least, which got me thinking: what the hell did they play at the Oscars when the movie picked up its four statuettes?

Another issue is the film’s ending. Alright, you’re entering spoiler territory here. I didn’t quite like how a ‘certain’ character was killed in this film because they didn’t show how. I was waiting for a flashback scene towards the very end as to how he met his demise, but they were none. I mean, they showed a lot of deaths in the film, but when it was ‘his’ turn to die, they just showed his body lying on the floor like a common rat. I think a character like that deserves a proper send off. That’s just my opinion, but I could understand if you feel that by doing it that way, the movie has a more unique touch to it.

I guess those are the only issues I have with the film, but as I have mentioned, one can actually look at those two issues as something positive and unique. So, if you are unlike me and prefer the movie to have no score and that the certain death scene could be perceived as an excellent way to kill off a character, then the movie could be perfect after all.

Now how often can you say that about a movie?

Fazil used to like ‘Juno’, but now he‘s not sure why he ever did.

6 thoughts on “A Perfect Nation? – No Country For Old Men”