Katie Heigl and I go way back. All the way back to the mid 90s. I remember those sweet, sweet nights, when I would turn on Sky Movies and watch ‘Under Siege 2’ for the umpteenth time. They’re quite fond of playing back the same movies over and over, and Steven Seagal’s face do get a bit boring at times (honestly, is that man capable of emoting more than one emotion? Have a look at his face, and tell me). Thankfully, she was there for me, playing the role of Seagal’s daughter. A short moment of fame, before falling off the radar for a fair number of years (cameo roles notwithstanding), but my memory of her good looks did not fail me.

Then suddenly, she came (back) into national consciousness with some TV medical show. Apparently, it was quite famous, so much so that my ex-girlfriend’s party was designated a ‘Grey’s Anatomy’ party (“Everyone will have to dress up as a character,” it said on the card). I came as a doctor, complete with the white coat, and was rather popular because of it. 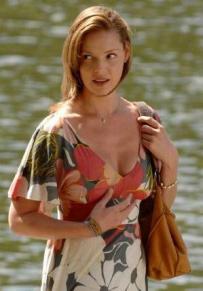 Not as popular as Katie, though. Finding time on the side of ‘Gray’s Anatomy’, she manages to find time to act in ‘Knocked Up’, and now ’27 Dresses’. Here, she plays the role of Jane, a woman so specialised in being a bridesmaid she has played the role 27 times (hence the title of the movie). It was during one of these weddings that she runs into Kevin (James Marsden), a wedding journalist for a magazine. Smitten though he was by her, she pays no attention, for she is smitten herself by her boss, George (Edward Burns). At this time, her sister, Tess (Malin Akerman) returns to the Big Apple, and much to Jane’s chagrin, Tess and George hit it off, to the point where they got engaged. Of course, being the good girl and the good friend that she is, Jane kept her feelings deep down to herself, all the while she planning the wedding and playing the role of the bridesmaid once again.

Of course, the plot and story is rather formulaic. Nevertheless, what isn’t these days? As Roland Barthes once stated, “The author is dead.” Meaning to say, there is no such thing as originality any more (not quite agreeing with him, but that’s another story). Ultimately, a lot of everything is derived from something else, thus diluting source inspiration. Live with this, and life is a whole lot easier. Accept this statement for what it is, and ’27 Dresses’ will be more welcome to you. 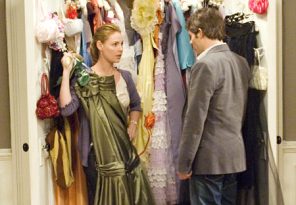 Just because he’s French, and a philosopher, (and dead) doesn’t make Barthes (completely) correct in his hypothesis. I believe that in the execution of stories, of art, many things come into play, of which story and plot is certainly one. But the role that people, actors and directors, have to play cannot be undermined. In this regard, ’27 Dresses’ may strike you as formulaic (it certainly did me), but the performance of the cast lifts this movie beyond the other mass products of the Western movie machine.

Take, for example, a possible single line description of this movie. “A romantic comedy set in New York.” Your mind, then, would be populated with jazz songs, views of New York at night (the Brooklyn Bridge, ably destroyed in ‘I Am Legend’ and ‘Cloverfield’, would be prominent), and nice-looking twenty-somethings with nice-paying jobs (usually the artsy-fartsy kind) in nicely-designed offices that they’re not required to be in very much. Lunch in swanky restaurants, nights in happening nightclubs, shelter in high rise apartments. If a combination of these comes to mind, then they would aptly describe ’27 Dresses’. 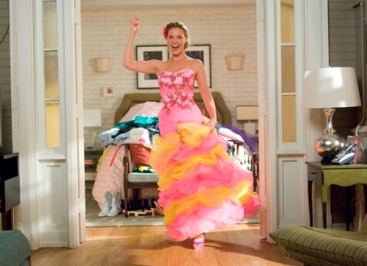 That would be taking Katie Heigl out of the equation. Quite simply, you can’t; she is the anchor of this movie, the headlining name and the one actor on the poster. Who cares if James Marsden was in the X-Men trilogy, that Superman movie and the (relatively) annoying movie about that Disney princess? He’s not the one selling the tickets here. People will flock to the movie for Katie, and they will be rewarded, for she has great charisma on screen. It helps that she is pretty, yes, but Malin Akerman is also pretty, and she lacks the presence and the attraction that Katie has. She is able to shift from comedy to drama with great effectiveness; one minute, hating Kevin’s guts, the next, willingly dressing herself in the bridesmaid dresses that she had kept throughout all the years. 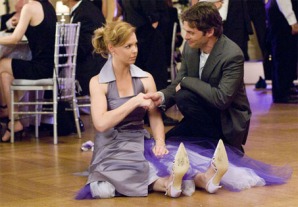 Not that it’s fair to disparage James so much. His chemistry with Katie was incredible, their reaction to each other setting the tone every time they come onscreen. Quite frankly, it’s fun to see the two of them verbally joust with each other. There are moments when you’d think, “Ah, he’s an asshole,” and there are moments that makes you go, “Aww.” Nevertheless, he is well-cast, the cynical Kevin being a great comedic and romantic foil to the wedding-loving Jane (showing a different side to James as an actor as well). The rest of the cast are OK, but you imagine other people being in those roles and doing as decent a job, if not better. Like Edward Burns, for example: I had willingly staked my life on the fact that the guy on screen was, in fact, John Corbett. Of course, I was wrong.

The same could be said about the whole movie. I was wrong that it’ll be boring, and not quite worth my time. Not that the movie will be anything more than nice, but in a season where there’s not that many ‘fun’ movies that are actually fun to watch, ’27 Dresses’ stands hem and shoulder above all the rest. It progresses nicely, becoming more and more fun. Take it for what it is, without being to critical of the formula that movie is made out of, and ’27 Dreses’ will be a nice fit for the fun two hours you’re looking for.

Fikri says ‘Katie’ because he can never be bothered to actually say ‘Katherine’.