There is some irony in the title. New York city served as the location for this film, but though I’ve not been there, I do realise that the term ‘quiet’ and ‘city’ probably won’t appear in the same sentence together when it comes to describing it. Nevertheless, this irony is one that I perceive, with emphasis placed on the word ‘perceive’. 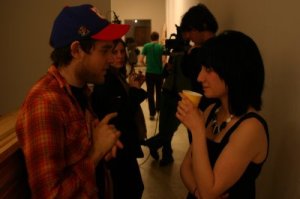 In essence, perception is all that we can truly have of any one thing. It is our perception, versus the world. It’s largely based on materials that dramatises whatever it is that is being perceived. Put it another way: what I know of New York City, is based, thus far, only on the stuff that I’ve seen on TV. Coming to my point, what I know of American youth, and the American zeitgeist, is based only on the media that has been fed to me. We will come back to this.

Let’s refocus, and listen in on ‘Quiet City’. Jamie (Erin Fisher) arrives in town in search of her friend. However, arriving at the subway station, and being unable to contact her friend, she asks for help from Charlie (Cris Lankenau) for directions to a diner, where her friend would be waiting for her. Of course, her friend wasn’t at the diner, but still not being able to contact her, Jamie and Charlie settle down, and starts to talk and get to know each other better. Over the next 24 hours, we get a front row seat as we watch this relationship blossom.

In watching the movie, I am reminded a lot of the Irish sensation, ‘Once’. It’s difficult not to, with the director, Aaron Katz, employing similar, if not the same techniques in getting his story across. Handheld cameras, no lighting…the quintessential low-budget film. In fact, it’s so low budget that it actually made some money back: a quick look on its Wikipedia page reveals that the $2,500 film made back over 6 times the amount.

It’s not just the technique that is similar. Like ‘Once’, the film also explores a budding relationship right from the very beginning, when they both meet as strangers. In essence, it is a love story, but it could also be one of friendship, as Katz teases us with the ‘will they, won’t they’ dilemma that plays from the start to the end. The aforementioned techniques amplified the emotions that we feel, as if we’re right there. We are not just given a slice of New York life on a plate to us, we are a part of the ingredient. 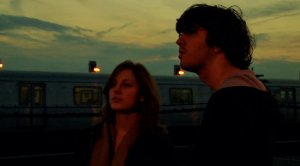 However, we arrive at the much-hyped main course, only to be disappointed by the aforementioned appetisers. It is unfortunate, then, that the one part that fails to truly engage me was the story itself. In short, I find it…well, boring. I say boring, because half the time, the characters engage in little more than verbal foreplay. In fact, it does not get anyway near the climax, remaining in a state of flux, always constantly on the way to somewhere rather than actually arriving anywhere.

It doesn’t help that the filler words were overkilled, with the characters saying ‘like’ and ‘you know’ every other sentence. It feels like I’m watching an episode of ‘Laguna Beach’ from MTV, one without the soundtrack riffing out college rock tunes and random interviews that has nothing to do with the main action on the screen (“Yeah, well, you know, I think it’s, like, not a good idea, you know? It’s, like, the rule, or something.”). In reality, I don’t actually mind them too much, but if it’s repeated over and over and over and over again to the high heavens, the effect feels like scratching a blackboard with your nails. That is, if the blackboard is your brains and the dialogue replace the nails.

It does, however, fit in with my perception of what Americans do and how they talk and communicate with one another. In that sense, it does give credence to the ‘reality’ that we’re watching on screen, the very zenith of the mumblecore films. ‘Quiet City’ shows life as life is, without any filters on the creative (fairly improvised, remember) and the technical. It’s not an easy thing to do, and it’s something that I’m still learning how to do well. Ultimately, the movie stays true to its roots, with a director talented at recreated the perceived reality, and an attractive leading lady (Erin Fisher) to boot.

It’s just unfortunate that the reality portrayed is so banal that I want to blow my brains out.

Then again, Fikri might one day shoot a mumblecore movie himself.