Here at ‘Thoughts on Films’, we like foreign films. After all, movies across borders, cultures, and all that jazz, so I got my hands on this lovely Spanish flick. I actually saw a trailer of this on one of my DVDs and thought that the movie looks interesting (I guess cross-promotional efforts does work, then).

Actually, I should qualify that; the film, which means ‘To Rob A Thief’ in English, is actually an American production. It’s the spoken language (Spanish) that might mislead you. But make no mistake about it: the main men behind the movie, like the director Joe Menendez and Jojo Henrickson, who is the writer, are both Americans. So be careful before getting your hopes up too high, since it’s not the typical critically-acclaimed Spanish film that has various international awards to its name and has ‘Almodovar’ written on its posters. No, this is your average Hollywood popcorn flick but spoken in Spanish and stars Spanish stars of various nationalities. Well, they’re actually telenovela actors, which is a plus, since I love telenovelas!

You see, I used to follow a few (yes, you’re getting to see my sweeter side). There’s something about their language that mesmerises me every time, as well as the cliffhanger at the end of each episode, and of course, the babes (Danna Garcia = Holiness). However, the movie itself is no telenovela and no, its not because you don’t have to wait after a hundred episodes to see the guy getting the girl. If I am to compare it with anything, I would say ‘Ocean’s Eleven’ or any of its sequel: a direct rip-off with a much simpler script. Having said that, those movies were incredibly complex, so this is actually not a bad thing (though of course, it is not quite the same as the Ocean’s trilogy).

The story follows Alejandro (Fernando Colunga) and Emilio (Miguel Veroni) (sadly, there’s no Juan, Carlos nor Pedro). These two are buddies and they’re big-time thieves. They don’t rob banks with socks on their heads and guns in their hands; rather, their team is more subtle. Emilio, arriving in town from Colombia, plans to reunite his old team and rob an infomercial guru, Moctesuma Valdez (Saul Lisazo), who sells fraudulent products (through Telemundo, of course) to poor Mexican immigrants (it’s what I call the Robin Hood bit). However, herein lies the problem: their team no longer exist, with everyone else busy with their own business. Thus, Alejandro assembles a team of immigrantes (Mexican immigrants, obviously enough) for this particular heist; needless to say, they’re not exactly a bunch of cool jocks.

Now, usually, their team would disguise as immigrants when performing their tasks but this time around, they’re going for the real thing. After all, they’re merely immigrants right from the streets of Los Angeles (or Los An-gay-les, according to the outsiders) with bits of skill here and there. Emilio was reluctant at first to accept the new recruits but as they say, desperate times call for desperate measures. Hence, their team includes Rafaela (Ivonne Montero), who is my favorite. She reminds me of a certain pornographic actress named Suzie Diamond (I am talking about porn in a rather ‘art-sy’ kind of way, and not a perverted kind of way, so there’s nothing wrong there). She specialises in modifying cars (Rafela, that is. Not Suzie Diamond). Then there’s Rafa (Ruben Garfias), Rafaela’s father, who is the getaway driver because he works as chauffeur in the day.

For the ladies, there’s Anival (Gabriel Soto) who is quite the hunk. He is required for heavy lifting and to dig a tunnel leading all the way to the vault. Miguelito (Oscar Torres), an out of work actor, portrays various characters, while the film’s writer himself, Jojo Henrickson, portrays tech-savvy Julio. The minor characters include Gloria (Julie Gonzalo), who plays the nanny Alejandro is sleeping with in order to examine Valdez’s mansion. I won’t spoil much on her character but know that this girl is quite a senorita. There’s also a fat dude by the name Primitivo (Richard Azurdia), but his role wasn’t that big. I just love the name. 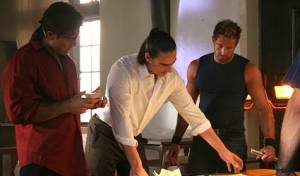 Out of the names mentioned above, I see some serious talents here. Miguel Veroni kicks major ass. He has the kind of look that is just perfect for a Columbian drug lord. I don’t mean any disrespect to Senor Veroni by saying that, but simply meant that he’s a fine actor and would really like to see his performance in an English-speaking, Hollywood-produced and Michael Bay-directed flick. Besides him, there’s Saul Lisazo. In the credits it is stated ‘Special Appearance by Saul Lisazo’, so I am guessing this guy is quite big in Argentina (further research revealed that he actually used to be a football players). He played the role of a villain fantastically and makes you think that he is indeed a filthy rich vato. He embodies the name ‘Moctesuma’, which was probably inspired by the fifth Aztec emperor. Whatever it means, you wouldn’t wanna mess with someone with that kind of name.

And the two babes, Ivonne and Julie (note that I am using their first names, which I never do in order to maintain the professionalism of my reviews). Sadly, Ivonne was playing a tomboy, so she didn’t look that sexy but there’s a certain vibe that she emits every single time she appears on screen. And when she wore the black dress…mamacita! Julie, on the other hand, is much sweeter and has rosy cheeks that…well, you just wanna bite. She is damn cute, and is no stranger to Western audiences either, having appeared in films like Dodgeball, A Cinderella Story and the Veronica Mars TV series.

All the hotness aside, these two ladies were great, Montero and Gonzalo that is. Montero, who normally played sexier roles (Google image search, baby!), pulled off the role of a tomboy compellingly well and was a fun character to watch. Gonzalo could fool you into thinking that she’s a telenovela actress when she’s actually an American who speaks English fluently. She is adorable as a nanny and hides the secrets of her character perfectly. 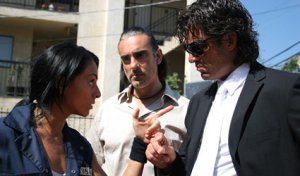 My final word? If you didn’t already guess, I have to say that the movie was rather fun and enjoyable. Nothing great nor original, though; once you know that it is an Ocean’s rip-off, you’ll be able get by it pretty fine. Having said that, the movie is indeed original for me, in the sense that it’s the first time I was watching a Hollywood-produced Hispanic film with Columbian, Venezuelan, Argentinean and Mexican actors. I would say that it’s quite fresh and I hope they make more of it. Certainly, I would love to see Joe Menendez at the helm again as well. Historically speaking, perhaps the award-winning Spanish language films can only be made by Pedro Almodovar, Guillermo Del Toro and Alfonso Cuaron, but there are times when you just want to lay back and see what its like to be an immigrant. It’s a perspective that has never been done before and an interesting one to boot. So let’s give the Hispanics some attention, respect and love that they deserve, por favor.