I have to admit, the first time that this film truly caught my attention was when it was announced that the premiere of the movie will be held at Cannes. “Blimey,” I thought (yes, in my head, the word ‘blimey’ serves as the long-term residue from my Cockney subconscious), “that’s quite an honour.” Not that Korean filmmakers are in need of a map to get to the film festival itself. They have been making regular visits over the past decade or so, ever since Kim Ki-duk’s excellent ‘The Isle’ made its way across many isles to be there. Regardless of the travel miles clocked up, having a premiere at arguably the biggest film event in the world is no small cake (I say arguably, since I include the Oscars in the reckoning. However, while this is an argument for another day, I’ll take some time out to say that I think film festivals such as Cannes, Berlin and Pusan are far more encompassing of the film world, with emphasis on ‘world’).

A closer look at the title reveals that the initial read-through was not a mistake: it is indeed a movie titled ‘The Good, The Bad, The Weird.’ It doesn’t quite roll off the tongue, I must say, but what it did do was to remind me of the ‘The Good, The Bad, and The Ugly’. If you have the same feeling, then you’re right on track. This film, as much as any, is a spoof of the spaghetti Westerns. Set in the thirties in the Manchurian desert, it follows three characters: Good (Jung Woo-sung), Bad (Lee Byung-hun) and Weird (Song Kang-ho). The Weird, who steals a map from a Japanese official, is being hunted down by the Bad, who is paid by the same official to bring back the map. At the same time, both are looking over their shoulder for the Good, who is also hunting them down.

It was only a few days before that I had discussed a similar notion with my friend. “Would it be interesting,” I ventured, with news of Korean movie ‘The Chaser’ being picked up by Warner Bros for a remake still relatively fresh in our minds, “if we turned the tables on Hollywood? Imagine if we were in a position to be able to take something out of Hollywood, and make it distinctly Asian, or at the very least, non-Hollywood.” Little did I know that I was slightly behind time, for director Kim Ji-woon is already on the case, and has been for the past year or so.

I personally find him to be a chameleon of a director. Never one to stick to any particular genre, his ability to subtly but suddenly shift from horror (‘A Tale of Two Sisters’) and violent gangster film (‘A Bittersweet Life’), and dabble in comedy as well (‘The Foul King’) is something that should be appreciated. ‘A Bittersweet Life’, in particular, was choked full of film goodness, brimming with dynamism and death. I saw that film many times over, and never once am I bored by it.

It helps that he has Lee Byung-hun on his side. He is that rare breed of an Asian superstar, big enough to have been cast in a major Hollywood film (G.I. Joe). Some debate that perhaps he is far likelier to ‘crack’ Hollywood wide open than Rain is (though Rain is first and foremost a singer and a dancer). He has yet to face-off against Stephen Colbert in a dance-off (whose culmination to the two-year long ‘rivalry’ is one of the funniest things I’ve seen recently). And I hear you in the background saying, “What about Daniel Henney in ‘Wolverine’?” Never mind the fact that his character is supposed to be a German (and thus, not Asian), I feel that Byung-hun is more likely to make a bigger success of things. The journey to that has already begun (with ‘Bittersweet’), and it’s likely to be fast-tracked by this film and ‘I Come With The Rain’ (which will also be shown at Cannes).

And neither is Byung-hun alone in this film. Running (or rather, riding) alongside him is Song Kang-ho, arguably the most bankable faces of Korean cinema over the past decade. His filmography reads like the ‘What’s What’ (instead of the ‘Who’s Who’) of some great films: Cannes winner ‘Secret Sunshine’, top-grossing ‘The Host’, the excellent ‘Memories of Murder’, and even two out of the three ‘vengeance’ trilogy films made by Park Chan-wook. They’re ably rounded of by Jung Woo-sung, who I don’t know as well as the other two, unfortunately. Nevertheless, having done some research on him, I do think that he certainly has the credibility on his CV to bring something to the screen here. 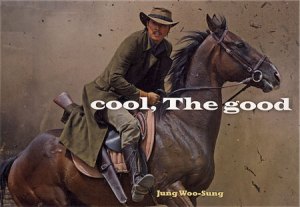 Having been shot in Mongolia, Manchuria, and Vladivostok, it’s also one of the few Korean films to have ventured beyond the borders of their own country. Thus, expectations are running high here about the film, which runs the risk of increasing the disappointment when it does come out. Hotly-hyped films are a double-edged sword in that regard; perhaps more should be done to reign in the expectations. However, it is difficult to do when a film has already consumed a lot of money, garnered a lot of attention not just locally but also internationally, with a fresh concept and three of the hottest actors in the country (with a good director) making good on that concept.

Come Cannes, May the 24th be with them. They’ll need it.

Fikri apologises for the lame Star Wars joke. He needed to let it out.

3 thoughts on “Kimchi Spaghetti – The Good, The Bad, The Weird”