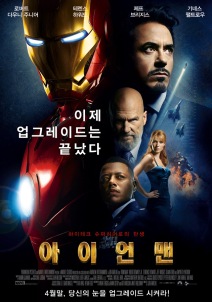 Pure, adulterated, fun. Despite what many high-brows would claim when it comes to films, the fun factor is probably the most important factor of all. Yeah, it would be nice if all films can change the way we think about the world. Perhaps a film that infuses more than a little bit of philosophy into the script, one that stretches the mind (since it already stretches our wallets), would float your boat rather better.

But that is about thinking. When it comes to the summer time, it’s all about feeling. Feeling the love in the air, feeling the heat against your skin (not too hot, though), feeling the relief at the oncoming semester holidays, and, in this context, feeling the fun flood back unto the silver screen.

And that, ladies and gentleman, is what ‘Iron Man’ is all about. 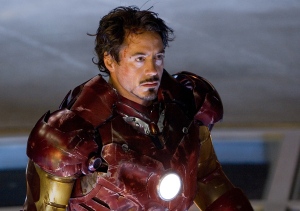 A large part of that is due to Robert Downey Jr., who plays Tony Stark. It doesn’t really seem that way, though, to begin with. In fact, if anything, the character of Tony Stark, while charismatic, might come across as an asshole. “They say the best weapon is one you never have to fire,” he says at a weapons demonstration (interestingly called the Jericho. I say interesting, because I kept thinking of Chris Jericho because of it). I respectfully disagree. I prefer the weapon you only need to fire once. That’s how dad did it, that’s how America does it, and it’s worked out pretty well so far.” As fine a line in the script as any, but it sets up Stark as a character that’s more likely to be hated than loved. 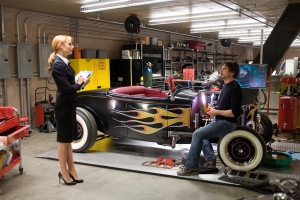 Of course, that didn’t quite work out that well for him. Kidnapped by Afghani terrorists, who ordered him to reconstruct for them the very shocking and awesome Jericho (again, thinking of Y2J). Of course, being the American patriot that he is, “No” is as resounding an answer that he could give them. Obviously unacceptable to the demanding terrorists, they locked him up with another prisoner, Yinsen (Shaun Toub), an admirer of the world-famous Stark. Obviously unacceptable to him, he builds an iron suit instead, planning for his escape. And in the last of the long line of in-your-face denial, the terrorists are obviously stupid enough to be oblivious (not obvious) to his actions. Stark breaks out, and begins to believe in saving the world by not making more weapons for people to kill each other. 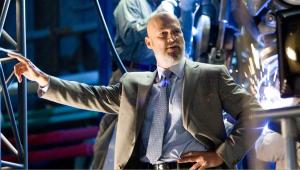 Such news are not welcome to the ears of Obadiah Stane (Jeff Bridges), the other major player in Stark Industries. Weapons bring in the major moolah, especially from the American army, and so Tony’s decision to shut down weapons development is as good as waving bye-bye to millions and millions of wonderful moolah (now I’m thinking of the Fabulous Moolah. Stop it with the wrestling references, Brain!) . As the plot develops, we see how the fine line between loyalty is crossed. 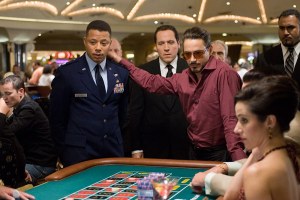 Fortunately, this is where Mr Downey comes in. With his charm and charisma, there are few actors credible enough to pull of this role. You might be an asshole, but you’ll be a popular one if you’re witty. And witty is exactly what was brought to this role. It’s difficult not to like him when he’s throwing out lines left, right and centre like it’s Friday night at the Comedy Club.

Humour, though, is not the overriding factor when it comes to playing a superhero (unless it’s one whose power is to make people laugh uncontrollably. Now there’s a thought… 🙂 ). Vince Vaughn might have been quicker with his mouth, and any one of the Wilsons might have inspired more laughter with just a glance of their look, but Robert Downey Jr. combines all of those factors together and still has enough in his tank to charm his way into our hearts. Quite frankly, though I am not a maniacal fan of Iron Man (preferred Wolverine myself, actually) or Robert Downey Jr., when news of his casting filtered through some time ago, it kinda struck me of how fitting it was. I remember thinking that it could well be the most defining role of his career, if he plays his cards right. 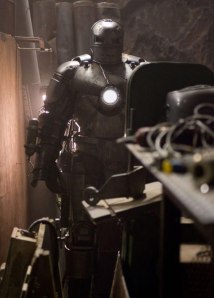 That’s the reason why I haven’t even begun to discuss the rest of the stellar, A-list players on the stage. Ever had that feeling, deep down, that sense of satisfaction when everything you thought might happen played out perfectly? How about we double that, and make it ‘better beyond my wildest dreams’ good? It seems that Robert Downey Jr. was born to play Tony Stark, and that Tony Stark was created and written with only Robert Downey Jr. in mind. How much of each is in the other is probably another debate worthy of discussion, but you might get bored by all this enthusiasm (if you haven’t already).

As mentioned earlier, the rest of the cast also did a great job, though that wasn’t particularly surprising. Terence Howard is probably the most underutilised of the other characters here, and for now at least, serves as nothing more than a governmental sidekick in his role as Rhodey. Kinda like a pen-pushing Robin to Tony Stark’s Batman, to utilise a metaphor (simile? I can’t quite remember now… ) from another superhero franchise. It’s also nice to see Gwyneth Paltrow back, and even nicer to see Leslie Bibb make more than just an appearance (she gets fifth billing on the credits, which, considering the people ahead of her, is as fine a career move as any). And Jeff Bridges? With a bald head? One word…WHOA! 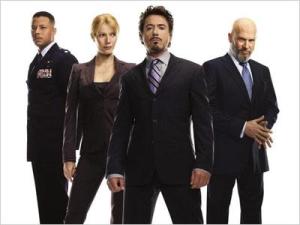 It also helps in the ‘cool’ factor that Jon Favreau, the director (and Tony’s limousine driver), decides to go almost all rock for the soundtrack. Iron Man himself has been known to inspire certain rock songs from certain rockers, so it is appropriate in that sense. However, its inclusion owes a bigger factor to the director using the soundtrack not only to anchor the movie in heavy metal riffs building to major climaxes, it also firmly positions the Iron Man franchise as one of, if not the coolest of the superhero films around. It makes a nice change from all that grand orchestral music from Superman, Batman, and the X-Men movies. It’ll be interesting to see if the Incredible Hulk will follow suit. 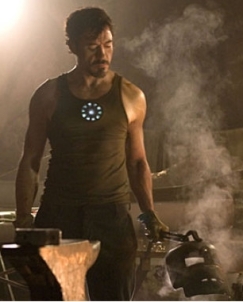 Nevertheless, I can go on and on about the movie, or rather, about the pieces that make up the puzzle. Yeah, the music’s great. Sure, the girls are nice. Certainly, the CGI looks damn good (as seamless as any movie I’ve seen thus far). Yet, at the end of the day, neither of those comes close to matching Robert Downey Jr. as the rock star of the show. Yes, they all help to make him look good, and adds that extra shine on his metal suit. However, make no mistake about it: the best thing to happen to this film was when Robert Downey Jr. inked the three-picture deal (yes, there’ll be at least two more, if you believe the filmmakers, and the coda after the credits. What, you mean you didn’t stay to the end…? 🙂 ).

And for that, I thank you, Jon Favreau.

Fikri apologises for the late review of this film. He was determined to finish his semester project before rewarding himself with any of the summer flicks. Next up, Dr. Jones…