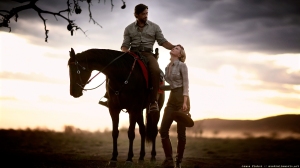 It’s quite a rare movie, ‘Australia’. As you can very well guess, the subject of the film is about a significant event in Australian history, when the Japanese bombed Darwin during the second World War. Though I don’t know much about Australian history, it seems like an interesting enough subject to be explored on film. Despite the seemingly-endless stream of Australian actors and directors, Australian films (that looks at Australian issues) in themselves are become a rare breed. The good ones are even rarer; though I haven’t seen that much films from Down Under myself, the last truly interesting one I saw over the last few years is ‘Clubland’.

You can see, then, that the nationalistic aspirations of this film is one factor that caught my interest. Naming the film after your country may seem rather egoistic, but I see it as an interesting reversal of international films of late (certainly from the Western nations. And by Western, I include Australia in this as well). I see a lot more examples of globalisation in films than I do in a lot of other industries. This can primarily be tied to the cast and crew members, many of whom seek gainful employment in this field in the good ol’ US of A. Thus, the very Australian nature of this film makes an interesting change. And when I say Australian, I mean kangaroo-loving, Bondi Beach-sunbathing, Home and Away-watching Australian (though I personally prefer Neighbours 🙂 ). With the exception of Ronald Harwood (African born, British trained) and the editor Dody Dorn (American), every cast and crew member that is involved in this production is as Australian as Foster’s. 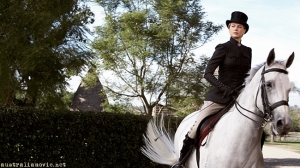 We have the director, Baz Luhrman (Moulin Rouge), whose films are always not quite the conventional fares that we might be expecting. Few other people would even think about shooting a Shakespeare remake in its original language, while the visual and musical spectacular that is ‘Moulin Rouge’ reflects his own unique background, and the unique way of looking at films as a result of that. Despite his talent, he has made very few films, which hints, at least, at the kind of care, time, and effort that he takes with his projects. Having completed his Red Curtain trilogy (consisting of ‘Strictly Ballroom’, ‘Romeo + Juliet’ and ‘Moulin Rouge’), he now plans to turn his attention towards a trilogy of historical epics. 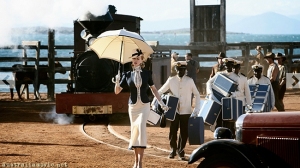 That’s not to say that this project is without its worries. Russell Crowe (another Australian, natch) was originally cast in Hugh Jackman’s role. Rumours of his high personal demands probably turned out to be true, though I see him as someone who truly cares about the end result, as much as the process. Kinda like Edward Norton with ‘The Incredible Hulk’. Nevertheless, Mr Crowe was quickly jettisoned, and, despite rumours of Heath Ledger coming in to do the role, Hugh Jackman was eventually settled on.

That leads me to another reason why I’m highly anticipating this movie: Mr Wolverine himself. Having had my curiousity roused by his ‘X-Men’ performance, I sought to find out more about him, and have been a big fan ever since. I think that he is a fine actor, capable of doing a multitude of different roles very well. He’s theatre-trained, of course (search for his Actor’s Theatre clips on Youtube, where he can be seen dishing out good advice to young hopefuls), which explains a lot of things, but at the same time, he’s probably one of the hardest working men in showbusiness, full-stop. In 2006, six of his films were released, while the end of this calendar year would have seen him grace the silver screen at least three times. Let’s not also forget the ‘Wolverine’ movie, slated for next summer.

Despite his talents, however, he has mainly appeared either in big-budget blockbusters or low-budget flops (reviews for Deception wasn’t particularly great, though I’m still keen on checking that out when it is released on DVD). I think that with the right timing of this film’s release, more than a few people might be looking for a chance, at least, at getting into the Oscars.

Which leads us back to the West. Yes, this film might be entitled Australia, shot in Australia, and made by Australians. The money, however, comes from 20th Century Fox, which is as American as…well, apple pie (maybe). On the upside, it is owned by Rupert Murdoch, arguably one of the most influential Australians in the world. But he changed his nationality to become the godfather of American media.

I guess you can’t win everything.

Fikri apologises for the late updates. The semester-ending period is a killer…