I have to admit one thing before embarking on this review: I had no problems whatsoever with the original Ang Lee flick. Many have derided it for it’s overhanded play on emotions rather than simply bashing things in sight, but it still remains as an effective film for me. That’s not to say that there is no action in the film at all, just that they’re rather far and few in between. Like I said, though, I didn’t mind it so much, because it was a new take on the superhero genre, and one that, ironically enough, depends a lot more on the hero’s emotions than other superheroes.

Also, it made my grandmother cry. The exact moment? When Jennifer Connelly’s Betty reached out to Hulk near the end, and the big wuss softened enough to de-Hulk back into plain old Bruce Banner. It is a moment that will stay with me until the day I die: Ang Lee made my grandma cry.

But enough about that. That’s in the past. ‘The Incredible Hulk’, on the other hand, deals in the now, and it deals with a big, bad, angry hero (though arguments may also be convincingly made that he’s an anti-hero in some ways, but no matter). Actually, make that two, big, bad, angry (anti) heroes: Tim Roth surprisingly pulls off this maniacal role of Emil Blonsky rather well. Of course, he’s played nutters before in the past, but I really, really like him. You get the sense that every time he’s on screen, he just wants to cause some destruction somewhere. 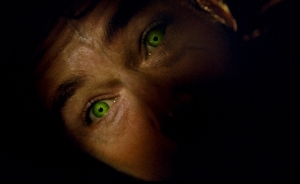 He needed to step up, mind you, given who he has to compete with on the screen. Edward Norton replaces Eric Bana as Bruce Banner (what, you didn’t know that? 🙂 ). The film starts off with Banner hiding out in Brazil, some five years after escaping the clutches of General Ross in the previous film. Having spent those fruitless years hunting him down, Ross turns to special soldier Blonksy, on loan from their mates across the Atlantic. Having managed to track him down (via a bizarre set of circumstances), they make their entry into the Brazillian slums, and try to take him back with them once again. Of course, Banner makes his escape, and decides to seek help from Betty (Liv Tyler). At the same time, he maintains correspondence with a certain Mr Blue (Tim Blake Nelson), who’s colluding with him to find a cure for his green anger.

Blonksy, on the other hand, is awed by the strength and brute physicality of the Hulk. His ego driven by it, he corners General Ross into giving him what Banner has. Ross gives in, and what we eventually have is a monster mash-up between two really big, really angry, and really strong crazy ass destroyers.

The above synopsis, in fact, could have been made simpler, and still not lose the essential plot points . At times, I feel like I’m watching a highly jacked up remake of ‘The Fugitive’ (Harrison Ford in green. Not great…). That’s not to say that it isn’t fun, though. Watching the litany of destruction that the environment goes through whenever Banner gets angry is fun. Someone once told me that there is something in our human psyche that not only secretly loves, but desires the visual destruction of something…anything, really. It is apparently why we like to stop and look at car accidents, even if they happened on the other side of the highway and causes a lot of traffic jam in the process. I don’t go that far, mind you (I really hate doing that, and curse those who cause the jams whenever that happen on the MRR2), but this is just full out fun for the most part.

If anything, I feel that the movie didn’t really do as well when the pace does slow down, and we get to see Edward Norton spying on Liv Tyler. Once again, that may well be one of our secret desires as well, since Liv Tyler has very much maintained her Elvish figure despite having given birth recently. Word is that Edward Norton extensively reworked the script to give the characters and the story a bit more kick. Somehow, I don’t think it comes off as well as the previous movies, though I have to say one thing: I am glad that the story picks up from where the last movie left off. One of the bigger worries I had was the fact that the studio had initially considered disowning the previous movie altogether (really, was it that bad?), and make another ‘origin’ movie. They didn’t go that far (though the origin part was reworked slightly in the title credits), and I think it is a good move. I don’t think that they had to savage the previous one in order to make a different film about the same guy, and I’m glad that is the case.

It means that more time can then be devoted to Louis Leterrier crashing and banging and blowing things up in imaginative ways (I especially like the Hulk using the police cars as boxing gloves. Brilliant! 🙂 ). However, at the same time, I can well understand why Edward Norton refused to have much to do with this movie when it comes to flaunting it on the red carpet and beyond. It is a career move that breaks away from the pattern for him, though ironically, had I been in his shoes, I may well have done the same thing. Actors, after all, always look for something different to challenge them. And what can be more challenging than a great big angry freak of nature?

If I go on, I will certainly be banging about the same thing over and over and over again. Great action movie, not so great on the slow parts, good Eddie Norton, great Tim Roth, beautiful Liv Tyler, and some insane destruction that kicks real ass.

Ah, how humankind have evolved…