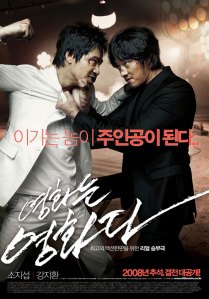 I had a fair amount of trouble titling this particular post. I saw it during the recent Korean Thanksgiving holiday (주석, or Juseok). Mind you, I had initially planned to watch ‘The Clone Wars’, but I quickly realise that when you are with a girl (though not on a date, I hasten to add), any film chosen with the word ‘war’ in the title is not a particularly popular choice (funnily enough, the first ‘Star Wars’ film had a fair amount of pressure from the studio to change its title, since studies conducted back then showed that films with ‘war’ in the title wouldn’t be popular with the better half of the population). The same could also be applied to the word ‘dangerous’ in ‘Bangkok Dangerous’, the combination of which prompted laughter rather than intrigue.

Settling for a Korean film, then, we ended up picking ‘Rough Cut’. The problem I had, then, wasn’t with the film itself…but with the title, because although the Korean title (영화는 영화다) literally meant ‘Movie is the Cinema’ (if you put it through the Dictionary.com translator), I know that Korean movies don’t do literal translations well. With this in mind, I considered the various meanings that could also be applied, until a chance visit on the excellent Koreanfilm.org website (which I haven’t visited for quite a while), revealed ‘Rough Cut’ as the English title. Once you bear in mind the general idea that the film tried to achieve, then you’ll realise how apt a title it is.

An actor, Su-ta (강지환, Kang Ji-hwan) has a problem. Though a popular figure with the majority of the public, his tendency to lose his temper during film shoots and actually hurt other actors in fight scenes is causing him to lose his stock…and quickly. So much so that, as another actor falls before him, the production was halted due to a lack of actors who is (understandably) willing to take up the role opposite him.

Enter, stage left, Gang-pae (소지섭, Seo Ji-seop). He’s a real-life gangster, a badass in every sense of the word. He also harbours an ambition of being…an actor, spending time watching movies by himself when he’s not busy beating the living hell out of those who cross his path. One of these paths leads him to Su-ta, who, by now, is desperate for someone who can help him finish the production. Eventually offering Gangpae the chance to fulfil his dreams, the offer was accepted (on the condition that they fight for real when the cameras are rolling), and so began the blurring of the line between real-life and the movies.

I can see the main issue that the film tries to tackle; namely, that of the blurring of the lines between fiction and reality. For this, the film is one which should be applauded for. It’s not everyday that such attempts are made, and based on the idea itself, I would have heartily recommended it to those who are looking for something a little bit left to the field. Nevertheless, while the heart of the story remains true, the subject matter itself is sugar-coated with such commercial sweetness that I find it to be almost the same like any other movie. This is not saying that it is a bad thing; rather, I find that it has somewhat missed an opportunity to be something different.

I say this, because I personally find myself being overloaded on a lot of the violence and action. Sometimes, even the simplest of arguments are solved with a heavy-handed slap to the back of the head. Perhaps this is a reflection of Korean society at large; if this is the case, then perhaps my beef is more with the society, rather than the film’s attempt to portray it. These are my biggest reservations with the film, though I suspect that many of you who do read this will not attempt to hold such a high standard to this film. The story also lost me halfway through, before gaining me back before the final third. This, however, might be partly attributed to my still-unsatisfactory grasp of the Korean language (to me, anyway), but even my Korean friend turned to me and asked what that part was all about. Perhaps, then, a part of the fault lies with the story as well.

Lest I be seen as criticising this film from the off…I am not. Though I don’t find that the above worked for me, I find myself In fact, I had quite an enjoyable time watching the movie. The director, Jang Hoon, attempts to pepper the scenes with plenty of humour. The humour may turn out to be the saving grace of the film, actually. With Gangpae playing the straight guy to Su-ta, at times their interactions are absolutely priceless. “Who do I sign this to?” asked Su-ta when they meet for the first time, and Gangpae asked for his autograph. “Gangster,” came the reply. Another source of absolutely priceless humour is the director of the film-in-the-film, Bong (고창석, Goh Jang-seok), whose bumbling attempts to mediate the discourse between his two stars are just LOL funny at the best of times. Though not entirely intentional, one can imagine this to mock Michael Moore, somehow, given their physical similarities. 🙂

Nevertheless, the main spotlight of the film falls on the main players themselves. Out of the two, I feel that Seo Ji-seop is the one who comes out on tops. He has quite a screen presence, a sense of charisma, every time he comes on. With such presence, he is able to steal the scenes even without uttering a single word. It’s quite fortunate, then, that he has little dialogue to actually play around with. I am not particularly familiar with any of the players in the film, unfortunately, but I suspect that my admiration for Seo will most probably grow.

On the way back, as we made our way into the subway, my friend pointed to the face of a Korean man plastered all over the side of a wall. It was an advertisement. “You know who he is?” my friend playfully asked.

If he plays his cards right, pretty soon, you’ll know he is, too.

Fikri is tired, and wants to sleep.