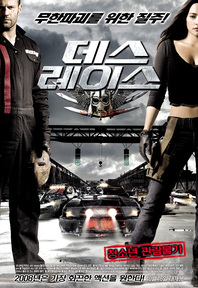 When I was younger, I used to play a particular game on the PC called ‘Hi-Octane’. I didn’t much about computers then, let alone its games, and ‘Hi-Octane’ is a simple enough game to describe: you race with other cars around the track, and try to shoot and blow them up at the same time. Quite how enjoyable it was for me as an 11 year-old might be cause for some concern for my child psychiatrist of a mother. Then again, she was the one who bought the computer to begin with, and the game just happened to be bundled along with it. I suppose we could make a slight argument that it was partly her fault. That, and the fact that the other game, ‘Magic Carpet’, was so infuriatingly difficult to play I didn’t even bother beyond the first level.

It might appear to be an interesting place to start a review of a film made in 2008, but it is the memory that popped in my head the most as I watched ‘Death Race’. That, and how glad I was to be watching such a mindless movie. Why?

Well, in between the reviews of Malaysian movies and how they did at the Pusan International Film Festival, there comes a point where there is…too much. Not necessarily of Malaysian movies, but perhaps of movies that has a considerable amount of artistic value in them. Art movies, some say. Indie flicks, others claim. “Filem kerut muka,” a Malaysian actor once apparently said. I say apparently, because I got the information second-hand, so I can’t quite say that Afdlin Shauki said it, but it’s a damn good way of putting it. 🙂

What I need, then, is a movie that breaks the monotony and doesn’t require a lot of thinking. Given that the next filmed lined up was ‘Cicakman 2’, some might also argue that I should just get on with that one instead. Two birds, one stone and all that. But I might as well get ‘Death Race’ off the starting line and out of the way for now. It is unfortunate, then, that ‘Death Race’ is such a loud and, at times, mindless (polite word for ‘stupid, plenty of plotholes’), that my brain cells were left rattled. Fortunately, there’s plenty left intact enough for this review.

The year is set in 2012, where the economy of the United States had fallen off the chart so far that the prison system is privatised. In the system, they find that making guys race and kill each other on a prison island can be a profitable one. This is where we come in, with the start of the movie beginning at the near end of a race. Frankenstein (voiced by David Carradine, who starred in the original film, ‘Death Race 2000’), a masked racer, nearly wins his fifth race. Had he won, he would have been granted his freedom, as it is the reward for those who have won a total of five races. Unfortunately for him, he was taken out by Machine Gun Joe (Tyrese Gibson), who takes the victory instead.

We cut then to Jensen Ames (Jason Statham), a factory worker who is completing his final day at work before being laid off (interesting how the film was released at a time when similar concerns are abound in the real world). He didn’t mind it too much; he would have enjoyed spending time with his wife and child. Would have is the key operative here; they were murdered, and he, accused of the crime, is sent to the Terminal Island prison. There, the warden in charge, Hennessey (Joan Allen), tells him that he would be granted his freedom is he agrees to don the Frankenstein mask and win the next Death Race.

Sounds simple, no? That’s because it is. I have just described to you the entire setup of the film, all of which takes place well within the first half-hour. The rest of the film is pretty much filled out with gung-ho, adrenaline driven race sequences and bouncing tits in slow-mo (you’ll see). Make no mistake about it; this is a Paul W.S. Anderson film in every single way, and he knows very much how to market this film to the target audience. Perhaps because of that, he doesn’t stray far beyond his comfort zone, and what you’ll see here happens to be plenty of the things that you’ve seen before not just in his previous films, but in many others. Think elements of ‘The Condemned’, ‘The Running Man’, ‘Rollerball’, and…err, ‘Rollerball’ again. Jason Statham working out with his shirt off, showing (selling?) his body…that’s Will Smith in I Am Legend. Natalie Martinez with her boobs bouncing in slow mo? Every other Hollywood popcorn flick. The crazy race that is the actual Death Race itself? Well…it’s the original ‘Death Race 2000’, with the exact same premise.

A slight pity, then, that the film didn’t quite become what it was originally envisioned as earlier this decade. Back then, with Tom Cruise set to produce and star, it sounded like something that would have been a film that would have been more different. Perhaps, with a bigger star value and better marketing, this film could and would have done a lot better. Macho he may be, but Jason Statham has only one face, one voice, and one act, and that is himself. If you like him or his films (which I do, incidentally, for what it’s worth), then there will be something here for you. The race scenes and the cars themselves are quite well-done as well, but it’s very much a style-over-substance approach.

With a little bit more sense, the story and the logic could have been a little stronger (why oh why would anyone want to kill the very assets that is making them a lot of money to begin with?). A part of me wanted to shout out how terrible this film was, though another part still remembers Steven Spielberg saying that Michael Bay is one of the most visionary directors in Hollywood today. And Michael Bay’s films tends to be…Michael Bay films. Stylish, but with not a lot of substance in between the bread. Paul W.S. Anderson, then, could well be considered as the poor man’s Michael Bay.

You’ll get exactly what it says on the tin with this picture. No surprises, no unexpected turns, pleasant or otherwise. It is a little mindless, and coming off the back of the string of intellectual films, I do get some enjoyment out of it. Within the bigger picture, though, I suppose there are better ways of spending your time and hard-earned cash.

Like searching for the ‘Hi-Octane’ game online, for example…

One thought on “Shoot ‘Em Up – Death Race”