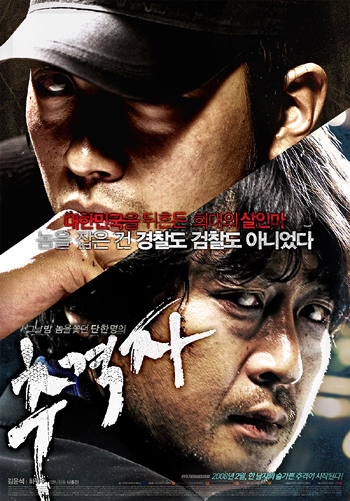 There is a scene in the Korean movie, ‘The Chaser’ (추격자, pronounced as Chugyeokja), that stayed with me long after the film finished. A man, arrested for throwing a pile of shit into the face of the mayor of Seoul, is shouting at the top of his lungs to the police commissioner standing outside of the van. “Who is that?” asked the commissioner to the police officer. “He is the shit-thrower, sir.” “Well, what does he want?” “He wants to go to the toilet, sir.” I have to admit to laughing my ass off (before putting it back on to continue with the film), for it is something that I did not get watching it the first time around (without the subtitles).

Therein lies the trickiness of such reviews. Despite the fact that it is very possible to watch and still enjoy a film without it, you can miss out on a fair number of the minor things that makes a film experience more complete that it would have been, the subtle things that would have lifted a film from being very good to being very, very good indeed.

Which may sound rather obvious, actually.

This is not to say that all subtitles are good, but certainly it is a tool that can help to better bridge the gap between misinformation and understanding. This might seem obvious, but I start of with this, because I have recently seen the film again, on DVD, with the accompaniment of English subtitles. This time around, I am even more impressed with the accomplishments of the film, and I can safely say that ‘The Chaser’ is arguably the most detailed film I have seen in a very long time.

What does that mean to you, ‘detailed film’? What it means is that almost every little fact/fiction that you find in the film has a key role to play in the development of both the story and the characters. Things are kept hidden from us and the characters, unveiling themselves in the most natural of ways.

The story, on the surface of it, doesn’t seem particularly complex. We take the point of view of Jung-ho (Kim Yun-seok, 김윤석), who is a ex-cop-turned-pimp. He doesn’t seem like a man with much sympathy, nor remorse: he routinely forces his girls to go out and service the clients, even if they’re not well and would rather be home with their children. There is more than a hint of his protectiveness, however: in an early scene, he comes to the aid of one of his girls who was being abused by a client. Here he is, a knight in not-so-shining armour, and proceeds to beat the client almost senselessly. By this, I mean slapping the guy around the head almost non-stop (it’s an aspect of Korean culture that I don’t quite get; people like to slap each other around the head if they’re not feeling particularly pleased. You can check this out in plenty of other movies).

A part of his aggressiveness can be attributed to a number of his girls going missing after having visited their clients. Believing that somebody out there is selling his girls (maybe even a rival pimp), he sets out to discover the truth. He realises too late that one of his girls,  Kim Mi-jin (Seo Yeong-hee, 서영히), whom he sent out to that particular night, may well be the person in question. Unfortunately, the truth is not as simple as that: the that client, Ji Young-min (Ha Jung-woo, 하중누), turns out to be a serial killer. Even when the truth is uncovered, and he admitted to the wrongdoing, there is still the slight problem of finding the evidence of his wrongdoing to stick on him within 12 hours of his arrest.

In many ways, it reminds me of an aspect of the classic Clint Eastwood film, ‘Dirty Harry’. I saw that film again recently, and the parallel of being able to catch the purported criminal and yet be powerless to do anything about it becomes rather obvious after a while. However, don’t think that I am spoiling it for you. The title could very well refer to the chase that is on after the killer is caught. It could also refer to the main character of Jung-ho, who does most of the running in the film. I half-expected it to be renamed ‘Run, Jung-ho, Run’ instead.

Obviously, that did not happen. What does unfold before your very eyes, however, is an incredibly graphic film. Let me put it this way: when the killer attempted to hammer a girl’s head, you will see the killer attempting to hammer her head. It is rather tastefully done, in a way. The blood that flies all over the place are some of the most beautifully shot blood I’ve seen for a while as well.

Not that everything is shown. The fast-paced cutting really gives us no room to breath, as we are relentlessly shown the development of Mi-jin, Young-min and Yun-seok. It is a testament to their abilities that I am able to garner some sympathy for an uncouth pimp who’s only interested in his girls’ abilities to make money for him. I felt fear for a girl whose helplessness was scary, and loathing for a killer whose arrogance was absolutely galling. Hard to believe that this is a feature film debut for Na Hong-jin, and even harder to believe that he’s hardly even thirty years old (having already met him, but then again, I am not a good judge of age). He creates the pieces, and it falls into place nicely.

The attention to detail (keys and phone numbers also have their roles to play), almost faultless logic (I suppose nothing is faultless, but I leave this up to you to uncover) and the relentless energy of almost every scene kept me hooked on the story. No surprise, then, that it is the 2nd biggest hit in Korea for the year, beaten only by the big-budget, superstar-laden ‘The Good, The Bad, The Weird’. There’s even serious talk of this being Korea’s nominee for the Oscars. There are few other films this year that can seriously challenge that suggestion, but even if there were, it does not take anything away from this film. I look forward to both the director’s next film and the inevitable Hollywood remake.

Fikri feels that the bar has been raised higher for him. Dammit…