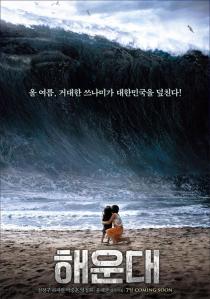 I was never really that taken by ‘The Day After Tomorrow’ and other such disaster movies. A big part of the reason is the personality of the locality. I am not talking about the location’s charisma (surely, few places are more charismatic than New York). Rather, it’s one based more on the personal experience I went through. I have never been to New York, and so, watching it as the Emmerich-Devlin team destroyed it countless of times in ‘Independence Day’, ‘Godzilla’, and the aforementioned ‘Tomorrow’, it did not hold as much resonance as it might have done with others. For what it’s worth, the films were generally fun to watch.

‘Haundae’, however, promises to be different. It is the name of a beach in Pusan, Korea, a place that I’ve been to twice before, and plan to visit again before my time in Korea ends. It is a place of many good memories: long nights on the beach, the beautiful girls by the plenty, the same goes for the films, and chucking Singaporean filmmakers into the East Sea all rank highly.

It is also the main setting for the film in question, ‘Haeundae’.

In short, it is a disaster film set in Korea, but the roots of it began long before in Indonesia, around the time of the previous tsunami. Man-sik (Seol Kyeong-gu, 설경구) was a fisherman at the time, working along with his father and several other fisherman of the same ilk. They happen to get caught in the tsunami, and though Man-sik was saved, his father was not. It is a guilt that lives with him as we move around half-a decade forward, and it is the present time in sunny Pusan. Since the incident, Man-sik has drifted along, operating a small seafood restaurant by the beach with his girlfriend, Yeoh-hee (Ha Ji-won, 하지원).

He still suffers nightmares about the tsunami, but in spite of all this, he is still trying to make progress with Yeon-hee, practically agonising over the best way to propose to her. Breaking the routine amongst them is Hyung-sik (Lee Min-ki, 이민기), his younger brother and a coast guard. Though appearing a little air-headed, it is his chemistry with a girl he rescued, Hee-mi (Kang Ye-won, 강예원) that provides a fair amount of the romantic comedy relief. Though their meeting is accidental, they continued along a more purposeful path. The same could be said for Kim Hwi (Park Joong-hoon, 박중훈). He is a geologist with prior experience of the Indian Ocean tsunami. Seeing similar patterns emerging, he spends a lot of his time trying to raise the alarm. However, the Disaster Prevention Agency didn’t see the need to do so, constantly shutting him down despite the impending sense of doom. With all this in play, he also has to learn to deal with his ex-wife, Lee Yoo-jin (Uhm Jung-hwa, 엄정화), who he meets in Pusan for the first time in a long time. Consistently left out of a lot of synopses is Oh Dong-choon (Kim In-kwon, 김인권), a man who spends almost all his time looking for an easy way to make some quick cash.

There are also other characters involved, of course, with the film practically on the verge of being one of those multi-character, multi-plot excursions that could easily and quickly go south. However, each character here, it must be noted, does not exist almost by itself, but in relationship with someone else, and it is this relationship that defines their roles in the film. Clearly, Man-sik and Yeon-hee is way out in front in terms of screen time. That is a reflection of their star status in a film of many stars, and unfortunately, in this film at least, and being relatively familiar with Korean films, I cannot look past Sol Kyeong-gu’s and Ha Ji-won’s celebrity. For some reason, I get the sense that they are ill at ease with their roles. A similar sense pervades with Park Joong-hoon, but not so much because of his own fault; I just kept thinking of Dennis Quaid in ‘Tomorrow’. Uhm Jung-hwa’s performance, on the other hand, feels a lot more natural, but then again, it is one that I think is similar in style, if not substance, to a lot of her previous roles. This is not to say that they do a good or a bad job, however. It probably doesn’t help that if their characters aren’t such caricatures to begin with, with not as much development as I would have liked to see here. For what it’s worth, I did enjoy the interplay between Hyung-sik and Hee-mi. Funnily enough, looking back, I realised it may be the most developed relationship throughout the film. The comedic gem that is Dong-choon is a relief, in more ways than one. Even in such heavy, disastrous moments, he managed to keep things light, which made the film all the more enjoyable for it. The drama parts didn’t shine as much, but the comedy part certainly shined brighter.

However, I can sit here and bitch and moan about the acting and the script all I want. The truth of the matter is, no one, and I mean absolutely no one, is coming to watch the stars. Ironic, really; I reckon the reason the stars were in the film was because the producers wanted to insure their investments, and makes sure that bums are put in seats. Rather, people (all five million of them and counting) are coming to watch a place that they know (well) get absolutely hammered and destroyed. There is a deeper, more psychological and philosophical question that lies within that. Any attempt to answer that, however, may well result in a post that will not quite end within 1000 words, so I’ll just say that there is intrigue that lies in there somewhat. Perhaps it is a fair reflection of us as a race: a part of the human race just likes destroying things. And in terms of destruction, this is where the film earns its won. While the film is named after the beach in Pusan, it feels like half of the city was smashed by the tsunami. The computer-rendered tsunami waves feels a little off from other films of the same ilk, but that is not a biggie. Is it cutting edge? No. Is it something still well-done? Yes. The production design for the non-CGI parts were impressive; some of the camera angles and editing was interesting, and feels rather fresh. It is this freshness in destroying the city that makes the film a little bit different than other disaster films.

Freshness in destroying the city. Now there’s a sentence I never thought I would write.

It is just a pity, then, that the tsunami came in late in the film. I gathered that we were at about the 70% mark of the film when the waves finally did come crashing. For my part, I can understand what the director is trying to do, trying to build our sympathy and empathy for the characters. However, it took a little bit too long to get to the tsunami, and in that time, I could feel my own attention waning, and similar things could be said about those around me. If it weren’t for the comedy value, then I may well have just shut my eyes as I wait for the tsunami.

I kept thinking that there is something else that I have missed in this review. It doesn’t appear to be or attempt to be a realistic portrayal, which is an important thing to bear in mind. However, at the end of it all, I realise that in so many ways, this review does not really matter. I think I have managed to describe and articulate the main gist of my own feelings about this film, but no matter how much I kick it or salute it, it doesn’t really matter.

It is not quite a disaster of a movie, but it’s a disaster movie that you’ll find attractive or otherwise on your own accord.

The filmmaker that Fikri helped throw into the East Sea will have a short film, ‘Cold Noodles’, shown at the upcoming Pusan International Film Festival. Welcome back, Kirsten Tan. 🙂 ‘Haeundae’ will be released in Malaysia under the name ‘Tsunami’ later this year.