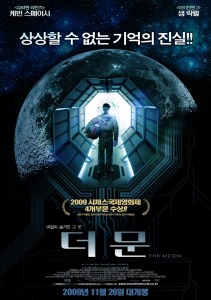 The Sam Rockwell-starrer, ‘Moon’, cost five million dollars to make. Five. Million. Dollars. I know it sounds like a lot, and in truth, five million is certainly nothing to sniff at. Nevertheless, within the context of the megabucks that ‘New Moon’ has been pulling in at the box office all over the world these past weekends, it does do well to put some things into perspective. I mean, five million dollars? That wouldn’t even get you half of Hugh Jackman. It wouldn’t even get you half of a half (though it might get you one fifth, if reports that he received $25 million for his efforts in ‘Wolverine’ is anything to go by).

And so it is for Duncan Jones first feature film. Five. Million. Dollars.

And boy, did he know how to make it go far.

I first heard of ‘Moon’ some time earlier this year, when the buzz around it was steadily growing. I do like to keep an eye out for these kinds of movies, and the concept sounds nice enough. For those who may not know, ‘Moon’ is supposed to fall firmly in the sci-fi camp. However, as is sci-fi does these days, it goes slightly beyond that, into the realms of an entertaining, interesting, and rather thought-provoking films.

We follow the story of Sam Bell (Rockwell), a man who is coming to the end of his three-year contract, having been stationed on the moon (obviously enough). His job, as an engineer with Lunar Industries, is to mine for Helium-3. In the near future, this would be the main source of energy for Earth, and so one man would have to remain on the far side of the moon at all times, mining all that energy. Ably supported by a robot assistant named GERTY (voiced by Kevin Spacey), Sam kills the loneliness by communicating with his wife via delayed recorded messages (the damaged satellite link up with Earth didn’t allow for live communication). Counting down the days until he’s done, he begins to hallucinate, causing an accident with one of the mining machines on the surface of the moon. Waking up in stupor, he was able to eavesdrop on a live conversation between GERTY and his bosses back on Earth. Aiming to fix the damage, he goes outside to the mining machine…and finds another, completely identical Sam Bell.

Intriguing? I find this to be so, though I don’t suppose it is actually new territory for sci-fi films. Having said that, as I have said earlier, I feel that it is not just a movie that is mired deep in the sci-fi genre. It is, in many ways, a drama, about one man who wants to get back to Earth, but finds himself stuck in a situation that is totally and utterly confusing to him. I have to say that there’s a lot of details here that makes the whole thing feels more like a mystery. Throughout the film, until near the end, I find myself thinking and being totally driven, as an audience member, by the question ‘why’. The director has subtly left clues here and there, raising more question marks than answers. He even has a very keen sense of humour: in an early scene (during the credit titles, actually), Sam is exercising on the treadmill wearing a t-shirt that says something like ‘Wake me up when it’s the end of time’ or something to that effect. His alarm clock plays the song ‘The One and Only’ by Chesney Hawkes (what a blast from the past!), not without a hint of irony.

Getting even deeper, there’s more than a few hints of Koreanisation about the place. The moon base itself is called Sarang, meaning ‘love’ in Korean. In fact, ‘sarang’ in Malay (or Indonesian) means ‘nest’, which probably would have been more appropriate given the fact that the base pretty much serves as his nest; going out of it would be to venture into the unknown. Alas, there is no mistaking the meanings, since ‘sarang’ was also accompanied by Hangeul letters. More interestingly, there was a Korean word that was used in one point of the film, to say ‘goodbye’. There are two ways of saying goodbye in Korean, one to a person that is staying, and another to a person that is leaving. Paying close (and somewhat subconscious attention to that scene), I was a little shocked to find that it jumped out at me like big, flashing beacon that would truly reveal the nature of the beast. It is in such little details that the devil is hiding. There are numerous smiley signs made by Sam next to his toilet; in the next scene, they’re gone. Is it a mere continuity error, or a hidden clue? That post-it note on GERTY…it says ‘Service Rover 3…BOOM!’ Is it a mere effort by Sam to remind himself about something…or could it be about something that will happen? Whose side is GERTY on? Is he even on anyone’s side?

And so this is what the experience is like watching ‘Moon’. Watching the movie, you’ll soon realise that you’re not supposed to be closing your eyes even for a single frame. You’re supposed to pay attention to all the little details that makes this more than just enjoyable, it made it intriguing. Editing my graduate film with my editor now, I find it interesting to note the differences in our approach. His is borne out of a desire to make things easier for the audience. I, on the other hand, go with what I feel is best for the film…and the audience be damned. I kept thinking about our discussions as I watched this film, because Duncan Jones has managed to create a film that does not merely inform or entertain, but can, in many ways, serve to illuminate us about ourselves. At the very least, the questions will drag you all the way to the end of the film. It is scary when it needs to be, funny when it can be, sad and poignant when the moment calls for it. It is, however, consistently and always intriguing, on one level or another. Helped along greatly by the performance of Sam Rockwell (one man show…he must be a Cylon!), and the music of Clint Mansell, I sincerely believe that ‘Moon’ is not only a movie worth watching, but one worth checking out over and over again for all sorts of little Easter Eggs throughout the film.

And by the end, you’ll forget that it cost one fifth of Hugh Jackman to make.

Or that it was produced by Sting’s wife.

Fikri had not heard ‘The One and Only’ for almost a decade. Brilliant.