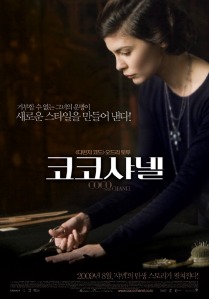 ‘Coco avant Chanel’ tells the story of Coco Chanel, the French fashion designer who spawned the eponymous Chanel company. Thus, you might expect a lot of very nicely designed clothes, lovely colours, and stylish statements all throughout the film. In a way, I can understand that, because I had a lot of the similar expectations. It is, after all, nominated for the Oscars in the Costume Design category; it’s got to be something, right?

Wrong. I’d say the above statement is a lie, but then again, perhaps it’s a matter of getting ahead of ourselves beforehand. Key word: before. The English title is a direct translation of the French one, and ‘before’ is what ‘avant’ means.

Thus, the story is not one of Coco, but of Gabrielle Chanel (Audrey Tautou). She, along with her sister Adrienne (Marie Gillain) is left at an orphanage by her father. Though she longs for it, her father never returns for her. Years pass, and they both end up working in a bar as performers. This is key, for two reasons: the nightly song she performs with her sister is called Coco de Trocadero, and one of the regular customers at the time, Baron Etienne Balsan (Benoit Poelvoorde) finds her attractive enough. She, on the other hand, is attracted to the entry he grants her into French high society. I shouldn’t say grant as much as barge into, for it is precisely what she does (but more on this later). She became friends with an actress, Emilienne (Emmanuelle Devos), who provides her with a more stable platform with which to expand her talents: by (re)designing her hats for her. More significantly, however, she ends up falling in love with Arthur Capel (Alessandro Nivola), an acquaintance of Balsan, but as their relationship progresses, things get more and more complicated. Adrienne also ends up marrying a baron, but their relationship is one that not as celebrated as it should be, perhaps. Her in-laws do not approve of her, considered to be of a lower class to them; they never even bother meeting her.

And it is on this note that I shall start writing in the earnest, for this is one of the most interesting things about the films for me. Let’s face it, Audrey Tautou is an arrestingly beautiful young woman, and no matter the role she plays, it is difficult to take your eyes off of her. So why is it that Balsan, who actually mistakes her visit to him to be something less permanent, decides to hide her away? Whenever he is hosting his parties, she is often demanded to remain invisible, to remain away from the prying eyes of the crowd. Yet there she is, having dinner in the kitchen like one of the servants. Of course, it wasn’t like there was a sign informing her of this. “Please give me another napkin,” she requested of the butler, “this is dirty.” “No, miss,” he politely (condescendingly?) informed her, “that is your napkin.” “Oooh,” I quietly thought to myself, “you bitch.” 🙂

She is eventually introduced to the rest of his friends, but even then its in context of being a plaything: she is demanded by Balsan to perform her song once again, the same song that she sang previously. Distressed by this, she leaves, for she is a person, an identity, a true spirit who yearns to be acknowledged without any links whatsoever to the differences in class. Yet it is also this difference in class that she sought to cross. Her situation mirrored that of her sister’s conversely. She didn’t come to Balsan because she was in love with him. Nor was it a matter of physical attraction, which she admitted to her sister. More telling, however, was her summary of a book she had just read. “It’s the same story as always,” she told her. “Blanche, the little orphan, overcome all obstacles and marries a prince.”

Initially she was overwhelmed by his richness, and laps up his almost every word. Despite her exterior strength, she believe that he is her way out of her current life. Though at first she was happy to perform when asked to, to abide by the rules when she thought it was required, slowly she started to grow, to mature, and to become not just a young woman depending on a man, but to go beyond that. It was love affair with Arthur Capel that would define her more than any other, though: “You’re different. You have to trust yourself.”

Though I have concentrated a fair amount of this write up on Audrey Tautou, it should be noted that the rest of the cast also deserve whatever plaudits that may well come their way. This is perhaps the best I’ve seen of Alessandro Nivola. He actually looked the part of an upper class businessman: multilingual, elegant, refined. It is in stark contrast to Balsan, whom I’d argue is the true panel to play off for Nivola. He might be in love with Gabrielle, but it is Balsan who is his true opposite here, and he is played wonderfully by Benoit Poelvoorde. He’s loud, he’s boisterous, he’s a lovable playboy, the life of the party, and someone rather difficult to say “no” to. Yet at the same time, he is also somewhat pitiable in a way; he remains a gentleman all the way to the end, despite whatever feelings he may have for Gabrielle. Difficult not to like people like that.

Difficult, also, not to like the music. Alexandre Desplat was nominated for his work with ‘Fantastic Mr. Fox’, but I do not think that means that his work here is any less superior. It is calm, soothing, elegant, beautiful. At times, it threatens to rise to become an instant-classic, in the sense that you could close your eyes for some of the scenes and imagine one of the past masters coming back to life to compose it. I especially like the part when Capel takes Chanel away for a short holiday. The scenes were beautifully shot (by the seaside, and when they were dancing at the ball), but it was the music that made it special. Beautiful stuff.

Just as beautiful are the art direction. I did write that this movie was nominated for its costume design by Catherine Leterrier (any relations to Louis?), but the costume is a part of an art design that quietly says elegance and class in all the right manners. Even in some of the ‘poor’ scenes, you could almost feel the quality of the nun’s clothes, the authenticity of the bricks on the walls, the warmth of the little lace dresses. Quality all the way.

The fashion, as it turns out, rarely comes into it. You’d see scenes of her doing some modifying for her friends, but even then it wasn’t so much a revolution of epic proportions, but rather, a snip here and a snip there that aimed to be as comfortable as it was stylish. No epic montages of her cutting bits of cloths in this film, that’s for sure.

In the end, this film turns out to be something that is rather pleasant to watch on a slow Sunday afternoon. If you’re looking for something more instant, more gratifying, then this is probably not for you. Right from the first scene all the way to the last, everything is incredibly measured, restrained, subtle and somewhat slow. That’s not to say that it’s not worth watching, because it is precisely those values in the story, the acting, the art direction and the music that makes this movie a satisfying experience.

And oh so beautiful.

One thought on “I’m With Coco – Coco avant Chanel”