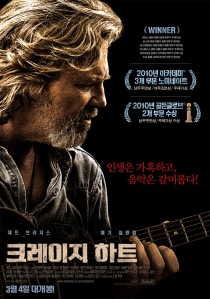 It’s funny how falling feels like flying…before you hit the ground.

He (Jeff Bridges) is a washed-out, 57-year-old country music star who has a problem keeping his act straight on the stage and out of the bottle. Once a legend, still is a legend, but even legends have to perform in bowling alleys to make ends meet (without being able to put his drinks on the tab, to boot). His nights may be cheered up by the odd women in cheap motels, but it wouldn’t last that long before he turns back to the bottle and hit the road in his beat-up car, traveling across the beaten path of the old road once again, trying to make ends meet and keep his manager of his back.

She (Maggie Gyllenhaal) is a relatively young-ish journalist for a small-time, small-town newspaper. She has a young son who she adores, and she also has a deep interest in country music. The two of them sit down after a show for an interview, and so began a love that seems to be so pure, so genuine that it could potentially change their lives forever.

Sounds very normal, doesn’t it? It seems like a story that has been told before: old star working his ass off to make ends meet by dropping names and relying on his previous exploits. Fazil wrote that this movie is this year’s ‘The Wrestler’, and he’s not far wrong, in all respects. Estranged family relations? Check. A somewhat inglorious end to a glorious career? Check. A beautiful lady waiting in the wings, offering the main star a way out, a way back to life? Check. The star being somewhat haunted by his demons to the point that he couldn’t really accept, even if he wanted to? Check.

I was tempted to write down and out star played by a down and out star. Then I realise that it’s not quite the same parallel with ‘The Wrestler’, so no ‘checks’ there. Jeff Bridges, for better or for worse, wasn’t in the same position as Mickey Rourke. Mickey Rourke took all of his troubles and let it all go on the screen. In turn, he landed a role in the ‘Iron Man’ sequel. Jeff Bridges, on that other had, was still in a comfortable enough position in his career; in fact, he was in the first ‘Iron Man’ movie. Nevertheless, if we were to take the tag line from the movie seriously (“The harder the life, the sweeter the song”), he must have had some demons within him, because this movie depended on him like a newborn on his mother. Jeff Bridges totally carried this film, being in absolutely every single scene of the movie. On his face is etched the pain, worries, and suffering that a man of his age, country star or not, would probably go through. At times, I even struggle to truly identify what he is saying, because he slurred some of his lines so bad even his mother probably wouldn’t recognise them. Fazil wrote that “you feel as if he is living that character off the set. It was so natural that it was difficult imagine him as someone else.” There’s little else I could add to that.

There is another difference to ‘The Wrestler’. In this film, Bad has a protege, Tommy Sweet (Colin Farrell), who has gone on to bigger and better things. In fact, he is arguably the biggest country star around. It is shown when Bad rolls into one of Tommy’s concerts; whereas he would arrive by himself and no one else in tow, Tommy has a fleet of buses, loads of trucks, and armies of people at his disposal to prepare for his concerts. It’s easy to imagine Tommy as the sort of character who would backstab his mentor (especially with someone like Colin Farrell, with all that beard, playing him), enjoying the sweet fruits of his labour without turning back for a second. In truth, however, Sweet is a man who still remembers his mentor fondly, going as far as to tell his own fans about him: “Don’t you want to get his autography as well?” Unfortunately, a blank stare and a hesitant answer only serves to mark the differences between the two men even more.

He tries to held Bad get back on his feet, offering him money and deals for him to write songs. Bad, however, doesn’t really want to do that, preferring instead to rely on the songs that made him into a star once (could his reluctance be interpreted as a metaphor for wanting to live in the past?) Eventually, though, the corner is predictably turned, and he writes ‘The Weary Kind’; it would become such a big hit it would go on to win an Oscar.

OK, so the last part wasn’t quite true within the film itself. It didn’t mean that the song wasn’t nice, though. It doesn’t mean you won’t get involved with the dramas of the characters, of the subtle acting of Maggie Gyllenhaal (check out the part when Bad gives her a call after his concert with Tommy Sweet: the surprise shifting to the pleasant shifting to the relief mixed with ‘what do we do now?’), or that you won’t come away wishing that things had turned out differently for Bad. A feeling borne from the fact that you really, really want everything to work out well for everyone involved. On that front, the movie is a big success.

A nice and pleasant movie to watch, and much like the star himself, you can’t begrudge the success of everyone involved.

Fikri can play the guitar.