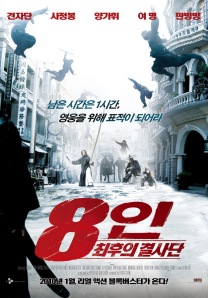 I am a klutz when it comes to history, and especially Asian history. When we talk about Asian history, a large part of that will have to deal with Chinese history, and it is a history that has been put on film many times in many different ways. In ‘Bodyguards and Assassins’, the director, Teddy Chan takes a look at a moment in history that, without the art of film, may well have disappeared into nothingness. There is always books, of course, but it doesn’t quite does the trick of (re)establishing history as movies does.

And so despite the star-studded cast that adorn the poster, it is not the main attraction for me. Rather, it is the fact that the film is largely about the visit of a certain Sun Yat-sen. He is a Chinese revolutionary who brought down the last Dynasty in China. He sticks in my mind like a sore thumb, however, because many, many years ago, I edited a video that has a lady talking about him. It was on a study trip in Penang, and the site that me and my fellow classmates visited was apparently important to him, one way or another. In editing the videos, I had to go through all the moments over and over again, and there’s something about the way the tour guide said ‘Sun Yat-sen’ that is peculiar. Funnily enough, despite having had it hammered into my consciousness for a while, I didn’t really think about it up until now.

Ah, the perils of memory. Such fun and interesting intros to film reviews they make for.

The aforementioned Sun Yat-sen (known as Sun Wen in the film, and portrayed by Zhang Hanyu) is a revolutionary both loved and loathed in equal measure. He is loved by many in Hong Kong for his plans of overthrowing the Qing Dynasty, largely viewed as corrupt and decadent. Pushing his plans ahead, full speed, he intends to come to Hong Kong to have an important meeting with members of his network. Unfortunately, the Empress Dowager Cixi hears wind of this, and sends a group of assassins to kill Sun Yat-sen. Led by Yan Xiaoguo (Hu Jun), it sets the stage for a monumental battle to take place in Hong Kong (then known as City of Victoria).

Of course, Teddy Chan is smart enough to know that merely such historical nuggets won’t equate to asses in seats. He anchors all of this within a group of people who are in Hong Kong, and makes the everyday heroes that you and I can relate to. To this end, Teddy Chan makes the dramas and conflicts of the friends and families of Li Yutang the main focus of the film. Li Yutang (Wang Xueqi) is a business man who was reluctant to pick any one political side, though he does have friends and offers financial aids to his friends. One of them is Chen Shaobai (Tony Leung Ka-Fai). He is the chief editor of China Daily, a newspaper that Li Yutang owns. It is when Li Yutang is threatened with the closure of his newspaper that he decides to take action. In truth, he is responding to the flow, with his son Li Chongguang (Wang Po-Chieh) and rickshaw puller A’Si (Nicholas Tse) already some way down the path. Helping to organise the proceedings, he enlists the help of a down-and-out beggar (Leon Lai), a giant of a disgraced monk (Mengke Bateer), and a policeman (Donnie Yen), amongst others. And then there is the third force of the British themselves, represented here by the police chief (Eric Tsang) a friend of Yutang who is sympathetic to him but has his hands tied by red tape.

Representation may well be the key thing here. Looking a little closely at Yutang’s family, I detect more than just a little parallel with the bigger picture at the time. For example, Chongguang is someone who respects his father, but yearns to do more for the revolution. As a result of that, he is constantly at loggerheads with his father, who did not want him to be involved with the fight in any way. Chogguang could be seen as a representation of China itself, the China that wants to break free from the past and deliver a better future for itself. Yutang, it must be said, do not have hands that are totally clean; he supports the idea behind the revolution (he even supports financially the fight that Shaobai is fighting, but does not want to explicitly voice his support explicitly. He becomes particularly angry with both his son and Shaobai for influencing him. However, in the film, this does not do, for the story structures an ‘us against them’ mentality, as Shaobai argues that he cannot go on sitting on the fence for much longer. He becomes particularly angry when the government issues a command to shut down his newspaper, and it proves to be a tipping point within the film. There is no middle ground here, only for those who wallow in black and white.

In the beginning, however, I must admit that it takes some time for us to get to the action. The film is promoted heavily as a kung-fu flick, but with the exception of a nice fight sequence early on, we are denied of much of the action to begin with. I am not sure whether it is the correct move, because the drama of the film doesn’t really hold that much water for me. It felt as if it is somewhat rushed, and while the acting is not all that bad, sometimes the words to explain the histories and background of each character becomes nothing more than just that: mere words. For example, when Yutang’s wife Yueru (Fan Bingbing) tries to coerce her ex-husband, she uses the emotional pull of her own daughter by revealing that it is actually his as well. It’s a pity, because the words does not captivate me as much, and even more so when you see how it gets on when everyone shuts up: the most impressive part of that sequence is when the policeman goes after her daughter, and he yearns to touch her, knowing that she is actually hers. Oh, it’s beautiful, I like it very much, and it is such showing, rather than telling, that grabs me. Of those whose background weren’t particularly shown (like the monk and beggar), I feel that someone somewhere missed a trick here.

Before I go on, I have to comment to two things that also took away from my enjoyment of the film. In fact, it didn’t merely detract, but it distracts. The director has a tendency to use some slow-motion during some of the right scenes. That’s not a bad thing in itself, but the said moments weren’t shot in slow motion (which would have been smooth). Rather, I suspect that they were alterations made in post-production, merely reducing the speed of the clip. Instead of being smooth, it jerks, and right in the middle of the action sequences, at times it slows the flow for me. That was mighty unpleasant, but not as unpleasant as the dubbing. Take for example when the beggar was talking about his past, and his search for peace. You can tell clearly that it was dubbed, because his lips did not quite match not only the words spoken, but also the little things like sighs and sobs. It is an emotional part, but unfortunatey the dubbing totally killed it for me. Perhaps I made a mistake, since I am not a native Chinese speaker or listener, but it felt totally wrong for me. That, however, is a reflection of my own personal preference, and is the main reason why I prefer films to be subtitled rather than dubbed.

These however, are minor complaints, and pale in comparison when Sun Yatsen finally arrives in Hong Kong. The stage is set, the music is pumping (some rock elements here too. Brilliant), and the action explodes. Oh wow, the fight scenes were impressive. I absolutely loved it, and how it’s controlled. We don’t get a big, messy free-for-all. Rather, each one of them is assigned different tasks, and as such they are introduced into the fight at different times. It allows for a wider variety, and so we see the rush through the streets, the personal one-on-one battles, the chasing throughout the city, and so forth. Some use brute strength, some use explosives, others use weapons like bows and arrows, while the rest defend themselves from these arrows using sacks of rice. Even the gun was brought into play, and has significant meaning: it is a Western import, and it reflects the influence that non-Chinese people has in Chinese affairs. It may have been simpler had the assassins all been armed with one (it was quite possible for them to use it), but it also reflects a greater integrity within them to not use. That is something I can respect.

In conclusion, I have to say that while the film seems to suffer from the minor details, the little things that I have already mentioned above, all in all it is an enjoyable film that builds and builds into a fantastic and frenetic last half-hour or so. It is this second half that the first is worth enduring for, even if you’re not into the dramas yourself. It succeeded in humanising the characters, though not all on the same level, but enough to give us some relation to the characters on screen. They’re not just the fallen, they’re portrayed as heroes of Chinese history, and so there is added value in each and every one of them, however small their role may be.

For all the good the movie does, though…it doesn’t help with dispelling the notion that all Chinese people know kung-fu. 🙂

The music bugged Fikri for a while, until he realised halfway that it sounded almost exactly the same as John Williams’s main ‘Munich’ score…