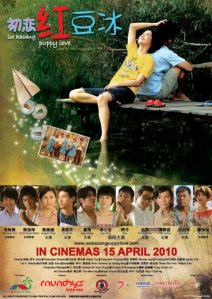 In Cinema Online’s review of ‘Ice Kacang Puppy Love’, they have a small segment whereby they compare the film to other, similar films. This is a way of capturing, in a nutshell, the spirit of the film, and allows you to decide, if you’re too busy or not bothered enough to read through the whole review, what the film is all about. Of course, this way you’re left at the mercy of the reviewer’s picks, which may or may not be accurate. Nevertheless, it is a nice little nugget that I don’t notice very much elsewhere, and it might be good to incorporate it here.

Getting back to the point, there are two films they selected. One is a film called ‘Hormones’, which, truth be told, I haven’t even heard of. Then again, a film dealing with one’s first love should never completely forget the chemical reactions at work, and in that light, a film called ‘Hormones’ seems apt, however obscure it may be. The other film selected was ‘(500) Days of Summer’. This is a film that I not only have heard of, but have also seen. It bills itself not as a love story, but as a story about love. I wondered what would be all that special about it, since everyone else was banging on about it. By the end of the film, I have made up my mind. Upon seeing the film’s title in Cinema Online’s review, I can only conclude that the reviewer himself or herself is a sadist.

That’s not to say that it’s a bad movie. In fact, it is a very good movie. It is so good that it inspired feelings within me that I don’t want inspired. That’s the problem with telling the story of first loves. For some people, it can be a sickly sweet recollection (the experience and the recollection of that experience can be two different things). For others, it is a path they don’t really want to walk down. For my part, I still recall good things about my own first love, as well as bad. Coincidentally, it was my ex who recommended me the film; after having seen it, I wonder whether there was something that she wanted to tell me . Don’t worry, we’re on good terms now. As a certain Mr Stinson once said, “We’re not breaking up, we’re just two friends getting back together.”

‘Ice Kacang Puppy Love’ is a film based on the childhood experiences of the director, Ah Niu. Botak (Ah Niu) works at his father’s coffee shop, and he is madly in love with Fighting Fish (Lee Sinje). Fish is a fighter indeed, a rough and ready girl whose willing to mix it with bullies such as Ma Li Fan (Gary Chaw), and has looks that could very well kill if the saying is true. However, Ma Li Fan’s sister, Ma Li Bing (Fish Leong), has a big crush on Botak (though it probably doesn’t help that she is mute, spending most, if not all of her time drinking barli ais). Botak has a sister of his own (Lim Ching Miau), who in turn is madly in love with the charcoal seller Prince Charming (Victor Wong). In truth, though their relationship can be described as antagonistic at times, they spend their time growing up together, and it is their mishaps and misadventures that the story follows.

And I have to say, if this is what it’s like, I wouldn’t mind growing up in a small town. The film is incredibly fun, and you can’t go a few minutes without something usually making you smile at least. For example, Ma Li Fan constantly challenges Fish at anything, from baling guli (is there an homage paid here to Yasmin Ahmad?) to fighting fish competitions. In case you were wondering, that’s where Fish’s nickname came from. She has a collection of fighting fishes. Inevitably, she would always come out on top, but it wouldn’t quite shut Ma Li Fan up. During their younger days, he would continuously taunt Fighting Fish about the fact that she has no father. That is something I got straight away from the dialogue: “Ni meiyo papa!”

That leads to another issue that the film takes a minor look at, that of familial relationships. Ma Li Fan’s taunts pinpointed a weakness in her armour, not unlike Marty McFly being called a chicken. Fish would spend long hours and days out at the jetty, with Botak as her companion, as she lets her guard down and speaks her mind about her parents: “One day, I’m going to go far away from here,” she said cryptically. For a moment, I thought she was talking about killing herself, and evidently, the look of worry that crossed Botak’s face suggested that he thought of the same thing. Nonetheless, he didn’t, and perhaps couldn’t, quite bring himself to say it. Maybe it is a parental thing, as his father is quite harsh on him at times. He struggles to make a cup of coffee the way that his father demanded him to. “The ingredients are all the same, but what’s missing?” he mused to himself. His older brother, on the other hand, can work that cup of coffee like magic, but is constantly unhappy with his father’s methods, which he considers to be old-fashioned and traditional. He longs to go to Kuala Lumpur, a bigger place where bigger dreams are supposed to be able to thrive. Thus, we see an element of migration at play here, the rural to urban (dis)location desired by many, as well as a willingness to move forward from what is perceived to be backwardness.

Nevertheless, while these are the elements that I see in this film, it doesn’t mean that they’re totally fleshed out to the point of distracting us from the bigger picture. You can read whatever you want into these, but ultimately the film is about Ah Niu and his unspoken love for Fighting Fish. Instead of truly letting his feelings out, he buries them deep down, expressing them only through the means of his paintings and drawings (which were actually quite good). In fact, for some of the shots in the film they transition smoothly into his own paintings, which made me wonder whether they were made before or during the production, and shot the scenes involving the paintings in the later days. It’s not such a surprise, for the cinematographer filmed the whole film as a nostalgic, picturesque recollection of the 1980s (which is when the film is set). Everything is so beautiful, and it makes me wonder whether Ah Niu doesn’t just want to reawaken within us a willingness to look back at our first loves, but also at the past that is our history. We are who we are and were, a reminder that where we came from is a key factor in the us today.

Speaking of which, Ah Niu may be the director, but he also plays the role of Botak with aplomb. I wanted to smack his face several times, but that’s only because of his timidity and shyness. It’s the kind that is maddening, that encourages you to scream at the screen, “Come on, you bugger! Give her the freakin’ letter already!” That such a desire exists proves that the film and his acting is effective. Acting and directing can be two very difficult things on their own, let alone combined. Lee Sinje is totally charming in her own way, playing the role with such spunk. Everybody else chips in with their worth, including Fish Leong. She’s a successful Malaysian singer in her own right, but I’ve not actually seen or heard of her own music. She does very well in China, mind, so much so that my cinematographer talks about her a lot. Unfortunately, at the time, he was referring to her using her Chinese name, of which I had no idea. He kept beating that drum, until another Malaysian friend of ours came along. Upon consultation, he finally got the ‘English’ name right: “Haiya!” I said to him in exasperation, “say that it’s Fish Leong lah! How would I know otherwise?” For those few minutes, he made me feel like a bad Malaysian.

In short, ‘Ice Kacang Puppy Love’ is a film that is not to be missed. Trawling through the websites in search of information about this film, I came across quite a number of comments that highlighted the local or Malaysian-Chinese elements of the film. I feel that it is unfair, because although this is a film that will definitely resonate to members of the local Chinese community, in the end it is a film that deserves to stand on its own two feet for what it is. It has beautiful sceneries, a great and effective cast (the old man who waits fifty years for his wife breaks my heart), melancholic music, and plenty of humour laced with drama.

It’s a film. A good film that deserves to be watched by all. Full stop.

Fikri can’t believe the movie’s not on IMDB. At least, not as ‘Ice Kacang Puppy Love’.