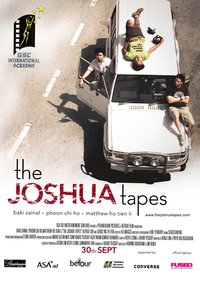 Fikri Jermadi takes a rare day off (of sorts) to catch a rare film (of sorts).

Disclaimer: Phoon Chi Ho (Ryan) is my junior at university. Therefore, much like the previous review of a junior of mine who made the leap unto the big screen in ‘Belukar’, there is no way that this particular review can be measured against any sort of objective standard. Then again, I suppose you could argue that throughout the journey of this particular site, the term ‘objective’ could rarely be used in the manner that it’s meant to in a film review. That doesn’t really mean that this is going to be a tribute or anything to Chi Ho, but still…disclaimer nonetheless.

I should also promote another disclaimer. Grace Ng (Sam) was also a junior of mine. The funny thing is, I don’t remember having ever met her. I have heard about her for many a time, and she seems like one of the pretty beautiful types that you shouldn’t really forget about. But I searched the banks of my memories, and I couldn’t recall having really hung out with her or anything of the sort. That’s another issue that hit me once I got out of the cinema: that it’s been five years since I left university, and so I probably shouldn’t be blamed for having such hazy memories.

It also served to remind me of how old I really am.

That’s not such a bad thing, in a way, because ‘The Joshua Tapes’ is a film that is made by and for the people of my generation. The story follows three friends, Ryan, Reza (Baki Zainal) and Ajeet (Matthew Ho), who take in a road trip to Terengganu. This was apparently at the suggestion of Joshua (Alfred Loh), who suggested that they take a road trip to Terengganu before he leaves. This is a fact revealed during one of the film’s flashbacks. It utilises the video camera as a sort of time machine, allowing us, the viewers, to not only be involved with the adventures of the three people on screen, but also to be aware of the important details that fills in the gap, making it a more complete experience. Some movies would just flashback and forth with reckless abandon, and so it is quite refreshing to see the video camera used as a tool for such an occasion.

Throughout the trip, then, their friendship inevitably come apart at the seams, being tested time and again as the claustrophobic space of the journey forces them to face up to certain realities. One of them involves Sam, Ryan’s ex-girlfriend, whose role here is more limited than I thought, but no less important.

I believe that claustrophobia is the key word here. In the first half of the film, the action pretty much followed the three friends as they set off on their journey. Admittedly, the budget probably doesn’t allow for an extra rig to allow the makers more options in terms of where they can place the camera. Nonetheless, I felt a huge mismatch between the information being presented and the style with which that information is presented. What I mean is that the camera is really, really close to the characters in the car, but they seem to talk about things that are not particularly dramatic to begin with. In fact, the film seems to be filled with a fair amount of small talk, the kind that actually makes things realistic here. “Maybe he’s pissed about the rising price in oil,” says Ryan, when Reza was somewhat harshly served with his food in a mamak stall. Mini statements such as these makes me thing that this not quite just a story about three friends, it is also a mini mirror of sorts of our times. Most films involve conversations that’s only related to the plot; here, you feel as if the characters are you or your friends; we always go off topic somewhere along the way, don’t we?

Just like the paragraph above, in fact. What I wanted to talk about was the camera, because it was very close to the characters. It doesn’t change, as I said, probably because of the lack of space. Therefore, you get a similar intensity through camera when Reza’s talking about how hungry he is to him forcing Ajeet to talk about his secrets. There probably is more space inside a Pajero if you want it to be, and a little variety in the shots and sizes of them would probably have helped to control the intimacy a little bit more. Having said that, perhaps there is a deliberate effort at work here, one that aims to create that feel of being too close to the characters.

It is only in the second half when a lot more of the action started to take place outside of the car, and the space that is granted to the characters is an absolute joy. I realise that that was what I felt in the car; the characters didn’t have space to grow. The story didn’t have much space to progress with either, but once the space was there, each and every one of them grew. I became more attracted to the story once they got outside, and they became more sincere, more honest with themselves, in a way. How honest? For fear of revealing more plot points than I really should, I probably won’t say too much, but you’ll really appreciate the characters and the story from the halfway point.

The final part was beautiful as well. It was also the quietest section of the film, in the sense that they didn’t really say anything. Is the silence and the beauty linked? It certainly is the most filmic part of the film, and the one that really makes me feel…nice. How to describe the way this film’s ending made me feel? I don’t know. How do you describe the rainbow after the rain and do it justice? I don’t know either. Answers on a postcard, please.

I will, however, say that I don’t like the colour. I don’t. It’s all grainy yellow, and in some parts it seemed so blown up and off that it hurts my eyes. I had to cover my eyes during one particular part of the film, not because of the gruesomeness of someone getting their head lobbed off or anything of the sort, but because I couldn’t stand the colour. It seemed very, very wrong, almost as if they were trying to cover for something in some of the scenes (the mismatch in colour temperatures? Were they trying to create a film feel to it? I don’t know, but it makes me feel like I’m watching a film dug out from a vault somewhere, and not a particularly well-preserved one). It makes me wonder whether I have been too conditioned to watch only a certain kind of movie, or whether it is my own filmmaking sensibilities that is at work here, but I do think that ‘The Joshua Tapes’ may well be the first film whose publicity photographs seems more attractive to me than the final film itself.

Don’t let that sway your decision, however, for ‘The Joshua Tapes’ is a fine movie that does indeed mirror aspects of our lives. There was a moment when Reza tells Ajeet that he is concerned about him, but Ajeet fires a volley that shut him up, berating him for only bothering to ask him now, but not before. “No phone calls, nothing!” Or something to that effect. It is indeed how I feel about certain people, but I can’t quite recall the exact quote at this moment in time. My memory must be hazier than I thought it to be.

Damn…I am getting old.

One thought on “Days of Our Lives – The Joshua Tapes”