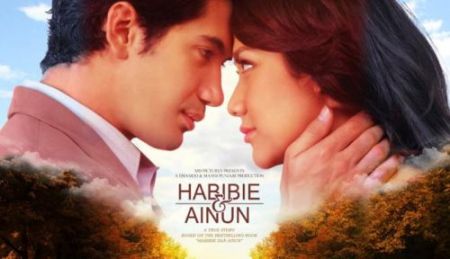 He stopped, turned, and looked at his wife. “17,000 islands…” he started, somewhat stammering his way through the emotions. “17,000 islands…this could have connected them all, but they didn’t believe in themselves, and now…” Habibie finally allowed the moment to get to him, his eyes already welled up.

Ainun, watching and listening, patiently as she did all these years, moved closer, withdrawing a handkerchief from her handbag. She gingerly held it, and used it to wipe her husband’s hands, by now sooted by the dust on the airplane he had built and touched.

The story of Habibie and Ainun is a unique one, in a way. He was the third president of Indonesia, and she is his wife. In the film, portrayed by Reza Rahardian and Bunga Citra Lestari respectively, we take a closer look at their love story. They met when they were a lot younger, a part of the same school, but while initial attractions may simmer, it did not truly boil over until a few years later.

By now, Habibie is already in Germany, studying aeronautical engineering, while Ainun is back in Bandung waiting to be betrothed to the right person by her father. Habibie, though, was afflicted with an illness, an illness that required him to be brought back to Indonesia to rest, before continuing with the rest of his studies. It is a blessing in disguise, for one day, in accompanying his brother to deliver some items to Ainun’s house, they finally meet each other.

This was a beautiful scene. Imagine, if you will, a house full designed with all the paraphernalia of 1960s Bandung. I am not expert in such a field, but it suffices for me to say that the stage was set for a great love story to flourish. Habibie hears the sounds of a sewing machine being worked, and then he turned the corner, past the wall, and saw… “Ainun?”

She turns, looks at him, and smiles coyly. And so it begins, as they face plenty of trials and tribulations along the way.

As a film, I find it interesting that it was initially based on a book. I’m sure that as with any adaptation, a complete translation is probably not what the doctor ordered, but to have a film focus almost completely on the love story of a former president is, in my opinion, somewhat unprecedented, and especially for films in and around the region. Film texts based on the lives of fairly significant historical figures tend to look at their professional achievements, the kind that makes a huge impact on society as a whole.

What of the more personal nature, however? The micro that is the family and the wife and the children? Such areas are not as commonly looked at, and this, in this respect, makes ‘Habibie & Ainun’ a unique film to begin with. We see, for example, the personal sacrifices that Ainun made as Habibie continued on with his education. She spent time at home raising the kids, while Habibie is out there, proving the Germans wrong about the capabilities of foreigners, and more specifically Indonesians, in getting things done.

His advances in this field would prove to be monumental enough to be brought back personally by President Soeharto (Tio Pakusadewo), in performance recognised only by those closest to him, for you hardly see the big man. Habibie continued with his advances in the field of aero engineering, to the point that he was ready to launch a plane built entirely by Indonesians, the N-250. Here, a mixture of reenacted sequences and news footages was cleverly weaved into the story, and it was done fairly seamlessly. Similarly, scenes of the riots in 1997 was also worked into the narrative, and it lends an air of seriousness to the proceedings.

This is somewhat important, because it is helpful in framing the kind of character B.J. Habibie is. They showcase him as a fine, upstanding citizen who loves his country and is so whiter than white he could have starred in a Persil advert. There were temptations along the way, such as money and women, and while they are somewhat comically dealt with at times, it helps to remind us that it is not all smooth and plain sailing for the couple and their family.

This was also another example of great cinematic storytelling. Prior to that, his mother, R.A. Tuti Marini Puspowardojo (Ratna Riantiarno), was advising the couple at the dinner table about the unscrupulous characters they may come across sooner or later in life. It was a three-shot, encapsulating both Habibie and Ainun. Following the scene where Habibie resisted the advances of the opposite sex, we return to the dinner table, where there are only Habibie and Ainun, sitting down and talking about the issue, but the framing is strikingly similar to the earlier three-shot, even though the seat is now empty. It visually indicates not only her moving on and out of the story, but also her lingering presence. I don’t know whether it is accidental or otherwise, and perhaps I am reading too much into nothing, but this nothing is makes me feel like there is something to be considered here.

Alas, more often than not the filmmaker, Faozan Rizal, would fall back into the tropes of sinetron dramas. The producers themselves, Dhamoo and Manoj Punjabi, are well known for the production of such dramas, and perhaps there is a lingering afterthought of these conventions that seeped through into the film every once in a while. Fortunately, these are not as obvious as the zoom-zoom-zoom variety, but it does interfere with the cinematic work being done.

Also, the propagandistic approach being taken can also grate at times. Habibie is portrayed as someone who is practically flying the flag for Indonesia, a politician so morally virtuous and an engineer so clever that he proved the Germans wrong at their own game. It is not something that is wrong or entirely inaccurate, but the ways in which these ideals are portrayed can border on outright jingoism at times, which also made me feel that the film is less than what it could possibly be.

It is not a perfect film, but it told a great story in a very touching way. I watched this in the cinema with my wife, and my shoulders were wet with her tears at important points in the story. I have since bought the DVD, and watched it a further three ties, both in class and in private, and I am yet to be bored of it.

I guess that says it all, really.

Since writing this review, Fikri has seen the film one more time.