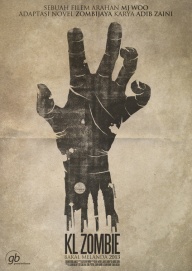 ‘KL Zombi’ is a film directed by Woo Ming Jin, who goes by the moniker of MJ Woo for this film. Is this his brand for more mainstream films? He is also credited as the originator of the idea of the novel ‘Zombijaya’, from which the film is adapted. Again, he was credited as MJ Woo there. Perhaps there is a certain effort from his part to create a separate brand and identity from his more independent filmmaking efforts.

In all honesty, this film should be seen more as a Zizak Razak film than anything else. Bear that in mind as you enter the cinema hall, and you’ll have a far more matching experience.

Of course, at the start of the film, I found myself reaching for the movie ticket again, just to make sure I had entered the right cinema. This was because the movie started with an infomercial of sorts for Broway, a product line from an enterprising businessman, Bro Khalid (Usop Wilca). We then join the main cast of the film: Nipis (Zizan Razak), Sofea (Faezah Elai), Kamarul (Iedil Putra), Ana (Izara Aishah) and Aliff (Zain Hamid). They’re just chilling at a spot, quite possibly Lookout Point at Ampang or somewhere similar, when Aliff gets bitten by a dog. Unfortunately, this is no normal dog, and so Aliff turns into a zombie. However, the turn does not happen immediately, and so everyone goes home that night fairly happy (except for Kamarul, whose girlfriend Ana had to send Aliff to the clinic, along the way of which they happen to…do stuff), only to have their world turned upside down the very next day, as one by one, more and more people in Kuala Lumpur becomes infected from this and becomes…zombies! The protagonist of the film is Nipis, and it is up to him and his (uninfected) friends to try and save KL, Malaysia and quite possibly the world from becoming the walking (un)dead.

I must admit that there is a large part of me that is not quite sure of what to make of this film. It is a comedy, yes, and it plays up very much to the target audience of the film. However, I feel like I am right on the borderline of deciding whether this film is working as a straight-up genre comedy or a parody (or maybe even both). One of the clues lies in the portrayal of Sofea, acted in a very exaggerated and over-the-top manner. There are also similar elements that shows excited some people get at the possibility of driving German marquee cars as a marker of success. Poking fun at society? We’ll get to that in a short while, but the point remains that I don’t exactly know what to make of the movie. Perhaps it is my personal bias for Ming Jin that is pushing me in the direction of “this movie is a very smart parody that mocks elements of Malaysian society.”

This film follows hot on the heels of ‘Pecah’, yet another adaptation of a book by FIXI. They’ve established a strong brand for themselves, but carrying on the thread of thought from the opening paragraph, what we basically have here is Ming Jin adapting from his own idea. Not something that happens everyday, but it is a key note to remember when we compare the film to the book; there are indeed differences between both versions, but the intent, I am sure, remains pretty much the same, if not identical. I haven’t read the book myself, but I’m told that the difference in settings, as well as the endings, makes for an indifferent experience for some. Hmm.

For my part, I enjoyed the movie enough to laugh where (I think) I am supposed to laugh. Many of the jokes are, unfortunately, inaccessible to those who does not quite get the genre of Malay/sian comedies. In this case, while I do not profess a deep knowledge or experience of the genre myself, I am happy that I know enough to enjoy the film. Those who may have paid closer attention to films such as ‘Sherlock Holmes’, in addition to the more conventional zombie flicks such as ‘Zombieland’ and ‘Shaun of the Dead’, would appreciate the minor touches that reflects influences from those films.

I especially like the idea of the zombies themselves. In many cases, the turn is not quite as dramatic and immediate as in many other films, notably ‘World War Z’. For ‘KL Zombi’, what we get is a slow transition that allows us to not only see the difference, but also to appreciate the humour. Consider the change that the school teacher Ana goes through; she wolfs down a mountainous amount of rice during lunch, as her colleagues look on in horror. She even helps herself to a few scoops from their plates, to which they react with disdain. The dealing of social issues and boundaries in comedy have always been a bit more acceptable than in many other genres, and in this case, we see the little ways in which the private and personal space is (in)voluntarily invaded.

Once they turn, then we see the social commentary (maybe?) that lies behind the humour as well. Zizan stops at a mamak stall at some point in the film. By now, many people have turned into zombies, but he is still somewhat oblivious to the change at hand. He remains similarly oblivious to the zombie mamak making teh tarik continuously without any pause, but I find the idea of a zombie mamak doing the same things over and over again absolutely hilarious. I wrote about how the way some things have been structured in the service industry have helped to drive out a certain sense of humanity in us. In this film, we see a very graphic and humourous visualisation of that idea. We get a bit more of that later on as well, with a zombie teacher continuing to teach a class of zombie students, who are still seated in their places, even though they have become zombies. That completely tickled my funny and intellectual bone, so top marks from me there.

It is, however, not quite the perfect movie. Beyond the cultural and linguistic barrier which may bar some of us from truly understanding the film, the film also has some points in the plot I’m not entirely satisfied with. We don’t quite see a complete beginning and ending of the entire zombie problem. We are merely told that the dog (which pretty much started the whole thing) was somewhat at fault, but I think a more complete rendition would have seen the whole problem dealt with at its source, and not just their canine causes.

The same point applies to Nipis himself. He was presented as someone who is fairly unreliable, with a strong laissez-faire attitude with…well, pretty much everything. However, the shift in character from him was quite sudden and surprising. Upon (finally!) realising that things have really gone belly up for the whole of KL, he returns home, traumatised by the experience. He goes into the shower, weeps, and then…sees his hockey shirt hung on the wall, along with the hockey sticks. In the next sequence of shots, he changes not only his outfit, but attitude as well, becoming a kind of superhero determined to overcome the problem. There was little that showed this particular change. Why did his attitude change? We only saw him play hockey for a bit prior to this, and while he was presented as a fairly good player, it was also played with other players who had become zombies by now, so we don’t really know how good he really is. He leaves on his bike (a surreal sequence of him doing stunts on his bike was also quite interesting), and for a moment I don’t really know where he is going. Of course, he’s searching for his friends, but again, there’s nothing to truly indicate this sudden motivation. Perhaps it is not really that big of an issue, but an indication of why he has changed his attitude and who he is changing for would make for a more complete experience, in my opinion.

Additionally, the some of the other characters in the film also appear to be superficially added in (I thought the school bus driver would have become a more major character, but we don’t really see him play as major a role after his quick thinking and kick-ass life-saving actions). Then again, I did mention at the start of this particular write-up about how this would be more accurately seen as a Zizan Razak film more than anything else. He might be a bit of a loser at the start of the film, but he is still the main lead, and it is this that we should use as a guide in our appreciation of the film.

Fikri went and got straight to a place that sells kuay teow basah after the film.