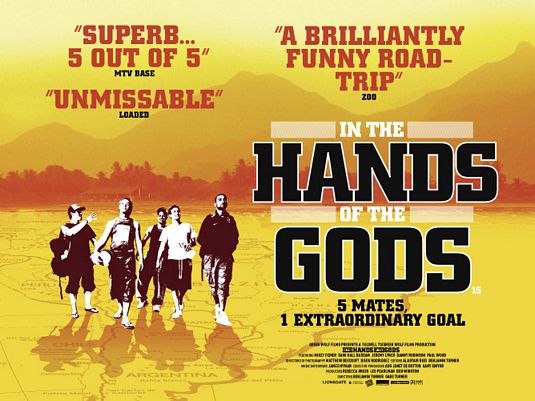 Fikri Jermadi came across this documentary by accident, but was glad he did.

Diego Maradona is an enigmatic figure, even at the worst of times. His genius on the football pitch may not be in question, but it is off the pitch that he seems to grow in legend and stature. Unable to keep quiet even until now (especially when Pele, his eternal enemy, has had his say), some of his soundbites are instantly quotable, so no matter how ridiculous he may sound at times, it makes him even more endearing that most. A podcast I listen to, The Football Ramble, even has a special ‘corner’ dedicated to him, and sometimes they visit that corner a bit more often than they initially thought. Love him or hate him, you can’t ignore him.

To five young men from England, he is even more than that. He is an idol, someone who has helped to light the way when there is nothing but darkness. These five men (Sami Hall, Danny Robinson, Paul Wood, Jeremy Lynch and Mikey Fisher), all freestyle footballers, then had a brilliant idea (at least to them): they want to busk their way from home to Argentina, using their football skills they attained inspired by him to meet the great man himself.

From the off, you might think that such an endeavour is not likely to succeed. After all, busking in itself is already quite competitive to begin with. Take a walk around London, especially the more touristy areas, and see the number of acts wheeling and dealing their way for more of the Queen’s coins. What would freestyle footballers, whose appeal may well be limited to begin with, be able to offer to the general public? More to the point, will they actually be able to make enough money to even leave the island?

Initially I had wondered about the authenticity of ‘In The Hands of the Gods’. Given that it’s a feature-length production, it is safe to assume that they boys at least manage to make some ways into their journey. The filmmakers, Benjamin and Gabe Turner, weren’t from the same group, but independent observers who maintained their distance during the production. In fact, this documentary was made by the same people who also led the production of ‘Class of 92’. A bit of Googling turned up ‘Life of Ryan: Caretaker Manager’, which chronicles Ryan Giggs’s experience in helming Manchester United for the last few games of last season.

That documentary was a slick and high-class production with all the bells and whistles tuned. This, however, is a lot more lo-fi, but conversely, it helps to portray the desperate grittiness of the situations the boys manage to find themselves in. Having blagged their way across the Atlantic to the United States, they started working their way down the American continent. Their unique appeal over there is obvious; though football/soccer has grown exponentially over the years, even at the time of the production things like this remains a novelty act. Truth be told, I always find myself drawn towards those who can make magic with a ball in any shape and form. Knowing how hard it is to even attain a modicum of skill level in the game, I am able to appreciate the expression of their skill here.

It is the content of their character, though, that drives the documentary. Any thought of this being an improbably journey to begin with dissipates rather quickly by the seriousness with which this is undertaken. They may be young boys, but their latent intent in meeting with their idol serves as a powerful motivator for them to push and push even more, reaching new heights. It ebbs and flows, much like their confidence when a night’s takings are not quite what they manage to expect, but all the same, even the basic expression of their enthusiasm and diligence has turned me into a fan.

At that point, I realise anyone watching this film cannot lose. Strip away all the fancy stylings, and this film retains a similarly strong adherence towards classic forms of storytelling methods. Quite simply: there is an objective, and there is the obstacle. The objective is fantastic, and so is the obstacle, but the bright spark these boys brought to the table renders that slightly more achievable, bit by bit. It is this form of credibility that hooked me in. From a more cynical point of view, I have traversed to a more supportive position, driven by the one and simple question: can they do it?

Boys being boys, along the way they squabble and fight. Again, I initially thought that some of this was staged for the camera, but then something serious happened that, once again, proved me wrong. I am quite glad, because this bit of drama helps to heighten the tension amongst the group in a constructive enough manner. For them, how can they harness this situation to help them keep their eyes on the prize? For us, the importance of even a simple meet and greet with their idol is driven home even more.

All in all, this was a documentary that has turned me from my original position to one more in favour of the film. What was an improbably idea to begin with grows ever more real by the day, and in watching this film, I am further encouraged by how the simple act of trying means that we cannot fail. Life has its own narratives in store for us, but not trying means that we don’t even have a chance of winning, for even when we fail, we fail gloriously.

Keep the camera rolling, and who knows? You may even have an award-winning film on your hands.

Fikri is still reeling from the destruction of Brazil by the Germans.