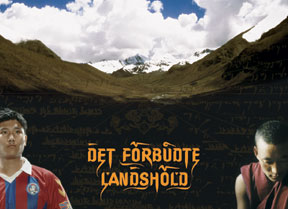 Fikri Jermadi wonders how possible it is to talk about Tibet without being political, even in a film review.

How pervasive is politics in our life?

I considered that question greatly in watching ‘The Forbidden Team’. It is a documentary that follows the attempt by Tibet to field a team against Greenland in Denmark. Their journey is rife with political and practical obstacles, but this documentary is as much about the attempted emancipation of a segment of the Tibetan population as it is about the staging of an international football match.

Directed by the Danish duo Rasmus Dinesen and Arnold Krojgaard, we delve straight into the heart of the matter. The story on screen is led by their team manager, Karma Ngodup. On the surface, he plays his role, and we see him working earnestly to secure the right documentation, allowing his players to play in Denmark.

Below that, though, bubbles a strong, political personality that is waiting to stick two fingers up to the Chinese. He speaks forcefully of the right of Tibetans everywhere to rock up and play football to their heart’s content. Of course, that is absolutely right, but you can’t help but notice the anger that seeps through his veneer at the worst of times. In one scene, he speaks sternly about the need to represent Tibet to the best of their traditions and culture when they do arrive overseas.

Ostensibly, then, this movie is about football. Then again, football is usually an extension of its context’s politics, in which case this should really be no different than the analysis of South American or Asian football, for example. However, there is a crucial distinction I wish to make, and for now, I want you to bear with me.

It’s possible to talk about football, and not consider the political aspect or implications, and vice versa. The same applies to the stakeholders in that football team. When it comes to Tibet, though, I feel like it is completely impossible to discuss about anything without being dragged into the politics of it all. This meant that this has been a decent reminder of some rather aggressive conversations I had in the past.

It reminded me of a friend I have, who I love and respect very much. If, however, there is one thing I wanted to avoid talking to him about, it is his homeland, Tibet. It is not that I do not support his cause, it’s just that he won’t stop once he starts. It becomes more than a little suffocating sometimes, so I’ve learned to pick my moments with him. It can be quite funny, though; I remember one dinner when we all had a good laugh about the number of girls he had slept with simply because they were sympathetic to the Tibetan cause. “American, Japanese, Dutch, British, Korean, French…” he counted them off one by one on his fingers as we giggled about the place; I believe the number is closer to seventeen.

So, gentlemen. If you want to get laid, being a Tibetan is not a bad way to go about it.

Anyways, back to the documentary. There is no chance of any of the players cavorting about the place, but the heavy sense of politics remains all the same. Each setback that crops up is laced with that feeling. It becomes the strong unspoken, though there are a number of times when Karma bites back: “If any Chinese can go anywhere and play football, why shouldn’t Tibetans?” It is a fair point.

And it is not to say that they can’t play well. Though I initially laughed at the fact they chose the shirt of Barcelona for the trials (“A bit far-fetched,” I thought to myself), there’s quite a number of them who can put together some moves. Put it this way: they are far from being the worst teams on the planet. That will be coming up in the next review, but for now, rest assured that they are not the worst players I’ve ever seen. Their professional attitude shines through, and that is a good thing.

Pieced together over a number of intensive but brief sessions, diplomatic issues meant that not all of their best players are even allowed to make the trip. One made a tearful confession in front of the camera, pouring his heart and soul out as his shoulders shook with great regret. It is these human moments, so difficult to actually capture on film, that manages to make this documentary slightly cheerier. I know that sounds weird, but look at it as a human counter-programming of the political content, and I hope that makes a lot more sense.

For at the heart of the matter is a human issue: the right of people to move about and play football. Yes, the political context should never be discouraged, but for many of the footballers on the team, there is little more than the ambition to just play football and see more of the world. Representing Tibet is also a grand dream for many, but even then, I suspect it remains as much a nationalistic ideal as it is a political one i.e. pro-Tibet instead of anti-China.

A monk, briefly interviewed in the film, offered this great little insight, comparing Buddhism to football. He talked about how in football there is a need for control, which is not unlike Buddhism. Similarly, success depends on the arrangement of a number of different elements, and their coordination to come together at the same time. Playing football, then, is not unlike, and perhaps is even the same as the search for peace in life. You can’t get any deeper than that.

You may find that the issues I talked about above are difficult to truly separate from the other. In essence, perhaps that is an indication of how we are all truly connected to one another, united by the simple idea of games and football.

We, and the cows that roam the fields they use for practice in Dharamsala. Cows are revered in that part of the world, so that is a sight for sore eyes.

Fikri once saw his Tibetan friend’s penis. He was not entirely surprised.