Adi Iskandar considers the politics behind sassy girls and sex.

The journey this site undertakes in better understanding Korean films continues with ‘My Love, My Bride’. As you can probably guess from the title, it continues the fine tradition of not doing things by halves, and connections can be thought of to other sickly sweet love stories.

It essentially tells the story of a couple who just got married, and the opening scene is highly indicative of how the story and the main couple’s relationship may turn out. To put it simply, they bicker with one another, despite the fact that the young man, Young Min (Jo Jung-suk) had arrived with noble intentions: to propose to his girlfriend, Mi-young (Shin Min-ah). Of course, a brief montage to cover up the fact that the film had no budget to film grand wedding scenes transitions us nicely into the early days of their relationship, where it seems almost every exchange ends with Young Min getting ready to pull of his pants at the slightest possibility of sex. 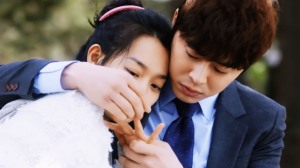 Even in that regard, though presented as a light affair, we can see how sex and sexuality, tied up with performances of gender, is to be a main point of the story. What’s interesting is that even when this is clearly the main focus, the couple flits back and forth between being forthright about sex and being shy about it in public; their conversations with their elderly landlord who lives downstairs, Madam (Ra Mi-ran) showcases this. She was incredibly explicit in her teasing of them, but whenever that was the case, both Mi-young and Young-min revert to the shy type. In front of a representative of complex society, the couple behave as expected, with sex not exactly meant to be coffee table talk with members of other generations. The performance, more than the reality, is incredibly important here.

Intragenerationally (if that is a word I am permitted to use here), the case could be seen between Young-min and his friends. Meeting up with them is akin to being let off the leash, but instead of attempting to seek solace and advice for the troubling phases of marriage he finds himself in, instead he attempts to portray himself as not being under Mi-young’s thumb. The wife here is seen as a perceived threat to his masculinity, an ideal that must be restored at all cost. It necessitated an impromptu invitation for everyone to visit his home, and Mi-young was given very little notice to prepare. Prepare she must, though, for that’s what a good wife does, right?

It doesn’t help that amongst Young-min’s friend is Seung-hee (Yoon Jung-hee), an attractive woman who is not only considered as being professionally successful (juxtaposed with Mi-young’s profession as a substitute arts teacher), but also personally sexy. More importantly, she can also hold her own in drinking competition, which doesn’t help to defuse things in any shape or form. This intensity is therefore derived not only from the affirmation of certain stereotypes and gender roles, but also from the transgressing of traditional boundaries itself.

That particular scene ends with all his friends leaving the house after a night of heavy drinking and eating. As they were about to leave, they were also aware of the potential discomfort caused to Mi-young; one of them, with all the wisdom of his years, pulled Young-min aside and told him that his couch is his to crash on should things come to a head. This exchange makes me think that as much as we can write about such representations in a critical fashion, there is a part of me that thinks the director, Lim Chan-sang (who made the witty ‘The President’s Barber’ over a decade ago), is not entirely unaware of the (hyper) sexual politics at play here.

Going beyond sexuality, there were a lot of other things presented in a hyper manner as well. Economically speaking, both characters were also made aware of how they must pinch won at certain times. When Young-min thinks that Mi-young is tempted by other men, a part of his logic looks at himself and considers his government job as being relatively unattractive. As such, though this film is presented as little more than the throwaway romantic comedy one is likely to come across on a regular basis, it does not mean that there is little reflections of society worth thinking about on a more critical level. Connections could also be made to other sickly sweet love stories, ranging from ‘My Sassy Girl’ to ‘Seducing Mr Perfect’ and more.

It falls at times into the tropes of such generic comedies, but for fans of Shin Min-a and the other lead actors, it’s another chance to see yet another hyper fantasy be played out on the silver screen. Going beyond films, consider programmes such as ‘We Got Married’ where Korean celebrities live their lives as if they’re married, and this film is an extension of both that programme and culture to a certain extent.

Adi still hums to ‘I Believe’ every once in a while.