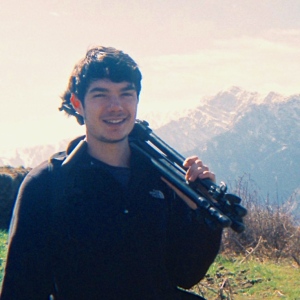 Ross Harrison is a documentary director from England. He has made a number of important short documentaries detailing stories untold from all over the world. Intriguingly, a number of them have been set close to home, with ‘Sunset Over Selungo’ putting the spotlight on the Penan people fighting for their homes in Sarawak. We got in touch with him for an exclusive interview, and he has kindly agreed to it. Enjoy!

I first came across your work ‘Sunset Over Selungo’, a documentary detailing the lives of aboriginals fighting to preserve their livelihoods in Sarawak. What inspired you to document this story?
I first heard about the Penan people while I was at university. Some quick research told me, in essence, that they are a tribe from Malaysian Borneo who live in one of the last untouched pockets of one of the oldest and most biodiverse rainforests in the world have been fighting to protect it for three decades. I think any filmmaker would be inspired to go and find out more!

What was the spark for this light?
In fact, I’ve been concerned for a long time by what’s happening to the world’s rainforests. They’re wonderful ecosystems and so full of mystery, and as we’re repeatedly told, these habitats are being demolished at a staggering rate for timber and to clear land for agriculture. In the state of Sarawak where the Penan live, 90% of the rainforests have been heavily impacted by logging or completely destroyed.

However, the general awareness of this destruction is only skin-deep and isn’t matched by a collective determination to act. I’m curious about how to tip the balance to that second part of that equation.

Added to this, I spent time studying the land rights issues faced by indigenous peoples. Across the world communities are forced off their ancestral lands by states or companies that are granted land tenure. When I discovered the Penan’s initiative to establish a Penan Peace Park, a protected area for the benefit of the community and biodiversity conservation, I thought it was a valuable, inspiring story to try and help share with others.

Does it help to explain why there are two different versions of your documentary?
I made a shorter version to appeal to people who maybe wouldn’t have enjoyed the pace and style of the longer cut. My hope is that ultimately more people will discover the story with two versions.

I think it’s clear that you have a deep passion for environmental issues. How closely related is this to your filmmaking? For example, is it something that you consciously develop through your films?
Absolutely. Although the idea of environmentalism being in its own box separated from other issues is something I find troubling. I think getting to the root of some of the ‘big problems’ has to be about looking at how all sorts of related systems interact: natural, commercial, digital, and psychological, amongst others.

That story is only the latest in an interesting pattern of documentaries, where you’ve looked at issues in developing countries from the perspective of the less privileged. How did this come about?
The enormous inequality between people’s life experiences and opportunities that’s determined by what part of the world they’re born in is something I find hard to accept. It’s my hope that sharing stories from people whose perspectives rarely get a wide audience can help be a catalyst for change. The reason my films have focused on developing countries is partly my prior interest and concern, plus partly knock-on effects of earlier projects leading to new contacts and stories.

I take it that’s how ‘Sophea’s Dream’ came about as well…
‘Sophea’s Dream’ is a portrait of one Cambodian girl who lives in the capital Phnom Penh and was made working with AusCam Freedom Project. They’re a charity that provides education scholarships to girls from families in poverty that might otherwise struggle to send their children to school. I was approached by AusCam to help tell Sophea’s story and offer an insight into the challenges and dangers she and other girls like her face. There is a widespread and vicious sex industry in Cambodia, which draws in girls from disadvantaged backgrounds. Many are also trafficked against their will.

Ensuring girls and boys from poor backgrounds get a full education is key to opening up opportunities and transforming the social and economic fabric of the country.

What kind of challenges did you face in making this film?
For me, the biggest challenge is not normally the logistics or the practical process, but thinking through how best to tell the story with nuance and respect. It is of course tough not being able to communicate directly. I don’t speak Khmer and Sophea’s English was still improving, but fortunately one of AusCam’s staff was a great interpreter. Sophea and her family were very welcoming the whole time, and Sophea was patient with me leaning out of a tuk-tuk with a camera, getting in the way of her bike.

What I noticed is that many of your films feature specific protagonists. How deliberate is this, and why?
So far it has been a conscious decision quite early on in the planning. I’ve found having a central individual or a few people gives a film an emotional grounding; they offer a backbone to a story, a personality that the audience can build a relationship with.

How did you get into filmmaking? Was there a specific moment that crystalised this particular desire?
It started as a hobby with my parents old Hi8 camera and carried on from there!

What kind of films did you watch growing up? Did any of them make a strong impression on you?
In my early teens I watched a lot of nature documentaries, in particular the jaw-dropping natural history series from the BBC here in the United Kingdom, such as ‘Planet Earth’, ‘Life in the Undergrowth’ and others. Watching those added to my interest in wildlife, for sure.

What is it about documentaries, though? Is there a particular characteristic that drew you to this genre?
To tell you the truth, my earliest dreams of filmmaking were about narrative films, but pretty early on I realised I could pick up a camcorder by myself and make a documentary. You can be a one-man crew making documentaries, so that allowed me to get started. Since then I’ve become more and more fascinated by the medium of video because there are so many possibilities to explore.

Generally speaking, what do you think about the state of documentary films? My impression is that it’s becoming even more popularly accepted by the mass audience.
There’s quite a lot of talk about this being a ‘golden age’ for documentaries and it seems like it to me. I take it as evidence that most people are curious about the world around them and that there’s a massive appetite for untold stories and insights into other cultures.

The rise is also of course driven by the democratisation of filmmaking with new technologies since the nineties. The mass audience is twinned with mass production which presents a challenge: those of us with internet access are overloaded with videos online these days, so filmmakers have to keep people’s attention and innovate with the way films are made.

Of course, the approaches to the different genres couldn’t be more different themselves. On any given project, do you have an idea that you develop in your mind to begin with, or do you shoot everything before letting the narrative reveal itself?
For most of the films I’ve worked on so far, there’s been a need to plan some basic sections of a narrative before shooting. That’s either because I’ve been piecing together footage for a story that I already know is there, or because of time constraints. I’d equally like to find a subject where there’s a seed of potential and a story unfolding and just document as an ongoing observer.

Speaking of which, how close do you get to the subject matter? I imagine a greater familiarity would help to tell the story more effectively, but does it get in the way of objectivity? Which do you prefer to prioritise?
It’s a constant tension. You have to build up a relationship, it’s unavoidable. If the situation requires working day after day with someone, training a camera on them and being in their home, you need to develop trust. I like to try and get to know people I make films about, then try to be disciplined and aware of how that may affect the film I’m making.

The film you’re making is, in a form, historicising events as they happen. How much of a factor is this in your equation? Does it mean you’re even more tempted to capture everything on tape, for example?
Yes, that’s something I do think about. There’s no truly objective way of recording events, but there is a spectrum and different subjects need different approaches. There are different ways to tell one story, and so there are different ways events get recorded into history, whether that in films or books or memories. The more you record, the more you can postpone decisions about how to tell a story until later on when you’re editing.

What is ’10shorts’ all about?
’10 shorts’ is a project I started to explore new stories and styles in a way that allowed me to move from one to the next quite quickly. It also gave me a target to keep me working. There are already 8 online, with the final 2 coming soon. The films are between 3 and 8 minutes and cover anything that’s taken my interest, from a special Nepalese yogurt to English folk dancing to my grandfather’s childhood memories.

Is there a plan to compile it as a feature presentation of sorts?
Well that hadn’t crossed my mind! I think it might turn out a bit too crazy, but could be an interesting challenge.

You’ve shot in countries like Nepal, Cambodia, Malaysia, India, Sri Lanka and Tanzania, among others. Which other countries would you like to shoot in and why?
South American countries are high on my list. Brazil, Peru, Ecuador and Bolivia because I am fascinated by the active social movements there and of course the Amazon.

Shooting in all these different locations, how collaborative does it get? I suppose everyone would like to work with people they know very well, but it can’t be easy keeping the same crew members for every project. How much do you rely on the native filmmaking networks?
Sadly, I haven’t yet collaborated with foreign filmmakers, but I would certainly like to in the future. All the projects mentioned here I’ve filmed and edited, and then others have helped with production logistics and translation.

On the other side of the lens, do these varieties affect how you see your target audience, if there is one? Is it the local population of, say, Malaysia, who could have a more direct impact in affecting change for the people of Selungo, or do you consciously aim for a more international audience?
Online distribution is a blessing and a curse because you can aim for an audience of everyone, but if you don’t target some groups, you might not reach anyone. For ‘Selungo’, my primary intended audience was international because that’s where I knew I would have the contacts and resources to operate and promote most effectively. That said, it has been screened in various places in Malaysia and received a lot of support there, which is great to know.

Before we wrap things up, what’s the best advice you have received about filmmaking?
Two very successful filmmakers I’ve met in the past gave me their advice on documentary filmmaking:

What’s next for you?
Number 2.

You can find out more about Ross at his website. ‘Sunset Over Selungo’ was screened at the 2014 Kuala Lumpur Eco Film Festival; we interviewed its organiser Yasmin Rashid here. Images provided by Ross Harrison.