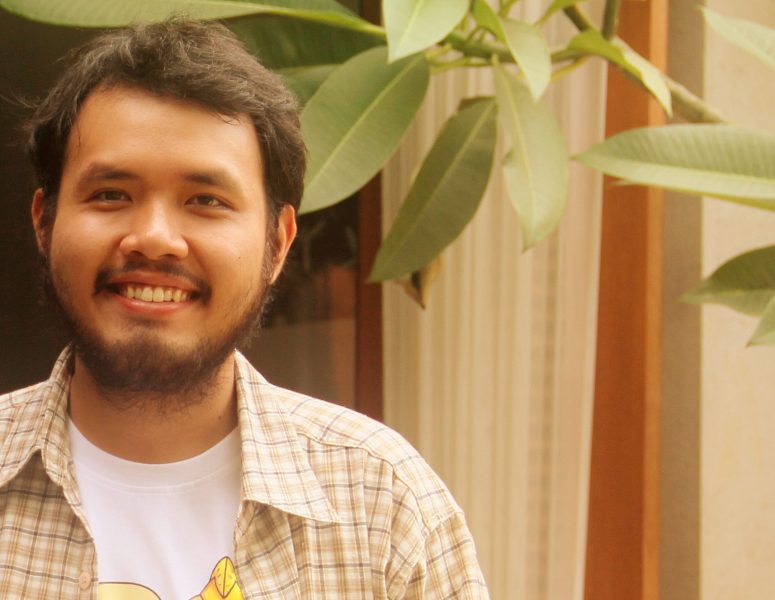 At an event in Monash College Jakarta, Winaldo Swastia speaks out on his career, the filmmaking process and Indonesian films as a whole.

Hi Winaldo! We’ve just watched your short films, Akhir! and Angin. Talk to us a bit about them.
Akhir! was my friend’s assignment. I had four friends who wanted to make a film, and they asked me to direct it, so I did. The second film, Angin, was my final project at Jakarta Institute of Arts (IKJ). It consisted of four team members: myself, the producer, the scriptwriter and the sound designer. Angin was nominated for the Best Short Film award at the 2010 Indonesian Film Festival. It was my free ticket to Singapore and India.

Was the story inspired by something specific?
Actually, I don’t remember! I forgot whether there was any particular incident that sparked this. When we made it, I wanted to make it by myself with a few friends of mine. The final project ballooned to include 45 people. I invited others to join me, at least on a financial level. It cost 45 million rupiah to make this, so I asked three others to join me.

At first, I wrote a synopsis and gave it to my scriptwriter. In the process of developing the story, he started to hesitate about the narrative. Then he proposed another synopsis, which I spontaneously agreed to, as it was better than the original.

If you see, both films have different styles. Akhir! was very harsh and violent. Angin, on the other hand, was very peaceful and smooth.

In between the peace, though, wasn’t there a sense of suffering?
The interesting thing about filmmaking is when spectators read films in a way different from what was intended. Yes, that’s a good way of looking at it. It was an interesting point I never thought of.

Right now you’re working on something with Garin Nugroho.
Yes, I am currently assisting him on something. The last film I worked on with him was Aach… Aku Jatuh Cinta! This will be screened in February 2016. It stars Pevita Pearce and Chico Jericho. One thing about this film was its premiere was scheduled for October, but it was postponed because the film was accepted for the Busan International Film Festival. It is the biggest film festival in Asia, and Mas Garin asked me to come to South Korea as well. It was a pleasure; after all, it was another free ticket!

You’ve worked extensively as an assistant director in Indonesia. Financially, how rewarding is it?
People usually think that the film industry in Indonesia is not financially good. Actually, it’s the opposite. What’s the standard salary for any white collar worker? It’s not more than 10 million rupiah, perhaps. As an assistant director, my income starts from 15 million rupiah a month, not including other bonuses or covered expenses. As time goes by and your experience increases, your income will also rise.

Being a filmmaker in Indonesia is not as bad as you or your parents might think. You have to do your best because I’m a freelancer, so I have to do my best to make studios and companies call me and employ me. We have to be a good man, a good person. We have to have the right qualifications, and then we can do well in the Indonesian film industry.

I’m sure you’ve had some difficult or challenging moments as well. Can you talk to us a bit about them?
Actually, I did have some problems in my line of work. The biggest problem is actually when I work with very hard people to work with. Directors can be dictators, and producers can probably have problems managing teams as well. I have to adjust and adapt myself to the different studios and directors. Maybe that’s the most challenging thing. So long as I can adapt and do my best, I don’t face any problems. I’m the assistant director, not the director. There are no major concerns or problems.

But you have made films yourself. On your film, you are the creator, but on the major productions, you’re working on someone else’s vision. How do you reconcile between your own ideas and someone else’s ideas?
That’s a good question. Being an assistant director is actually not a path to being a director. It’s actually a different path. The assistant director is a part of the production team. He’s a bridge between the producer and the director, so my job is to work the schedule, make sure we have all the cast and locations ready. I don’t make a work of art, just like a director.

When I directed Angin, it was a very good experience for me, because I had to read many books and consult many different people, including monks and other filmmakers, as well as my professors. Then, reading the script, visual images pop up in my mind. I write it and share it with my team. It’s very creative, and also fun!

However, as an assistant director, I don’t have any satisfaction creatively. I only make practical things, much like an office worker, actually. I translate the idea of the director and then adjust it with the production team. For example, the director might want a helicam shot, but we don’t have the budget. So what must we do? We can shoot in this way, maybe using some tracks from a rooftop.

The most chaotic thing about being an assistant director is the mismatch. The location could be used on a Tuesday, but the actor is only available on Wednesday. That’s where it gets really stressful! For a director, the stress comes from something more creative in creating the visual and aural elements. When I make a schedule, I use Post-it notes on a calendar. Today, we’re at Monash. Tomorrow we’re at IKJ. What about when the actors are available? That’s the negotiation we carry out with the cast members.

The director has an assistant, and the assistant has another assistant. Of course, they all follow the comment of the director, and all three will work together. The second assistant director will bring the cast member to their wardrobe, and then he will tell the team what scenes they’ll be working on: “Scene 35 is a continuation of Scene 34. That scene, we shot a week ago.” So they’ll have to open the file and see what is needed to maintain the continuity.

You can read the entire interview in the sixth issue of CQ Magazine. Alternatively, you can listen to the episode of Up Close and Personal, from which the interview is adapted from. Garin Nugroho’s ‘Setan Jawa’ is scheduled for a world premiere during the opening night of the Asia Pacific Triennial of Performing Arts in Australia in February 2017.