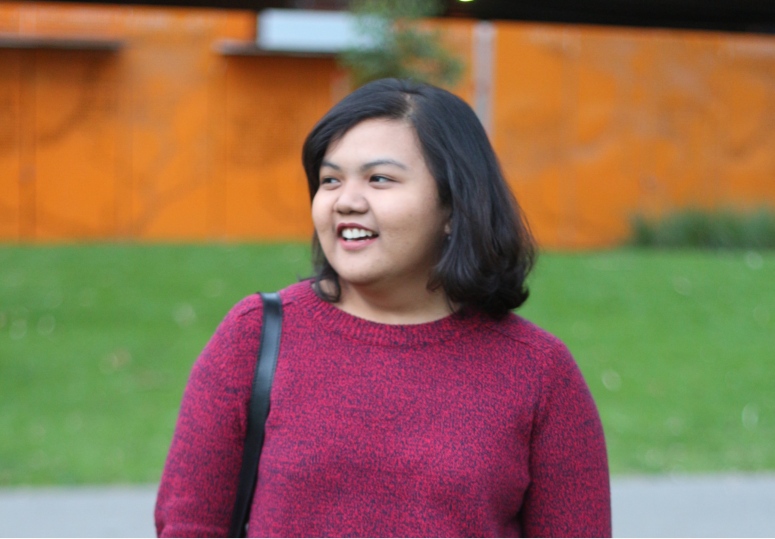 Indonesian filmmaker Rizka Sutiarso talks about her nascent filmmaking experience, the idea behind her film ‘Parallel Cities’, and the differences between Indonesian and Australian contexts of filmmaking.

Hi Rizka! Thanks for taking the time to talk to us. We’re here today to discuss your short film, ‘Parallel Cities’. For those who may not know of it, how would you describe the film?
The film has two characters from different cultural background who reside in Australia. They tell their experiences in adapting with culture here, and how they still hold on to the faith and culture they once brought from their home country.

So this is largely about their points of origin?
Actually, it focuses more on how Melbourne is seen as a cosmopolitan city from a foreigner’s point of view, without including the Australian perspective.

I see. How did you get started with this particular project?
Once we were put together in a team, I realised that we came from outside of Australia. In spite of that, we (and most outsiders we know) can adapt well with each other in this country.

What is it about Australia that allows for this?
Generally speaking, Australia is open to any cultural background, no matter what your race or religion is. At the same time, we still live in harmony, as Australia has a very high tolerance towards the faiths of others.

Yes, I am reminded of the #illridewithyou trend in 2015, when many Australians supported Muslims who were unfairly persecuted after the Martin Place attack.
Yes, absolutely. That’s actually a very good example. In this case, even though we live far from our own homes, we can still bring it here. In that regard, Australia can probably become the second home for us outsiders.

Having said that, your story has an especial focus on culture and difference. What was the reasoning behind this?
We want to show the world, maybe to those who hesitate to come to Melbourne in particular, that you can live peacefully in this city without worrying about where you come from. There are no concerns when it comes to racism, discrimination and such. As I’ve mentioned above, it is about Melbourne from the perspective of non-locals.

Both actresses in the film actually play themselves in this regard. What was the process like, directing people who are performing essentially as themselves? Was there a lot of specifics that come from you yourself?
It actually made it easier for me to direct them as themselves. They are not professional actresses, but thankfully there were no difficulties in shooting them in public places.

How much input did they have in the writing of the script?
A lot. We definitely used the script as the backbone in making this film, but it was created and written based on interviews with both actresses. It allowed us to manage our time and flow of story.

You yourself are Indonesian. What is your opinion on Indonesian cinema at the moment?
I have been a big fan of Indonesian cinema since I was quite young. I used to watch a lot of Indonesian horror films, but as time goes by and I grow up, I end up liking Indonesian drama and festival films as well. The industry has developed a lot, as it is also supported by the competent actors, actresses and filmmakers. Over the past few years, Indonesian films have also reached huge audiences back home, which is quite surprising. Thus, I always make time to watch at least two films every time I go back to Indonesia.

I agree. What are the biggest differences you can note between these two cinemas? After all, both countries are technically neighbours, but I don’t think there’s a lot of similarities I could see from the outside, so I wonder whether this is reflected in their films, too.
From what I can see, Australian films are likelier to resemble American ones. A lot of famous Australian films, for instance, are collaborations with American or British producers. ‘Mad Max: Fury Road’ is a good example of this.

In that case, beyond the language or dialect, how can you tell whether a film is Australian or not?
Actually, you can’t! In contrast, Indonesian cinema has a variety, a lot of topics to discuss. In terms of storylines, Asian cinema (which I place Indonesian cinema in) has a lot to discuss; apart from minor technical issues, their stories are some of my favourites of all time.

As for the filmmaking scene, describe for me the relationship you have with other filmmakers over there. Is it a particularly tight-knit and collaborative community, in a sense?
Most of the people involved in this project come from outside Australia, so we can relate the story with each other. Our executive producer is the one who suggests and encourages to actualise this idea into a film. Beyond that, I’m still discovering much about filmmaking itself in Australia.

Indonesia is currently facing up to some challenges of its own, in terms of racial and religious tension. With regards to the issue of blasphemy as apparently perpetrated by Basuki Tjahaya Purnama, the former governor of Jakarta (and its ensuing backlash), what is the discussion on the issue like over there? I feel like this film is somewhat timely, in a way.
As far as we can recall, the idea for ‘Parallel Cities’ actually came up before the issue did, but the film was completed as the issue itself was in full swing. On a personal level, it was a real shame knowing that in Australia, we Indonesians value people from any race and religion. Yet, back home it’s the opposite for quite a lot of people.

In terms of challenges, I’m sure you’ve faced a few. Can you describe for us the trickiest part about making Parallel Cities?
It’s hard to pick one! Can I mention more than one part?

Absolutely!
Well, at the time of the shoot, Melbourne has serious weather issues, which can be tricky for us independent filmmakers. Shooting outside, the lighting conditions can change fairly quickly. Such weather changes, often without enough notice, made it difficult for us to cope with the actresses.

Fortunately, the most outstanding part happened, twice, when we shot footage at the place of worship. The shots were just absolutely spot on.

Yes, I was just about to ask you something pleasant about your film!
In addition to that, this film was essentially created by two people: my teammate, Angelina, and me. At first, we were thinking that it would be impossible to make a good film with only two members. Surprisingly, it turned out well, and we received some praise from those who have seen it. Since it was my first film, I am delighted by that.

That’s a perfect segue to the next question: what inspired you to become a filmmaker?
I actually have never thought of becoming a filmmaker. It was certainly nowhere in my list of dream jobs from way back when. With regards to the filmmaking process itself, at most I was initially interested in scriptwriting. In fact, before I went to university, I actually wanted to take journalism as my major.

However, life is unpredictable, and sometimes you just go with anything you feel comfortable doing. I decided to change my major to film studies, and I realised that a film change a person’s life. I wanted to see the world by being a journalist, but being a filmmaker, I realise you can instead show everyone what it is.

What would you show people?
As a form of life reflection, film is an artwork that is very powerful to those who watch and relate to the stories on screen. It can bring back old memories, it can change the way you think, and even what others think as well. Being a filmmaker is a very challenging profession, but I would love to play my role in changing the world, especially for those back home in Indonesia.

Excellent. What’s next for you? Are you working on anything in particular right now?
Currently I am back in Indonesia. I have recently completed my studies, and I am keen to explore more of what the scene has to offer.