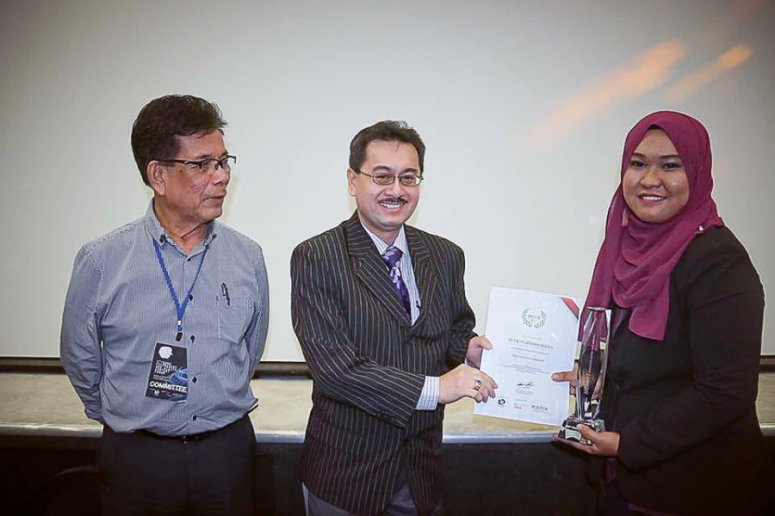 Fikri Jermadi finally puts to paper (or words on screen) his thoughts on the films of Putri Purnama Sugua, one of Malaysian short cinema rising stars.

There is a thing I do almost every time I meet Putri. When our eyes meet, we would smile in acknowledgement of one another, before I… proceed to look for a chair to smack her with. Rather than being an externalisation of the wrestling shows I watch on a (very) regular basis, this is an expression of the frustration I once had with her a long time ago, when she captivated me with a pitch for a feature film idea. The story was good, the conflict was interesting, and the figurative tea and biscuits was all laid out for me to sip and gobble, before I was hit with an unfortunately common sucker punch: “And then he finds out it was all a dream.” After having hung on her every word, I immediately and very nearly collapsed, before looking around to see what I could throw at her. It just so happened that what was around was a bunch of chairs.

The rest is history, for that was a number of years ago. In that time, Putri Purnama Sugua has developed and progressed at an exponential rate as a filmmaker, one that I don’t recall seeing as much in many students. A big part of that has to do with her background. Being a Sabahan, she carries with her a big part of that context, understanding that this is an issue that may present certain challenges within the Malaysian film industry. Having moderated a forum discussion on this, it is clear that she herself is acutely aware of how East Malaysians are seen on screen and treated off it.

That is something that she is incredibly keen to change, and she has made strong attempts to do so in the films I’m aware she’s produced and directed. Before getting into that, and to segue away from the paragraph above, you must understand that she is highly interested in the issue of stateless children in her home state. As such, she is very much invested in bringing into the mainstream ideas and identities largely situated on the fringe.

In the past, I have written similarly about Yudho Aditya, a filmmaker concerned with identities related to homosexuality and beyond. I feel like much of what Putri is doing could be described in the same light, at least in terms of increasing awareness. Simply standing on a soapbox and shouting aloud into the loudspeaker, though, is one thing. Actually understanding the correct diction and syntax to use, however, is a completely different thing.

We see a lot of this in the film ‘Dream to Fly’. The story tells of Aming (Bhulat), a child whose life is very much mired in poverty. He doesn’t even attend school, not understanding its importance. “Do you have any ambitions?” asks the off-screen interviewer. “What are ambitions?” came the reply. He lives with Pak Cik Tondeng (Zainal), a fisherman who adopted him when he came across him on the beach one fine day. Since then he has been living with him, but when the time came to enroll Aming into school, he lacked the necessary papers (primarily a birth certificate) to allow him the right to access basic education. The conflict in the film, then, is a tension between the old world and the new. Purchasing a birth certificate illegally is not impossible, but it costs money, something that’s a scarcity for a fisherman already squeezed by tight economic conditions.

Let’s go back to the diction and syntax mentioned earlier. In choosing the right words and sentence structure, I’m talking primarily about the language of film. One scene stand out as an example of this; as a bunch of other children head off to school, smartly dressed in their uniforms, they cross a bridge above Pak Cik Tondeng’s boat, with Tondeng, Aming and Tondeng’s friend. The friend is advising him on the dilemma. “Our paths have come to an end,” he said, referring to their way of life. “Aming still has a long way to go.” This line of dialogue is allied with the visual image described earlier, of the children on top and Aming at the bottom, a snapshot of society rarely achieved (or perhaps even intended to be achieved) in many other films. There is a mastery to this, for it is not an accident, and the those involved (primarily the director that is Putri) must take credit for this.

The semi-documentary style of the film is echoed in another film of hers, which is actually a documentary in its own right, one that featured stateless children, again living on the fringes of society. ‘Unseen Soul’ appears to prioritise a girl and her mother, though it must be said that the gender doesn’t necessarily make that big of a difference in terms of its ability to jerk our heartstrings. Once again, we see an almost-effortless glide across the filmmaking plane, as Putri skillfully unlocks much of what more experienced interviewers would have found difficulty to do. Witness the moment when Ina Murata, a 12 years-old girl, talk about her father, an emotional revelation on-screen that as priceless as it is difficult to get (at least in my limited experience as an interviewer). A big part of this has to do with the context of the text; she is very much in her element, amongst her people and in her comfort zone, and that ease off screen is translated well on it. 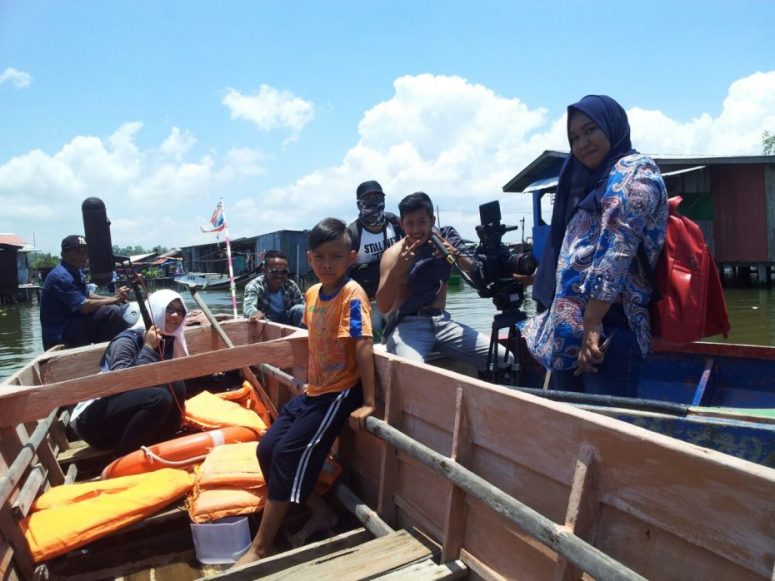 Even when she cuts across other genres, she doesn’t shirk from this core truth of her context, training her camera on the theme even from afar. By and large, public service announcements (PSA) are not generally seen as a serious form of creative expression, at least not on the global stage as I know it. Outside of Malaysia, I believe its neighbours focus more on short films and advertisements as arenas where you shine your skills, showing off what it is you’re capable of. In Malaysia, however, it can be taken just as seriously, a genre driven initially and primarily by the national oil company Petronas. In more recent years, other companies have also taken to it like duck to water, providing another avenue for storytellers to tell their stories. The late Yasmin Ahmad helped to big this genre up, and other filmmakers like Quek Shio Chuan and Afdlin Shauki have trodden down this path as well.

To that list we can add Putri’s name. ‘Sahabat Raya’, made for the Credit Counseling and Debt Management Agency (AKPK), almost literally had nothing to do with credit counseling or debt management (unless we’re talking about a debt of gratitude?). The story follows Hadli, who was greatly aided by a friend of his from a young age, before they were separated because of familial circumstances. Now an adult, he returns home to find his friend, and reconnect with the past. Again, the aesthetics of her previous films (clean and precise) is seen here, with vivid colours of the natural environment.

At least that had a happier ending. ‘Impian Dalam Harapan’, yet another PSA for AKPK, again featured characters from the working class, very possibly set in the same setting as her previous films. It features Asin, a young man who seems like he was forced to enter the workforce at an early age to support his family. Unlike Aming, however, the video begins with Asin assuredly claiming he wants to be a doctor. As the story unfolds, however, it is revealed why he is driven by this dream. The story is heartbreaking, primarily because the acting by the largely young cast is very effective. I rarely see this in this genre, as many focus on more universal themes, reminding us to the importance of family, nation, community and others. ‘Impian Dalam Harapan’ reverses this, focusing on and prioritising the personal as the anchor of its story. At the same time, it doesn’t mean that the bigger picture is ignored; a particular shot stand out, of Asin at the pier. He is flanked by the Sabahan and Malaysian flags, a reminder about how all this is actually not a foreign idea and tale, even if many Malaysians wish to forget or misrepresent it.

That’s not to say that it’s been a flawless road. ‘If Only’ is a reminder of this, a short film produced earlier in her career that is more reminiscent of films produced by young filmmakers when we think of young filmmakers. Three young men gather to share their dreams, and in doing so, reveal how shallow much of their dreams actually are. One wishes to be a gangster, which, in some ways, makes me feel like it’s a critique of the popularity of Malaysian gangster films, and their influence on the youth. One flashforward scene (of sorts) in particular is indicative of this, with the blocking of the actors nearly identical to scenes of gangs facing off in ‘KL Gangster’. It won’t be at the top of Putri’s best films list, but it does allow a peek into the world of youths in Sabah, as well as serving as a marker of how far she’s come (based on their upload dates on YouTube, I believe this and ‘Dream to Fly’ is little more than a year apart from each other, though I may be mistaken). It also includes the song ‘Benci untuk Mencinta’ by Naif, which is one of my personal favourites, so that’s no bad thing.

For the most part, these are the stories that’s worth knowing and worth remembering. Putri knows as much, showcasing how, across different genres, she is a filmmaker with a strong idea and vision. In discussing her films recently, a friend and I had a friendly debate about whether if the author theory applies to her. He insists that that is the case, while I, though an admirer of her work, was more hesitant in declaring her as such.

Yet the more I think about it, the more my doubts fade away, largely because there is not that much I can think of to actually and credibly oppose that. There is indeed a strong worldview we see in her films, in the sense that the different lenses of these genres remain trained on that which she knows best and believes to be important. There is that adherence to a high level of quality, one that is not always seen in many films by someone still so young. There is also a fire that burns in her belly, a fierce determination means she’s not afraid to stand up to opponents, critics and university administrators in fighting for and telling her stories.

What’s astounding is that they are not necessarily her stories, but the story of those who probably wouldn’t have a voice otherwise. The issue of stateless children is not a particular unknown, but to have someone explore them in a narrative context like this is more unheard of. Perhaps it is me who need to keep more of my ear on the ground and see more films, but what I have seen, heard and know of Putri also means that, even if I was undecided about her auteur status, she very much deserves to be in the discussion of who the best young filmmakers in Malaysia are. In that regard, she deserves and probably will get something more of a handshake from me.

It may be because there may not be that many chairs around, though.

Putri won multiple awards at the recent Malaysian Digital Film Awards, including the Best Young Filmmaker award, and is a participant in this year’s Asian Film Academy in Busan, Republic of Korea. She is also a panel member of Voices from the East, a discussion East Malaysians in Malaysian cinema at the recent Young Filmmakers Forum. Check out her films on YouTube here.