Fikri Jermadi preps for this year’s screening by stepping back a year to 2019.

The first film of the 2019 batch is ‘Evaded’. Directed by Christel Draycott, it is possibly the first of the lot to play around with its depth of field. This may be connected to the story; staying true to the minimalist theme thus far, we meet two teenage sisters, Megan (Milli Tansley) and Libby (Isobel McNerney). They are stuck at home, without parental supervision, as their mother is away on holiday. I had initially filed that under the ‘hmm, is that proper’ category, but soon realise that it is an issue not to be contained in any box just yet.

If anything, that packaging should be unpacked, because the film deals with what children should (or would) do in the case of abandonment. My biased perspective as a parent makes it difficult to imagine such a scenario, but then again, there all sorts of different and extenuating circumstances everywhere. Though ‘Evaded’ never really got into the mother’s motivations, it remains useful in providing a youthful perspective on an issue that may be more prevalent than you would think.

In particular, the somewhat inevitable conflation of roles is always a good source for conflict. Megan, as the older of the two, attempts to maintain the façade, steadying the ship the best that she can. Libby’s more reactive nature betrays an instinctive morality that we could perhaps all get on board with. Yet, even as the title suggests an irresponsible mother, Megan has the foresight to avoid what may be an even bigger problem: social services. The implication here is that once you are in the system, you don’t get out, forever tagged with an undesirable label. The probably of sibling separation is also a spectre that haunts her.

In trying to avoid this trap door, Megan then tries to, in her own way, assume responsibility for the both of them. Of course, this is something Libby is quick to point out: “But you’re not mum!” Whatever they are, what’s more certain is that both are in a fairly big and serious pickle. I would have liked for a more concrete solution, but then again, this is not the kind of story whose conclusions are neatly tied up in a bow. The film remains rough around the edges (the close-up shots on Megan captures her emotion well, and more of them would be welcome), and you do get the feeling that the film’s writer, Ella O’Brien, may have bitten off more than she can chew. Nevertheless, ‘Evaded’ has left me with plenty of food for thought. 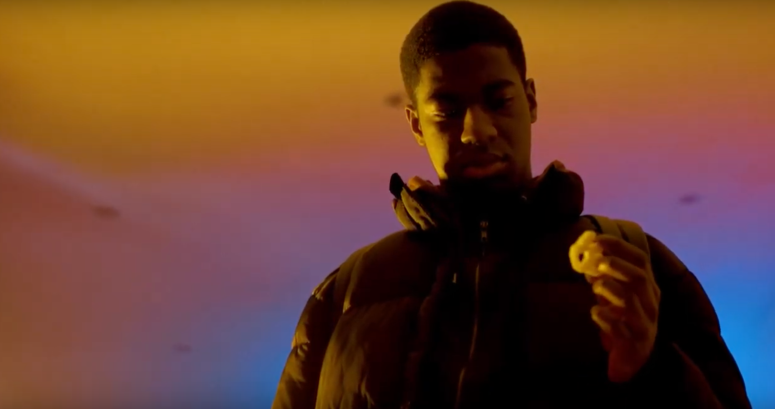 ‘Flash’ is situated on the other side of that spectrum, though it doesn’t mean it is not enjoyable. On a photo hunt one night, Charlie (Jorden Myrie), comes across a wallet. Checking it out, he discovers a photo and an address inside. Realising that it is nearby, he decides to pop along to return the wallet. Entering the house, he quickly realises that all is not quite what they appear to be, though I must say that this is also self-inflicted; if you’re in a stranger’s house with suspicious lighting, you really shouldn’t be there for long.

That’s not to take away from the actual lighting itself. In contrast to many of the other short films here, ‘Flash’ is the one with the most creative mixture of lighting set ups. Kudos to the cinematographer, Olivia Kininmonth, for having a bit more fun with the CTB and CTO sheets. Of course, it could be argued that other stories called for a more realistic approach, and that would be right. Nevertheless, taken on its own merit, some of the lighting here made the weird things just that bit stranger, which I can appreciate. I also like the musical selections, featuring an 80s vibe into the equation.

Beyond that, however, there’s little I really want to get into. Again, the terms low budget and high concept come to mind; much like ‘Signed.’, it could be argued that the film also brings into discussion the historicisation of the soul. We could also get into a more racial discussion (Charlie is black) and the tropes of films veering more towards horror. However, that’s not something I wish to contribute to, as a retread of previous footprints may well less the short and sweet nature of this film. Laurence Mason-Guetta and the team did a good job here, learned their lessons, and can move on with their heads held high.

Finally, we get to ‘Untitled’. Directed by Lebene Drury, it tells the story of an author (Charles Evans) who struggles to come up with new ideas. Of course, a lack of sleep and prepared preparation is never helpful in such scenarios. Nevertheless, our friend remains intent on forcing himself through this writer’s block, and a fair number of the film’s scenes are played out as the writer’s narrative fantasies come to life. This reminded me of Valerie Faris and Jonathan Dayton’s ‘Ruby Sparks’, as well as ‘The Dying Artist’ by Kavivarmen Vigneswaran.

Here, there is a strong reliance on dialogue to tell the story. Though not a bad thing in its own right, it felt as if a reduction of that would have made a bigger impact. For instance, his mother’s voicemail, expressing her delight at his success as an author, felt a little forced and expository. Yes, it gets us into the story fairly quickly, but something a little subtler, perhaps through a more visual prop, would have been more effective. Again, maybe the compressed filmmaking conditions may not have helped, but it feels like the film’s starting and end point: ‘Untitled’ is a film about someone in search of an idea, possibly because the filmmakers themselves were on that same lookout.

That’s not to say that the search was completely unsuccessful. Some of the written stories, as they are realised on screen, prove to be a delight. They’re driven by Chloe Oxley, the actress who performed different roles in these scenarios. Her ability to shift into different moods provided drama, comedy, and dramatic comedy with great aplomb. In particular, there is one scene with very good comic timing; I failed to suppress my laughter, and a few heads turned my way in the café earlier. Unfortunately, this is limited to a few minutes at best, but a little more action here, allied with a little less conversation, would have made this a better viewing experience.

All in all, these films remain interesting to watch, as it focuses on some themes and issues I was not so familiar with. Additionally, these filmmakers are also at the beginning of their own journeys, a useful fact to contextualise the viewing of these films. It could be argued that many of them exceed my good self at the same stage of our careers, so I look forward to seeing what the new group has to offer this coming March.

Read our thoughts on the 2018 films here. The 2020 BFI Academy Gala Premiere and Screening takes place on Thursday 5th March 2020 at Broadway in Nottingham.