At the risk of sounding a little out of touch, a bright spot of the COVID-19 pandemic is how film festivals have transitioned online, allowing for audiences all over the world to watch films previously (and exclusively) confined to physical settings. South by Southwest was one of the first to do this, and Annecy International Animation Film Festival upped the ante, adding talks and discussions into the mix. Hot on their heels is Locarno Film Festival, who offered an especial look on Southeast Asian films, from which we’ll focus on Malaysian short films for now.

One of these is ‘High Way’. Made by Chia Chee Sum, the film is set in real-time in a Malaysian low-cost flat (Projek Perumahan Rakyat [PPR] Laksamana at Jalan Peel). We follow Danial (Raja Danial Hidayatullah Shah), a young man who uses his motorbike to move about the building. Though a little unsightly, I can vouch for its authenticity. That bike itself is a common feature of the working class Malay male, a brand of masculinity denoting a certain independence.

All this and more came through in the film’s fine technical qualities. I like the framing and the mise-en-scene, with enough elements to fill the screen without crowding it. Shot by Esther Tan (who also has a cameo in the film), some of the patterns are reminiscent of Chris Chong’s work in ‘Block B’, portraying social interaction (or their lack) in single snapshots. 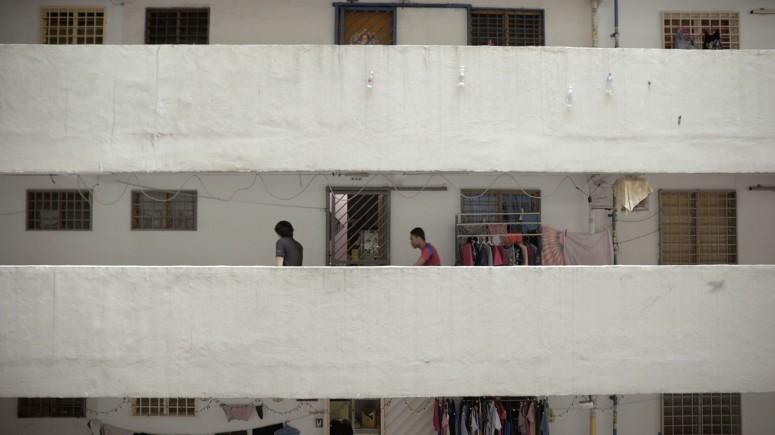 The sound is also crisp and precise. In fact, the film’s title reminded me of Aw See Wee’s ‘Highway’. Given how See Wee himself is keenly aware of the impact of sound, this connection is not entirely inappropriate. These low-cost flats are often cacophonies, a visual soundscape unmasking your sense of privacy, and Chee Sum plays around with this; we get a sense of who people are without seeing them. There is even a part where the diegetic sound fades, allowing for musical cues to come in. Exit reality, enter fantasy.

Continuing this conflation of private and public is the MacGuffin that is Danial’s missing shirt. It might have gone missing when hung to dry outside their unit; in addition to literally airing your laundry in public, it’s also easy prey for anyone to come along and take it. This premium of space also comes into play between Danial’s mother and father, who, intriguingly, appear to live in different units. Are they separated? In the Islamic sense (as practiced by Malaysians), couples who decide to divorce (by invoking the talak) have to separate immediately, at least to a different room in the house.

Or it might be something else altogether; the discussion above might have informed the film’s subtleties, but that’s not to say the unspoken isn’t romantic. There is a moment later in ‘High Way’, when Danial’s father asks him to help deliver a flower painting to his mother. It’s not the real thing, but it’s materiality does not make it any less sincere. Another incident in the film involving Danial also suggest that romance is not dead in the flats, it’s just spoken through a different language. 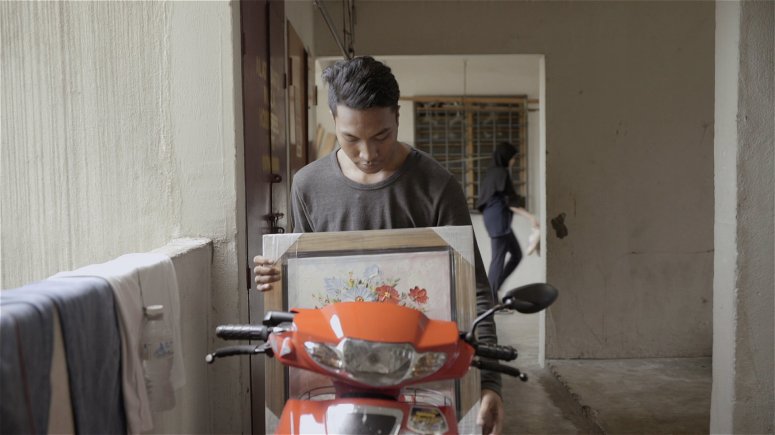 That makes ‘High Way’ an intriguing film that balances fantasy and reality. The title itself is somewhat ironic (many highways in the Klang Valley where the film is set would not allow them to be ridden there, making Daniel’s friend’s suggestion of riding a bike on the highway later that night more daring than you might think). However, there’s more than enough to meet the eye here, making this a film that could remain relevant for some time to come.

Similarly, ‘The Ruby’ is set in downtown Kuala Lumpur, an area left in a state of disregard not entirely dissimilar to the PPRs seen in ‘High Way’. The title itself refers to the name of a building in the film, an old cinema crumbling under the weight of its past glories. Is this the fate of all that is old in the city? A clue lies in the background, the bare infrastructure of PNB118 (projected to be the world’s second tallest building) casting a shadow on all below. Two backpackers at the start of the film noted the city’s lack of originality: “We should have stayed in Penang.”

The story follows Intan (Syarifah Aleysha), a teenager with a feistiness that belies her youth. Running from a troubled past, and looking for cheap accommodation, she comes across a variety of characters, such as an old uncle (Chew Kin Wah) and a street peddler, Tony (Phoon Chi Ho). As the story and her interaction with them progress, she learns more about herself and how to best tackle her own conundrums.

The names above form an eye-catching cast. Syarifah Aleysha is an actress with a rising profile, while Kin Wah is seasoned not only in Malaysia, but also in Indonesia, a leading light in the rise of Chinese-Indonesian films. Closer to home, Chi Ho (the co-director of my first official film) is established in the stand-up scene, making his “You comedian or what, ah?” line more self-reflexive than most. Hawking his wares, it did strike me that he has a DVD-selling face. He would refute this by saying he sells ties, but Intan pointing to the films on the table prompted a literal laugh-out-loud moment from me.

The racial pastiche above (an emphasis in the film itself, with a sweeping shot at the start of ‘The Ruby’ evidence of this) is also reflected in the film’s dialogue. However, some of the conversations here feel a little stilted, perhaps due to the shifts in language. Adam Zainal’s ‘Kantoi’, dealing with a similar protagonist and theme, offers a more natural flow. Perhaps such hesitance is a reflection of Intan’s own swirl of emotions? In finding out more about the director, Ling Low, I came across ‘Closure’, whose take on the emotions that lie beneath felt far more natural, perhaps because of its singularly-English medium.

The film’s pace did not help either. Intan does a lot of waiting around in the film. As we don’t see as much of why (at least not initially), we are denied the same motivations that drive her. Curiously, this lack of curiosity could be addressed with a longer runtime, as more shots and scenes intercut from her past might offer greater variety, helping to speed things up and better connect us to her. It could also reduce the reliance on telling, as exposition through dialogue can be less impactful. 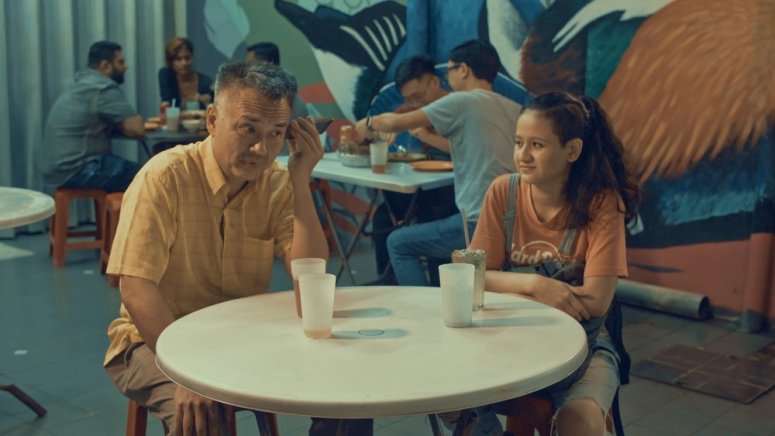 I did like the match cuts, however. Ling worked something similar with ‘Closure’, but John Hafiz’s work here is a step up, cleverly linking the past and present. I also have plenty of time for films that work in a love of cinema. Given the uncle’s past as a projectionist, there’s more than a whiff of Toto and Alfredo in ‘Cinema Paradiso’, as well as Muzzamer Rahman’s ‘Sang Projeksionis’. As an aside, the production designer himself, Mahen Bala, previously made a mini documentary looking at such a projectionist; Kin Wah’s character here feels like Mr. Moorthy fleshed out in a fictional sense.

Finally, we get to ‘Liar Land’. Directed by Ananth Subramaniam, this film was made as a result of Ananth and his team winning the 2018 BMW Shorties with ‘Colourless’. That competition has been going on for a while, with a fine tradition of high quality short films made with the chunky prize grant. That is no different here, and my interest is stoked further when the official blurb of the film asks, “What if Bonnie and Clyde had kids?”

That explains why we follow Maya (Mia Deen) and J (Syed Muhammad Baqir), two young children of outlaws on the run. Kept in a safe house and left to fend for themselves, the kids begin to push their boundaries, in part because of a yearning for their own parents, a love that leads to them using them as role models. However, pushing the boundaries have a slightly different meaning when the house has stolen money and loaded guns.

Watching the film, I wrote down in my notepad: “Albert Bandura would have a field day with this film.” The originator of the social learning theory, Bandura proposed the idea that people would learn by way of modeling the behaviour of others. The more controversial aspect of his theory is how children would uncritically imitate bad habits. Scenes in the film of children exacting violence upon Barbie dolls, for instance, is not too far a step from Bandura’s bobo dolls experiment, in which children would mimic the violent behaviour of adults.

In ‘Liar Land’, flashbacks of both their parents would contextualise the film’s present. What is in the present, though? I’d suggest the film’s main theme to be innocence lost, of a childhood not given the chance to fully grow. This came in very early on, with the children watching a cartoon on television. However, the framing is not complete, showing only a part of the television screen itself. Right away, that became a signifier indicating how this is not a happy story. Maya trying on her absent mother’s clothes and accessories would only hammer this home further.

In a way, it could be contrasted with the local neighbourhood kids, who would spend plenty of time playing outside with each other (though their own activities are not the most commendable either). Maya, looking out the window, does so wistfully, the happy children outside almost a visage, a reflection on the window transposed over her sad face. In case we miss it, Ananth makes sure the bars on the window locks in the meaning to be made.

Having said all that, Maya and J are not necessarily bad children. In one key scene, as they venture outside to observe the neighbourhood kids (who were cruelly mistreating a dog; I’m sure the crew took the best possible care, but was very difficult to watch all the same), J took the opportunity to stand up against that. It was a moment of righteousness, brief though it may be.

Relative to the others, ‘Liar Land’ is a film that is unique in the sense that it kept me on the literal edge of my seat. Both ‘High Way’ and ‘The Ruby’ have their own qualities, but while social commentaries and coming-of-age stories are more than welcome, every once in a while you just want a film to truly make you wonder what happens next, a fine treatment of an intriguing ‘what if’ as mentioned above. That’s a quality that’s difficult to get, so kudos to Ananth and his team for attaining that.

Overall, what the Malaysian short films selection at Locarno have shown is a high degree of quality and variety. Some, like ‘High Way’, may travel well on the international circuit, especially with Western festivals keen on highlighting social imbalances elsewhere (a not unproblematic issue in its own right). Others, like ‘The Ruby’ and ‘Liar Land’, feels like a good test drive for directors stepping up to more mainstream demands. All, however, are good examples of the quality in Malaysian short films I have always believed in. Long may these cubs roar.

These films were selected as a part of the Open Doors programme at the 2020 Locarno Film Festival.