Having had a look at the Hollywood summer blockbusters, it’s now fair play to cast the same eye on the Malaysian scene. Fair play it may be, but to compare and contrast between the two, to some there is no contest. One is a money-making machine, with the aim of making more money. The other aims to show as many slices of Malaysian life as possible on screen, playing around with themes like religion and identity to spark further debate and discussion. One has CGI-heavy superheroes flying against aeroplanes, the other relies on Zul Huzaimy and Afdlin Shauki to sell tickets.

This list, then, looks at the movies that I would be interested in, that I would consider lining up for at Midvalley and One Utama (the Cineleisure lines tend to be too long for my liking).

Before delving straight into this list, it has to be noted that there are big differences between this and the previous Buzz list. The main one is the fact that that one only looks at the films slated for summer releases. This one, on the other hand, looks at the whole of 2008, based on information garnered from sinemamalaysia.com.my, the online Malaysian film database. It’s not exactly perfect (more on this later), but it is as good as any Malaysian film sites out there. I also put my ear to the ground and see what comes out (though not into my ear, thank God). If there are movies that you think I have failed to consider, do drop me a line and let me know.

Another reason why this looks at the whole of 2008 is the film distribution structure in Malaysia itself. Unlike Hollywood, there is no ‘summer’ season. In reality, summer lasts all year; in film terms, the minute the movie is done, it is out there (would be interesting, wouldn’t it, should we have the same structure? All the ‘Impak Maksimas’ and the ‘Cicakmans’ out in one block, and your Yasmin Ahmad and Tan Chui Mui movies in another). Furthermore, the number of movies produced is dwarved compared to America’s cultural-industrial machine (the movies made for summer probably matches the Malaysian industry output for a whole year).

With that in mind, then, we’ll start with…Congkak. Fair enough, I can hear the man in the back shouting out at my lack of mind to begin with this. And, in normal terms, I can accept that. Successful though the filmmaker he is, Ahmad Idham doesn’t exactly cover himself in glory when it comes to making the sort of movies that stick with you once you leave the cinema. Nevertheless, I put it here, partly because I expect it to be a blockbuster, but partly it’s…about congkak. If it’s not, then it should be. And a horror film about congkak as well. I’ve long held the view that more films about aspects of our culture should be made. And congkak is ingrained into Malay/Malaysian/Indonesian/’any other country that wants to share the limelight’ culture. If you don’t know what congkak is, then…join a local uni. Or something.

A more recent and important contributor to Malaysian film culture, then you’ll definitely have heard of James Lee. Commonly known as one of the founders of the indie scene, he’s making a crossover into the mainstream film world with Histeria. It follows the adventures of seven college students, who pretended to be crazy for a joke. Caught out, they were sentenced to clean the college during the semester break, during which time strange things happen to them. And yes…if you guessed that James Lee might have kicked started his mainstream career with something as gory as horror, you guessed right. I don’t actually know whether it’ll make money, but given James’s interesting style with his films (perspective, empty spaces. But this applies, somewhat, with almost all the indie movies), we’re in for a treat. 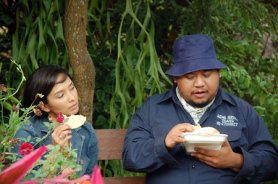 The same could also be said about Papadom. Not just because it sounds delicious, though it sounds typically Malaysian (or Indian. Even if it’s not, it sounds like it anyway). Mainly because it’s got Afdlin Shauki in it. I once wrote in the review for ‘Sumolah’, stating that Afdlin is the closest of today’s entertainers that we have to P. Ramlee, with especial regards to comic timing, as well as talents behind the camera. Of course, it was edited into ‘Afdlin is P. Ramlee’, which got me some flak from people. His movies are entertaining; failing which, he is always entertaining, sugarcoating social issues into sweet tasting comedy. And he half-semi-regularly updates his blog, which does make for interesting reading when he does. Oh, the movie? It’s about a father’s love for a daughter, or rather, over-love for his daughter. He loves her so much, he gives her Nasi Kandar for lunch at school almost everyday. Though I wouldn’t have minded Nasi Kandar for lunch at school. 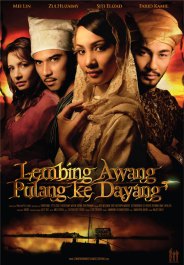 From Nasi Kandar to an even rarer delicacy: that of the period Malaysian movie. Yes, ladies and gentleman, despite our rich history and culture, we don’t make movies about our own history (off the top of my head, there’s probably a one-in-twenty strike rate right now). In fact, Saiful Apek would probably get through three movies before someone finally decides to move and say, “Hmm, 50th year of independence. Let’s make something.” So when one does come along, appreciate it. Even if it is shit. We don’t know yet the fate that awaits Lembing Awang Pulang Ke Dayang (what a title as well!). But if people flock to star power, then this movie has plenty of it. No Saiful Apek, but we’ll make do with Farid Kamil, Ejad and Zul Huzaimy, who play out a love triangle of sorts in 1776. And oh, I so wish that the Malaysian tendency to give away the whole story is changed! Infuriating, I tell you. For that reason, don’t visit the movie’s page on Sinema Malaysia.

Despite that, the Internet is still a useful hunting ground. For example, Yasmin Ahmad blogs extensively to document her experiences. Inadvertently (or otherwise: she does have a background in advertising), she has managed to build up interest in her movies. One example is Muallaf. The story follows two sisters who escape from their abusive father, and finding solace with another guy, Brian, who has a similar background to them. Together the girls and Brian learn to confront old ghosts and lay them to rest (I literally lifted this line from the aforementioned blog). That’s not to say that other sources haven’t done their part; this was the movie that Sharifah Amani shaved her head for, an act that hit the headlines for all the wrong reasons last year, unfortunately. Of course, you could say that Kak Yasmin could have seen it coming from a mile away. Lucky for us, then, that she doesn’t seem to care that much about what other people think.

Another brave filmmaker we have is Amir Muhammad (who probably could have seen the ‘Communist’ controversy a mile away as well). Since then, he’s been moving from behind the camera to even further behind the camera, producing other films and indulging in a spot of writing. Later this year, his mainstream horror fare (what is it with the indie darlings moving into the cinemas with ghost stories?) Susuk comes to haunt us. Admittedly, it is a double act with Naeim Ghalili, who I’ve not heard of before, give or take a few credits on ‘Cinta’ and ‘Lelaki Komunis Terakhir’. Nevertheless, my interest is piqued. Amir wrote of his frustrations with the extensive post production stage. “But when I saw the fully graded film, with the mixed sound, in Bangkok last week,” he wrote on his blog, “I got all excited all over again.” It should be very interesting, then.

One such production that Amir is a producer of is Azhar’s film. The film follows Sidi, who is being taken care of by his father, Adman. The story takes place in a flat that was scheduled to be demolished by the end of 2007 (a quick search online failed to reveal as to whether the Bukit Chagar Flats have actually been demolished. Anyone got a lead on this?). I’m quite keen on this, because this is Azhar’s first feature film, and he’s practically a darling of the indie scene. Attend any event, look up short film screenings online, and invariably his name pops up somehow. Not that it should have been surprising; he has served a varied but useful internship somewhat, being involved in various roles on plenty of other productions. I suppose this could be seen as his graduation film. And as a bonus…it’s not a horror film! 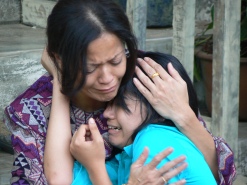 While we’re on the subject of graduation, another interesting production is Wayang. Actually, I should rephrase it; it is a production that I have an interest in, having followed it as a photographer. Even if that wasn’t the case, it would still be a movie to keep your eye on. A part of this reason is because the film extensively uses wayang kulit. Like I said earlier, we tend not to delve so much into our history and culture, and ‘Wayang’ at least bucks the trend in this regard, as it follows the trials and tribulations of the family of a tok dalang. Secondly, it is about as close as you can get to an academic production. Directed by Prof Hatta Azad Khan (former Istana Budaya director, and currently a dean at Universiti Teknologi Mara), the film employed lecturers and students alike in key positions on the production. Talk about getting experience, then.

Judging by this list, Afdlin is another one getting plenty of experience. Brave, a film he made in Thailand with Thanapon Maliwan. The story is set in Thailand, following a young man who tried to save his brother’s life by stealing data from a bank. I couldn’t find the film on Sinema Malaysia, which makes me wonder as to the classification of this film. No, not whether it’s top secret or not, but whether it’s considered a Thai or Malaysian movie. It’s already been released in Thailand, but Afdlin’s blog notes its Malaysian release some time in 2008. “Fear is a state of mind,” says the tag line. It aptly describes this venture, as Afdlin moves beyond borders to make movies. It is a brave act, one that is being followed by Ho Yuhang (whose next film will have Korean involvement). Cross cultural cooperation are always interesting, and this is one that I’ll keep my eye on. 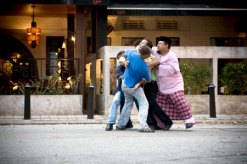 Closing this list, Sepi is Kabir Bhatia’s effort following ‘Cinta’. In keeping with the multi-story plot that he’s so keen about, ‘Sepi’ follows three individuals who find out the meaning of life in big, bad KL. The film climaxes with all three of them coming together somehow. It sounds interesting enough, but I am interested to see the cast (Afdlin Shauki, Vanida Imran, Nasha Aziz, Tony Eusoff), which is as A list as they come. There’s still not too much info available, but this is something I’ll definitely keep an eye on.

So, there you have it. No ‘Duyung’, though plenty of horror fare to scare the faeces out of me. Some I am waiting for more than others (‘Wayang’ being an obvious one), while others I’m wondering how I could watch them here in Korea (‘Congkak’ at Pusan, anyone? :)). But those are bridges that I’ll cross later.

And the biggest question of all (maybe): why the durian? Well, do you know how difficult it is to look for generic pictures of Malaysian cinema (literal and metaphorical)? Even the GSC pictures all show empty halls. Let’s hope that’s not the case for when this movies are released, because Malaysian films are like durians: give it a chance, you might like it.

Although having said that, sometimes they stink like hell, but that’s another story…

Fikri found a picture of himself on page 10 of Googling ‘Malaysia film’.