I have to admit, the last place I would expect to be able to watch an obscure Indonesian movie is in my ‘Director’s Analysis’ class. A surprise, because the class itself was actually held. The past few weeks have done much to dent my confidence in my teacher’s punctuality and strength of word, for he has already cancelled two classes to date, and was late for another. Later on, with assignments, homework and projects piling up, we will no doubt have to reschedule things later.

I say fortunately, because ‘Chants of Lotus’ sang songs that absolutely mesmerised me.

However, you might be wondering what it’s all about. You might be wondering why the Google search fires more blanks than Newcastle United. Quite frankly, you won’t find much publicity or much information about this movie elsewhere…until you look for ‘Perempuan Punya Cerita’. That is the native title of this film, and it makes a better link to the different segments in the film.

The movie itself is one that is worthy of not only further exposition, but also further exploration of the themes that the movie itself explores. As can be seen from the Indonesian title above, the movie tries to concern itself on issues facing women in Indonesia. But that’s following the title. The way I read it, it’s a collection of stories that explores sex and innocence, love and lust, trust and deceit…you get the idea. In short, this is one of the most gruesome movies I’ve ever seen. Not necessarily in terms of gore, blood and violence, but in terms of the society it portrays, the helplessness of the characters, and the seemingly endless circle of unchecked, adulterated, lawless life.

That, however, is describing the movie for what it is. How does it tell that gritty reality, then? By way of four stories, we follow the paths of different women and girls as each story, set in different cities in Indonesia, explores similar, yet different themes. Thus, not unlike the ‘I Love You’ series set in Paris and New York, the film has different directors (Nia Dinata, Upi, Lasja F. Susatyo, and Fatimah T. Rony).

The first one, ‘Cerita Pulau’, explores the trials and tribulations that a midwife, Sumantri (Rieke Dyah Pitaloka), and a mentally disabled girl, Wulan (Rachel Maryam), goes through. You’ll have to understand that in this case, abortion is not something that Islam (or any organised religion that I’m aware of, correct me if I’m wrong) allows for. And Indonesia is the biggest (in terms of population) country in the world with a Muslim majority population. Put those two and two together, and you can guess that being someone as specialised in conducting abortions as Sumantri is not a popular choice. Bring an autistic girl into a picture, one who was raped and is pregnant because of it, and you have a very tricky situation. Not tricky enough? Throw in breast cancer for good measure, that would really throw things off course. 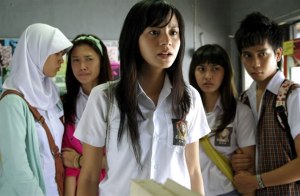 And off course, it was. “You performed an abortion, right? That case is still pending on you,” said the police officer, referring to an earlier case, when Sumantri attempts to report Wulan’s rape. In a split second, then, we see the access to justice that someone as marked as Sumantri gets in such situations. Even when the case is as clear cut as it could be, the difficulty of obtaining justice and evening the balance is of the highest order. Who cares if the cut becomes clearer, and the perpetrator was identified? Doesn’t matter if he admitted the crime, the society at large becomes the police, and sets its own course of justice. To the tune of a miserable amount of rupiahs, that is.

Though Sumantri’s position is clearly untenable, I also see how the story also removes the layers of protection that the disabled never had to begin with. As much as I am driven to empathy with Sumantri, I am choked with sympathy for Wulan’s character, a girl who did not understand what happened, especially by the films end. I suppose I should put in a disclaimer and say that it’s driven home further because I have an autistic brother myself. Nevertheless, the grittiness of the reality, and the grittiness of the portrayal hammered home the nail. In some scenes, I wondered whether the budget for the lighting is adequate, though this is no bad thing. If anything, it made the darkness more sinister, an uncomfortable feeling with so much of it around. 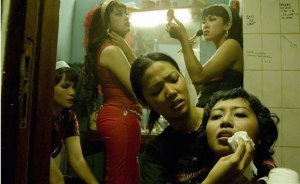 In contrast to that, ‘Cerita Yogya’ becomes something of a relief. For one, it’s set in the city, instead of a remote island. Familiarity breeds content, and coming from the depression hole that is ‘Cerita Pulau’, the city of Yogyakarta is a welcome one. The story itself is relatively light hearted; in fact, it may well be the lightest of the lot, and provides the most humourous moments in the whole film. That’s not to say that the story is any less gripping. It follows a group of high school students who are incredibly curious about sex, and, driven by porn, indulges in its experimentation. Truth be told, that is not telling the whole story; if sex is the free seafood buffet at Kuala Selangor, then the students are hungry, homeless people who fasted the whole day.

With youth, then, comes shallowness and lack of regard for the consequences of their actions. By this, I mean unprotected sex. The story kicks off with a group of schoolgirls, led by Safina (Kirana Lasarati), charging into an internet cafe, confronting a group of boys surfing for porn. “OK, who made her pregnant?” she asked. “All of us!” came the answer, and in a flash, a snapshot of the entire segment can be made here. Sex, being an action that potentially has a life-changing experience, is being treated nothing more than just a game for some. And the girls aren’t helping either; the girls, in their infinite wisdom to abort the foetus, decided to put the pregnant girl on a diet of pineapple and fizzy drink.

At the same time, a visitor from Jakarta, Jay Anwar, decided to drop by and integrate himself with the group. Having heard about the sexual promiscuity of those in Yogya, he decided to see for himself how true it all is. Slowly, but surely, Safina finds herself falling in love with him. Despite being the one in the group who is guarded and not involved in the sex buffet mentioned earlier, her growing attraction to him makes things greyer than she would have liked. Sex and love is a game for others, but is it one that she herself is willing to play? Is it even a game? This segment, then, explores that in great depth, and the chemistry between the cast makes for a great performance. At times, even, it is a fun one, and you can’t help but laugh along to their antics sometimes.

Unfortunately, that is about as much fun as you’ll get from this film. In ‘Cerita Cibinong’, Esi (Shanty) is a single mother who works as a janitor in a dangdut club. Having experienced what life can be like without education, she strives her hardest to ensure that her daughter Maesaroh (Ken Nala Amrytha) is protected from the vices of life. She didn’t try hard enough, as even her boyfriend sexually harasses her daughter. Eventually, they find help from her friend, Cicih (Sarah Sechan), a popular dancer at the dangdut club. But even under such circumstances, things do not turn out as planned, as Cicih has ideas of her own about Maesaroh.

In short, this is the one segment that made me feel sick. I couldn’t bear watching an abortion scene in the previous one, but that was because it was visually gory. This, out of all the segments, is the one that really grabs my attention, peels my eyelids wide open, and say, “Hey dickhead, this is something that happens to people elsewhere in the world. Watch it and weep, dumbass.” I didn’t quite weep, but neither was I unable to get rid of the unease I felt by the segment’s end. If ‘Pulau’ has overbearing religious elements, and ‘Yogya’ looks at love as a game (and the consequences of that game), then ‘Cibinong’ forces you to consider innocence, and more importantly, its loss. Once again, the dark backdrop of the environment serves to highlight the sinister, insidious nature of those who lurk in the dark.

Such darkness, in a metaphorical sense, can also be found in the final segment, ‘Cerita Jakarta’, Laksmi (Susan Bachtiar), whose husband just died of AIDS, finds that she is afflicted with the same virus. Time, then, is of the essence for her, but in spite of this (perhaps because of it), she clings on to her daughter, Belinda (Ranti Maria). Her mother-in-law, on the other hand, wants custody of her granddaughter. Unwilling to give her up, Laksmi goes on the run with Belinda, but soon enough, the lack of a job and money catches up to them, and she is forced to decide between Belinda and her own survival.

As mentioned earlier, familiarity breeds content, and the familiarity with AIDS and stories about AIDS helps to make this a more agreeable fare compared to the others. I am not trivialising it, but there is a sense that affliction with AIDS is a far more visible fare compared to child trafficking and abortion. Nevertheless, ‘Jakarta’ does not reach down into the darkness, it still effectively portrays the loneliness and, in effect, the discrimination against those with AIDS. This is thanks in large parts to the performances of both Susan and Ranti. Susan, in particular, makes me feel like I want to reach out and help her, and that’s not just because she is an attractive woman (Google her, you’ll see what I mean 🙂 ).

As a whole, then, ‘Chants of Lotus’ is a brave film that tells brave stories that wouldn’t be told otherwise. I say it is a brave film, because it does something that many people wouldn’t have done otherwise. I kept thinking of the time when I was in Phuket with my friends earlier this year. Seeing how the locals are exploited by the farangs, it is, as my friend put it, “a sad state of affairs. How they hell could they get out of this circle of exploitation and dependency?” I had no answer for him then, and I have none right now.

But in watching this movie, I feel that an answer, if not the answer, could be found from movies like ‘Chants of Lotus’. And for that reason, it should be more than just the staple showing at feminist screenings all around the world. This is a movie, a collection of four short films tacked together and released under a banner. In that strictest sense, it is a movie that is not the same as real life, with elements manipulated for dramatic effect. Nevertheless, the reality that it does try to portray is gritty and gruesome. While it is not your reality, perhaps, it is reality nonetheless.

This is a movie that will make you feel. Full stop.

Fikri thinks the movie would be right at home at the Freedom Film Festival.

One thought on “Songs to Remember – Chants of Lotus”