“Art is a medium for open dialogue. It is a public space for the meeting of different perspectives. Art can break barriers between people and make them more human again. It can bring about a rebirth of human feeling. That is art.”

The semiotics of Garin Nugroho’s photo-poetry is in the im-sign (image sign) and not the lin-sin (language sign). It is not in the prose but in the poetry. Garin treasures the cultural, the historical, the traditional and the spiritual that is ingrained in his subjective upbringing. In all these instances, none is separated from his enumerations, utterances within the landscape of his imaginary and real composition of films.

His creation comes in shapes of emotions that is true of a poet, a photo-poet. His graphical assessment of the environment is singularly treated as the nation is seen not in separation but in one with his motherland, Indonesia. His creation is a living energy that he empathises into a world of his own, like as if he is the one undergoing the dilemmas of his characters. He bestows upon them the freedom under oppression just like in ‘The Poet’. It is the freedom to create and to unleash the very act of becoming that he himself aspires
to be. 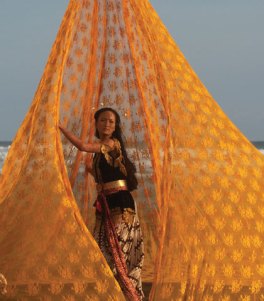 His creation is the light of human salvation that he seeks in constant contemplation. He embraces nihilism as well as gratification of the creation of God in all its paradox, in elliptical moments of blindness and finds the inter-space of thought provoking concepts that he churns out in his works to come. His is an unceasing journey that he traverses with many yet in many moments he is left alone. His work benefits the nation yet many could not comprehend. Yet he still creates as its light of creation can only be temporarily hidden. It will surface in its original form yet again. His ‘seeing’ into nature, humans and the beauty and sufferings that surrounds it becomes a trace, a map that signifies the compartmentalisation of his memory that he unleashes at its appropriate destination. His experiential journey is one of numinous in essence; a religious epiphany.

His creation from light is mechanical as well as transcendental. There is no separation from the projected light on the screen with the projected light of God in his intuitive state of creation. He is as he is, experiencing the beingness in object and subject as themselves in themselves. This is the affirmation of the photo-poet that ties in with the pure cinema of Andre Bazin, the transcendental films by Jarman, the poetic exclamation of Tarkovsky as the High in art. The creation from Light is an essential tool of the photo-poet in that he is able to traject into worlds beyond the screen itself, He sees creation in its crystalline form, not in separation but in unison. It is to him a singular creation. His creation is not a mere cinematographical mode but is in unison with its mode of comprehension, in stillness and in shot to shot, the picture perfect is animated into thousands of colours. This creation is an emotional creation as it is only through emotion that one can be invoked of its poetic embellishment as believed by Deren. It is in photo-poetry that creation is seen and the hidden is manifested with a vertical assessment of the real that is only a mirror of God’s creation. 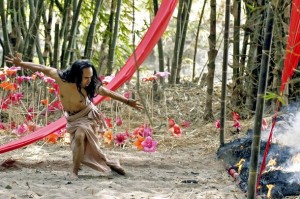 As much as Garin’s approach is towards ‘swimming against the current’, his is a race for time, the time to heal the chronic ailments of his devoured nation, devoid of at times freedom and expression, devoid of even life and salvation. The time he creates is a tribute to his microcosmic meditations upon the small islands, the uncultured ethnics and those that are the product of development that have become inner wastelands. His is a time that he sculpted into lenses that has its eye on the world, the world of Garin. His is the time sculpted in an ‘open language’ that allows personal discourse, a kind of confessions within as to the reality that is before him. This is a language that is silent yet speaks louder than is perceived. Time becomes the dream that Garin projects his fears and hopes of human salvation, in the face of oppression. Time is a mode of freedom in creativity for Garin as his senses manifolds beyond reason to sculpt the poetic reasoning he aspires to achieve.

There is an internal rhythm that is seen to be poetic in Garin’s films. This internal rhythm becomes the montages without mechanical cutting. This is the multi-faceted emotions invoked in just one shot that provides Garin the time-pressure he needs to create a kind of implosion that through this internal rhythm, an infinity is felt, those that has blackened the soul of his nation. His time is meta-cinematic in that it shows paradox of moments in cultures, beliefs and hopes intertwining those of different continents in a diegetic time, in one time-line, as an oneness in time. Time through Garin is an expression of the image that has developed into a life of its own, outside the screen that binds it. Time is not in separation but in unity to the existence that surrounds it. This is Garin’s ‘crystals of time’ that binds the virtual as well as the real, a progression of images to the image in itself. He becomes the nation’s voice, those that are not merely political with a touch of socialism but is pregnant with the struggle of the human spirit. He, in ascension is able to create his own world, a world that is as real as the historical, the documentaries and the hyper-realist films he has constructed. His world is his own, devoid of any interference. His world is his art that is transcendental with man as central to his subject. He invokes life as if it’s a labyrinth, an infinite journey that he is conscious of its ups and downs, the fall and the rise. He understands completely the energy that poetry evokes, that it is an energy which does not only perfect a good world but also comments desperately on a bad world, enclosed and oppressive.

Garin the photo-poet is experiencing a sense of bewilderment as to the beauty that he has seen in his photo-poetry. It bewildered him in a sense that the beauty exist in a simultaneous experience of the most complex, contradictory, sometimes even mutually exclusive feelings…that he sees in the poetic images he has created. He sees beauty in the tiniest of the photogrammes, into the light that projects the inanimate into the animate and feels the story unfold even outside of the screen that surrounds it and into the life he leads. He sees beauty in truths found in the child, the oppressed and the prisoners. He sees beauty as an affinity that he could not dismantle, those of his own nation and the thousands of island with multi-ethnic origins that he touches and composes of even if it is a brief moment in time. There is a desire for him to communicate these feelings for it is unbearably beautiful, aesthetically fulfilling that he rejoices it in the images that he created. He celebrates nature and the blending of the human with it. He projects rituals as a form of cleansing, a mode that each unique culture beautifully subscribes to. 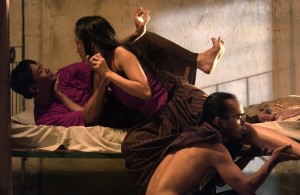 In all of these he believes of this vertical assessment he abides to that ascends in great humility of the beauty that engulfs it. The truth comes from his art that speaks in singular succession as an expression of the meaning of existence. Through ellipsis and ambiguity, he proceeds into beauty for only in blindness can we see light. The photo-poet embraces the opposites as an eternal connection that makes his creation a complete whole. Meditations upon beauty in the photo-poet’s heart are truthful to both its beauty and its dirt. Beauty in the singularity the photo-poet affirms only attest to the awareness for his need to love and to give his love, and aware that beauty is summoning him.

First written by Maszalida Hamzah in the Malaysian Cinema mail list. Reposted here with kind permission from the kind author, who, incidentally, also introduced Fikri to the joys of teh o suey laichee (hot tea with lychee. It really is wonderful 🙂 ).

3 thoughts on “Garin Nugroho the Photo-poet – A Rendering”