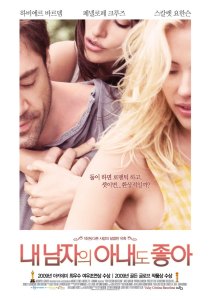 He walked over to them…sauntered, more like it. His smile, ever so slight, is engaging, cheery, and yet hides an intent that is not so pure, though sincere in its nature. Vicky and Cristina both looked as they feel: taken aback, but more than just a little intrigued by him. Cristina, especially, felt her heart beat just that little bit faster as he reaches their table.

“American?” he started, guessing their nationality. Within three minutes, he had their attention, and did not waste any time. Vicky, however, wasn’t very impressed as he invited them to Oviedo. “I’ll show you around the city, and we’ll eat well. We’ll drink good wine. We’ll make love.” “Yeah,” Vicky asked sarcastically, “who exactly is going to make love?” “Hopefully, the three of us,” came the confident reply.

In a nutshell, then, the exchange above perfectly encapsulates the entire film: direct, confident, and without much time to waste. This applies to pretty much all aspects of the film. Perhaps I am getting a little ahead of myself, but I am incredibly to start off with that.

Woody Allen’s fourth consecutive film made outside of the United States (well, everyone else said the same thing) sees him casting his lenses at Barcelona, who, as I write this, had just knocked Chelsea out of the Champions League, and will meet my beloved Devils for what should be a titanic tussle in Rome. Unfortunately, Mr Allen is not quite making a film about the Blaugrana, but is merely setting his narrative in the scenic city.

We follow Vicky (Rebecca Hall) and Cristina (Scarlett Johansson), who’s become something of a muse for Allen) as they visit Barcelona for the holidays. Vicky is engaged to be married to Doug (Chris Messina), a dedicated career man who is committed to her. On the other hand, Cristina, who despises the ‘boringness’ of Vicky’s relationship, is a little more spontaneous, but at the same time, doesn’t really know what she wants. Willing to float from one point to another, it is at this juncture that she meets Juan Antonio (Javier Bardem). Though she is more agreeable with Juan Antonio, Vicky, not quite trusting him, is not. This is where the aforementioned-dialogue took place.

However, things are not quite as straightforward as it seems. While the triumvirate of Vicky, Cristina and Juan Antonio takes a few twists and turns in their friendship, they positively got thrown off the road and into the canyon when Maria Elena (Penelope Cruz), Juan Antonio’s former wife, turns up once again in his life. She had attempted to commit suicide, and Juan Antonio, still caring for her despite what she did to him, decided to care for her until she is better. Into the mix, we also have Doug flying in to Barcelona, and you can see the kind of treat that we’re into.

But what was it that Maria Elena did to Juan Antonio? “I was in love with a most incredible woman…and then in the end…” “Yes?” “She put a knife into me.” I couldn’t help but laugh out loud at that part, and I wonder whether you’ll be able to do the same just by reading this review. Nevertheless, I hope you understand what it is that I am trying to get at. The film is fun and enjoyable to watch, not just for the scenery and script (originally set in San Francisco, apparently), but also for the cast. They all delivered with great comic timing.

And while Penelope gets most of the plaudits and awards for her portrayal of the slightly-off center Maria Elena, kudos should also be given to Javier Bardem, who absolutely bowled me over here. I’ve seen him in other films as well, of course, and most people would remember his iconic turn as Chigurh. I was also intrigued by his turn as a bed-bound dying man who wanted to euthanise himself in ‘The Sea Inside’ (which I saw at FINAS, funnily enough). But here, he is something of a revelation. His character, essentially that of a playboy, should really be this likeable, but it is. I am not sure what exactly is the secret ingredient Perhaps it is the way he smiles with his eyes, something that is subtle but mischievous, or maybe it is simply his sincerity and honesty that is just so hard to live with. He also has a fantastic way of turning things around. For example, when Cristina informs him that Vicky is engaged, instead of being turned off, he is positively excited. “Great. Then these are her last days of freedom.” Vicky, however, doesn’t really buy it. “You’re trying to lose yourself in empty sex.” “Empty sex?” he replied quizzically. “Do you have such a low opinion of yourself?” She couldn’t really say much to respond to that.

Of course, actors can only work with the lines that they are given. In this case, we should be thankful that Woody Allen is hitting top form. I’ve seen a fair amount of his films (you can’t really escape them, he’s practically a storytelling-machine!). Though I’ve enjoyed them all (‘Hannah and Her Sisters’ was a riot), this is by far the one that I enjoyed the most. They’re all slightly weird and quirky in their own ways, and this one is no different. The narrator, in other movies, might have gotten in the way of the storytelling, but here he is used effectively as a tool, rather than a crutch, to enhance the emotions of a scene. Witness the moments when Vicky hears a Spanish guitar. My Monash lecturer, Dr Sharon Bong, might have told Woody Allen to show rather than tell, but thank God Woody Allen did both.

Helped along by a wonderful cast (though I think Rebecca Hall should probably have had a more prominent place on the poster, given that she is Vicky, after all), a wonderful setting, beautiful music (though sometimes the main theme becomes a little overplayed, but it’s cute enough)…this is just a very nice and neat little movie that everyone can watch and enjoy. From the looks of it, the people who made it and were a part of it seems to be very comfortable in their own skins as well, which shows up positively. And there’s a little ‘scene’ between Scarlett Johansson and Penelope Cruz, to boot.

What else could you want from a film?

For days and days after that, Fikri couldn’t get the theme out of his head.

One thought on “Nice and Neat – Vicky Cristina Barcelona”