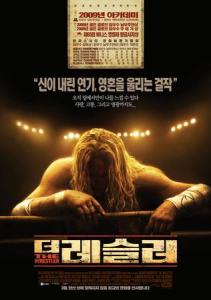 What a departure it is from Darren Arofnosky’s previous films. The slick and insane editing of ‘Requiem for a Dream’, the vision of ‘The Fountain’…if anything, the film goes right back to the very roots of his career, with the eventual vision matching that of his breakout feature film, ‘Pi’. That wasn’t a very pleasant film to watch, but I mean pleasant to include the roughness of the actual end product, which was intended and added much to the film. The same thing happened here, and while some parts were difficult to watch, mainly figuratively and almost literally at times, I appreciated the director’s effort to show the reality (or perceived reality) of a broken down professional wrestler.

After all, what usually happens is not something is a pretty thing to watch, and the end product should not end up looking as something that comes even close to the weekly offerings that World Wrestling Entertainment put on.

There is, however, a certain sense of satisfaction that comes from watching this film, and it is a pleasure that I must say doesn’t come from the film itself. Rather, before I get on with the rest of the review, it is derived from the fact that a serious film has been made about what professional wrestling is all about. That’s not to say that everyone leads the same sort of fragility (emotional, financial, or otherwise) that the main character, Randy ‘The Ram’ Robinson (Mickey Rourke), has. Rather, the film has served to pull back the curtain and show, to a certain extent, of the sacrifices and the privileges that exists in professional wrestling, for better or for worse. As a big fan of professional wrestling myself, I am glad; at least now the casual viewer will have a better opportunity to make more informed judgments about the profession.

Before I bang on too much about that, however, it’s best to get the synopsis out of the way, so that you will have a better inkling of what I’m banging on about. We start off by following Randy picking up his cheque for another night of wrestling well done. However, this is not the Madison Square Garden, but what appears to be a kindergarten or a school room of some sort (for some reason, I can’t recall the location exactly). The Ram used to be a major star, but now can’t even make enough ends meet to pay his rent. It doesn’t exactly help one’s self-esteem when your day-job manager doesn’t look kindly upon your part-time, independent endeavour, either. “You want weekend shifts?” he asked, smirking. “Isn’t that when you get on top of other men?”

In between all these humiliations, he finds salvation in a blooming friendship/romance with a stripper, Pam, with the stage name of Cassidy (Marissa Tomei). They have more than just their friendship in common, with Cassidy’s popularity also waning because of her age. One scene sees Randy ramming in and practically throwing out a bunch of customer for insulting her due to her age. She persuades him to try and mend his relationship with his daughter, Stephanie (Evan Rachel Wood). He had pretty much ignored her since birth, but decided to give it another go nonetheless. It is in these moments between the two of them that The Ram poured everything out. “I’m the one who was supposed to take care of everything…and I left. I left you,” he sobbed. “And now, I am an old, broken down piece of meat…and I’m alone. And I deserve to be all alone. I just don’t want you to hate me.” Try not bawling your heart out at that. I certainly failed.

However, at the core of all this lies Randy’s unquenchable thirst for the spotlight. In this case, he just can’t stop wrestling. Driving the main narrative is his rematch with the Ayatollah (Ernest bloody Miller! I used to watch him in his WCW days, he looked so bloody different!). They had a heated rivalry back in the 80s, and the chance at a rematch was something that he couldn’t pass up on. Even after suffering from a heart attack after a brutal match, this remained one of, if not the biggest of his motivations.

It sounds obvious enough, with a fair amount of plot twists and turns that can be predicted with relative ease, as well as cardboard characters that could have been lifted from almost any other movie of similar type. Broken down sports star in the last chance saloon? Estranged personal relationships with others? You feel like you’ve seen them all before, but certainly not like this. Much has been made of the performance of the cast, with Mickey Rourke predictably taking the center stage. I can have no complaints with this, since the role is one that is challenging on both the mind and the body. While Marissa Tomei was also impressive, hers is not a role that truly stretched her, so to speak. In the film’s development, Rourke spent much time and effort to make this role his own, so much so that even the thought of Nicolas Cage, apparently the preferred choice to begin with, was ludicrous. Not that I can sympathise with the character all that much; without giving too much of the plot away, I felt that he had chances to really make things work, but didn’t hold on to them hard enough.

One other thing that I liked about the film is the parallels that Darren Aronofsky draw between wrestling a couple of other scenes. The first is Randy’s walk from the backroom to the meat selling area. At this time, he had just put on his uniform, and as he made his way throughout the backarea, the sounds of a crowd at a wrestling match rises with almost every step. He stops just before stepping forward, taking a deep breath. This mirrors the routine that most performers goes through before a match, and one that was film in one of the earlier scenes. Read into that what you will. Far more subtle (and perhaps unintentional, perhaps it is) is the parralells between not only Randy and Cassidy, but also between wrestling and stripping. Both are not well-looked upon by the masses, and both required the performers to put their body on the line in different ways. Nevertheless, how good a job they did depended on how satisfied the customers and audience members are. And, within the context of the film at least, it’s not as if both professions are bringing in the big bucks.

In that regard, then, I feel that the biggest winner from this film is not Mickey Rourke himself, nor Darren Aronofsky after the perceived failure of ‘The Fountain’ (though I personally enjoyed it a lot; an incredibly beautiful film). Everyone else also did well, though Evan Rachel Wood’s scenes were a bit too sparse for my liking, but they made an impact. So did Marissa Tomei, who managed to look the part. No, the biggest winner for me is professional wrestling itself. Not the main stars like John Cena or Batista, for they represent only the cream of the crop on top of a very large cake. The film, then, paid plenty of tribute to the past and to the present, even; not all professional wrestlers rake in the big bucks. What the film has managed to do for me is to offer yet another, even more dramatic perspective on what professional wrestlers go through in order to make it to the top. In this case, to re-make it to the top, and that is a journey that a lot of the audience members can always identify with strongly.

Hopefully, what they also get from the film is a form of respect for the sport itself. It has been derided by many for so many years as fake; I hope that this film can make them rethink that particular notion “Are you cool with staples?” asked Randy’s opponent, Necro Butcher, before their match. “Staples?” came the hesitant reply. “Staple gun…not so bad on the way in, except it’s a little scary, you know – you got this metal thing pressed up against you. Gonna leave some marks, have to deal with a little blood loss.”

For me, it is not real. It is almost never real. But fake? Never.

And if you watch this film, you might be able to better understand the fine difference between the two.

Fikri loved the heat between Chris Jericho and Mickey Rourke. He first wrote about the film here before its release.

One thought on “Smackdown! – The Wrestler”