In watching this film, Fikri Jermadi realise you need to put different hats on to really enjoy it.

There can be such a thing as bad timing. That sounds obvious, of course, but at times stating the obvious is a need to be done. There can be, for example, the finding of a solution of a question yet to be asked. There can be the exhibition of mastery to an audience sanitised by it. More to the point, facts and figures, 1s and 0s, statistics and numbers are often used to justify such events. Perfectly relevant, of course, for a world driven more empirical by American influence, for it is they who pretty much pioneered the popularity of such numbers in analysing media audience retention, levels of sporting excellence, and, in this specific case, box office figures.

For if ever a gun was pointed at my head, I would say that ‘Blackhat’ belongs in the category of a somewhat misunderstood film. It certainly is an accomplished one on many levels, though there are also plenty of holes worth poking our fingers through. Nevertheless, the pure numbers as we understand it paints this easily digestible, black-and-white picture for us: ‘Blackhat’ is and probably will continue to be one of the biggest flops in the careers of its makers.

It’s not difficult to see where that’s coming from. A film that cost over $70 million garnering a mere $4.4 million in its opening weekend in the United States is not one to crow home about. Context is required, though, for that same weekend also bequeathed to us ‘American Sniper’ and ‘Taken 3’. One was a surprise box office juggernaut, while the other was the final instalment of a groundbreaking, genre-reviving franchise. They both played to what was essentially the same demographic, fighting for an audience wanting a piece of the great white American hero.

Not that all heroes are the same. ‘Blackhat’ presents Nicholas Hathaway (Chris Hemsworth), a high level hacker jailed by the United States government for previous misdemeanours. He is set free for now, though, because they need his help. Another hacker had hacked into a nuclear plant, causing it to explode. The man tasked with solving the case is Captain Chen Dawai (Wang Leehom), a cyber security expert from, of and for China. Usefully, he was also Hathaway’s college roommate. Explaining that the hacker had used code they written together back in school, he managed to pull strings and get Hathaway on board to solve this case. Together with FBI agent Carol Barrett (Viola Davis) and Dawai’s sister Lien (Tang Wei), the group set off on an international journey to track down the perpetrator.

That’s essentially it. Truth be told, the story probably doesn’t sound all that enticing to the casual viewer. ‘Blackhat’ (a term used to describe hackers) is promoted as an action film that is essentially devoid of it. Rather, much of the villainy (and the efforts to track it down) is virtual, played out as much in cyberspace as in real life. Even the efforts to find him requires the usage of brainpower, which, stopping short of cutting open Chris Hemsworth’s head and sticking the camera near it, is also played out on plains not seen plainly. The real, though, still needs to assert itself, for as much as bad hackers can get away with blowing up power plants at the push of a button, human thirst for vengeance, revenge and justice (the American way) is not easily satisfied by enacting the same on the perpetrator.

I myself was more attracted to the fact that Michael Mann directed the film. He is a courageous filmmaker, someone who had made strong, adult material in the past. By adult I do not mean pornographic, but mature. Quite frankly, his films feature men and women, with an especial bias towards the male perspective. Check out the conversations between the characters of Tom Cruise and Jamie Foxx in ‘Collateral’, for example. One is a humble taxi driver, another is a ruthless killer. Yet there they are, men dealing with their own demons in their ways. The same goes to ‘Heat’, whose much vaunted Robert De Niro-Al Pacino relationship was gold (even though it was brief to behold). It’s essentially the kind of stuff I wish I could make (and did try).

Speaking of actors, the cast was a bit left-field in terms of its selection. You have on the one hand the world’s largest continent represented by Wang Leehom and Tang Wei. The cynical side of me can’t help but feel that their selection is a bit of a nod towards exploiting the Chinese box office market. The brighter and cheerier side, though, is happy to see two very talented performers be given a chance to crack Hollywood. Perhaps I am misjudging the situation here, but these were the first and lasting thoughts in my head.

The main man on the poster, though, is Chris Hemsworth. Again, this is an issue of timing: in and of itself, casting a man who had led the charge on many of the most profitable Marvel films seemed like a decent business proposition. Perhaps outside of them his box office track record is a little more questionable, but it’s worth a calculated punt all the same. The fact that he was selected as People’s Sexiest Man Alive, though, was a stick used to beat this film with. People wondered why the hot bod left playing the role of a hacker, without truly understanding that the film itself was wrapped many unaligned moons prior to its release.

If anything, what they did expect was illogically included in the film. As much as the film dealt with the unseen, there was enough of the physical to sate action film fans, even if it did not really merit an appearance in the way it did. For example, Hathaway displayed a strong aptitude for firearms one would not associate with computer hackers. It’s an aspect of the story that I wish would have been expanded upon, but this is an example of how an illogical part of the story should have actually played to gallery, if only more of it were present during its screening to appreciate it.

Perhaps they were turned off by the orientalism on display? By this I refer to Hathaway’s budding romance with Lien that developed through the film. While there were moments in which seeds were planted with furtive glances here and there, the fact is their sudden elevation from awkward colleagues to fantastic bed partners was a little too immediate for my liking. Again, if we are to look at Mann’s track record, he has a previous, for the same occurred in ‘Miami Vice’ between Gong Li and Colin Farrell. Perhaps this is how real men do it.

To my mind, though, the only thing it really did was to weaken the so-called strong character of Lien in the film: she was initially portrayed as being independent and capable, but put her in the arms of the conquering white guy with plenty of time on their hands, and off she goes. What made this an even bigger storytelling crime was how nonchalant the whole thing was developed, for their romance did not really add as much as I thought they would have to the higher stakes near the film’s end. By that I mean it would have been equally tense even if they were mere colleagues who worked together, friends even. 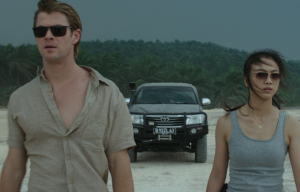 That is, of course, if you managed to get through to the end. I must admit that the camerawork was typical of Mann, with a lot of energy pumping through its frames. The frantic editing also contributed to this. I just about managed to keep track, but I have to be honest here: one of the other main reasons that drove me through was because it was shot in Malaysia. Back when it was titled ‘Cyber’, it caused a bit of a stir that Michael Mann would shoot a film starring Thor himself in the country.

It took advantage of a generous tax rebate system, but the end result of that (apart from a couple of blurry pictures of Chris Hemsworth at Subang Airport sent through Whatsapp by one of my former students) is a single scene that is actually set in the country. Some of the others may have been shot in Malaysia, but perhaps in the story they were set in Indonesia. In fact, there’s more of Indonesia in the film that Malaysia itself, so for those who’s keeping score, this is one more reason for Indonesians to celebrate, in addition to their countrymen cast in ‘Fast & Furious 6’, ‘Star Wars: The Force Awakens’ and ‘Captain America: Civil War’; we Malaysians have to get into a time machine to get back to Michelle Yeoh’s glory years.

All jokes aside, I really did wish that things were different. The premise was unique (you don’t really get that many hacker movies these days), and the international cast and venues made for an interesting mix. Add in a visionary filmmaker like Michael Mann, and this should have been hit closer to ‘Collateral’ or ‘Miami Vice’ territory.

Instead, the final picture is a different one. At the end of the film, the screen went black and the credits started rolling. As the lights in the cinema hall came back on, I turned to my mother, with whom I had watched the film. Her eyes were closed, off in a dreamland somewhere that probably did not involve watching midnight screenings of Michael Mann films.

It has been a while since Fikri wore his black hat.