Every portrait that is painted with feeling is a portrait of the artist, not of the sitter – Oscar Wilde

U-Wei Haji Saari’s ‘Hanyut’ (also known as ‘Almayer’s Folly’) begins with an image of a Chinese man who appears to be an opium smoker. But it is a red herring. Opium smokers are thin with sunken cheeks, and lie supine. This man, however, looks well-fed and appears to be in charge (Mamat Khalid also had a Chinese opium smoker in his parodic film, ‘Kala Malam Bulan Mengambang’). This scene in ‘Hanyut’ is actually part of the last scene in the film, where we see the Chinese man leaving Almayer’s house. Almayer (Peter O’Brien), is then shown lying on the floor, with an opium pipe beside him. He is gaunt, obviously brought about by opium smoking, and provided by the Chinese man. With unblinking eyes and an expressionless face, Almayer stares straight ahead and mumbles: “I cannot forget…”

As in all of U-Wei’s films, there will be lines of dialogue like this. Like Shakespeare’s lines, which uses simple words but are pregnant with subtext, U-Wei’s words draw attention to the subtext of his films. What is it, then, that Almayer cannot forget? Is it the unfinished house that he himself finally sets fire to? Or is it that mountain of gold he was searching for? He had devoted twenty years of his life to that quest, and he will not leave. Almayer vehemently emphasises this at dinner with the British officers at his house: “I cannot leave this infernal place. I have been trying to leave for twenty years. I will never get out.” He does not say “cannot”, but “will never”. What is it, then, that is holding him back?

The opening and closing scenes in ‘Hanyut’ are significant as subtexts in the context of Malaysian cinema. It is the background story, one that is hidden and needs to be interpreted in light of the history of Malay cinema (not Malaysian cinema). Many films begin and end with the same scene. It becomes a signifier – that nothing has changed, and the cycle goes on. U-Wei’s earlier film, ‘Jogho’, also began with an untended paddy field, and ended with the same field, still untended. Nothing has changed, and life goes on as it has for centuries. The landscape functions as a mindscape of the inhabitants and their habitat. It is U-Wei’s observation of the fate of his race, his nation, and the profession that he has embraced. He will not put it all behind him because he has not forgotten – as in Mem’s words to her daughter, Nina (Diana Danielle): “This country gave birth to me. I am Malay. You are Malay.”

One cannot argue with that… 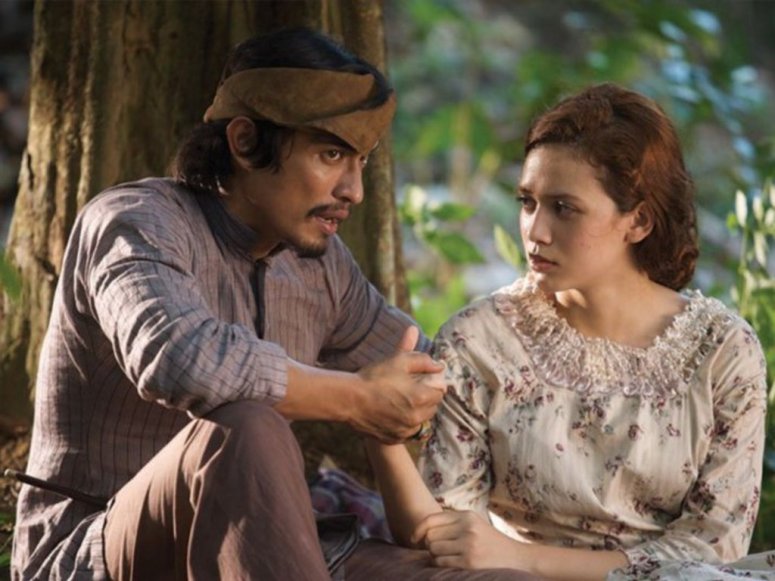 The story continues with Nina being forcibly taken away from Mem (Sofia Jane) by Almayer, to be sent to England to become ‘a lady’. Mem now has hatred and a desire for revenge on Almayer. Almayer, being a European, does not understand this particular trait in the Malay race. Like the characters in U-Wei’s first film, ‘Isteri, Perempuan dan …’, this is what drives the story of ‘Hanyut’, drawing other characters into its web, and it is what builds up to the inevitable climax. History simply repeats itself. It is characters like these that brought down the Melaka sultanate in the 15th century. Jealous ministers and opportunists like Raja Mudaliar and his minion, Kitul anak Patul, recur throughout time. The final scene in ‘Isteri, Perempuan dan …’ also echoes the story of Hang Tuah, where brother is pitted against brother. The cycle becomes repeated.

The story of ‘Hanyut’ carries on with the birth of a baby, as Nina coincidentally returns ten years later. The birth appears to signal a new beginning, but it is not meant to be. In Dain Maroola (Adi Putra), Mem sees the opportunity to exact revenge on Almayer. And so she, unknowingly, sets into motion events that will end in tragedy for her husband.

The tragedy, in fact, is presented by U-Wei in dramatic irony. Almayer sincerely has his daughter’s happiness and future in his sights, and he does it all based on his own culture, one that is very different from the culture of the Malays where there is a lot of intrigue and power play. Almayer rejects an Arab’s marriage proposal, and provides a logical explanation for it. But even the Arab (Bront Palarae), is like the Malays, becoming offended and emotional. Mem, Almayer’s wife, pretends to be like Almayer, but is enamoured and carried away by the jewellery offered by Dain. Nina, caught in between, is confused but ultimately, her love for Dain takes over, and she ends up rejecting her own father, unable to comprehend that Almayer actually has her best interests at heart.

U-Wei introduces other characters who add insult to injury. Among them are the lackadaisical and brainless Sultan (El Manik), with his sycophantic right hand man, Orang Kaya Tinggi (Khalid Salleh). The Sultan cooperates with the British. Like old Melaka’s Raja Mudaliar, Orang Kaya Tinggi sees his opportunity and spreads calumny against Almayer. Tarminah (Rahayu Saraswati), the kueh-selling village girl, is in love with Dain. When she finds out that Dain is going to run off with Nina, her jealousy and anger contributes to the inevitable. She spies on Nina and Mem, and then tells Almayer that Mem is behind the plot to fool the British by claiming that Dain has died by drowning. 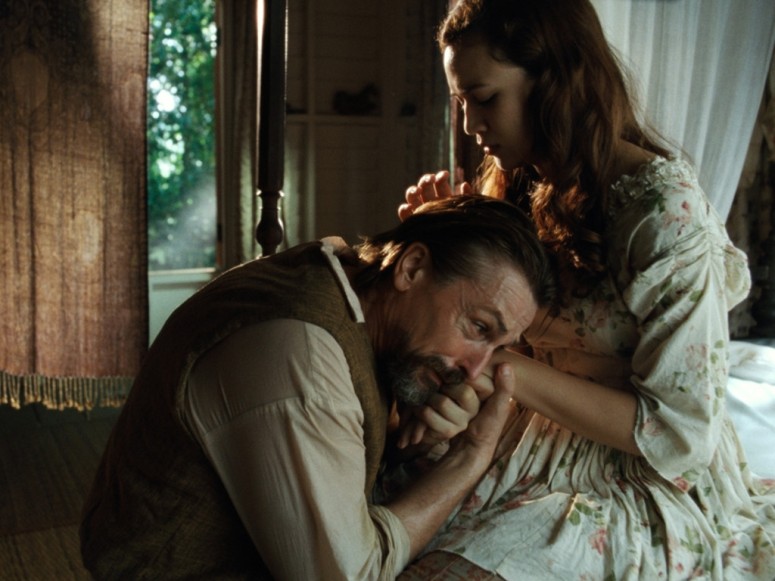 U-Wei depicts Almayer as a man of vision. He is progressive, in contrast to the Malays around him and the British, whose main aim is only to consolidate their power. He has begun to build a house. It is not finished, and he will finish it himself without any help from the Malays once he finds the gold that he is looking for.  However, when his daughter makes the decision to leave him and go with Dain, his whole world collapses. All the more so when Dain confidently tells him that “Nina is now Malay.” Unlike Mem, Almayer’s desire for gold was all for Nina, so that she could marry a European and live a happy life away from the decadent ‘savages’ that he has been around with for twenty years.

Federico Fellini said that all art is autobiographical, and he has demonstrated that in his films. Oscar Wilde’s comment that every portrait painted, in reality, is a portrait of the artist himself, can also be applied to the works of many filmmakers. Since the 1980s, many Malaysian filmmakers – in particular those trained overseas and exposed to great literature – have made films that are, in fact, about their own involvement in the film industry. U-Wei is no different. To understand the background story of ‘Hanyut’, one needs to decipher the character roles and events depicted. They become pointers as to what is U-Wei’s subject matter and what he is really saying in ‘Hanyut’.

The story of ‘Hanyut’ as presented on the screen is very easy to follow. However, its meaning is indeed very complex, and needs to be deciphered. How then shall we decipher the meaning of ‘Hanyut’ vis-a-vis its opening and closing scenes? U-Wei’s directorial statement is as follows:

“‘Hanyut’ is a story about a cosmopolitan society living and working together along a riverbank somewhere in Malaysia. It attracted many sea travelers seeking opportunity and rewards. It gives us a window into the Malay society in Malaysia in the late 19th century: a highly competitive mix of indigenous Malays, tribal aborigines, Europeans, Arabs, Indians and Chinese living and working together. Although the book starts out as though it is from the perspective of the European protagonist, the narrative is dynamic. By the end of the story the protagonist (and the audience) discover the understanding of his own insignificance. In the beginning of the story Almayer appears to be at the centre of society, but in the end we see that he is very much peripheral and alienated, and that the real cultural, political and economic life of the community is located elsewhere and involves other people besides himself.”

I much prefer U-Wei’s dictionary meaning of the word ‘hanyut’ that appears at the end of the film:

Drifting off into ominous peril, without
any real way of getting back.

Perhaps ‘Hanyut’ is a huge portrait of U-Wei himself, and the people and the milieu he has to contend with, one that has taken him twenty years to finally ‘paint’. And perhaps, U-Wei is still waiting to discover that ‘mountain of gold’, which has been eluding him as a film storyteller, and – like Almayer – he cannot leave the scene without having achieved that goal. Perhaps he feels that he is now adrift, but has come accept that fact because there is no way back.

But for Malay cinema, ‘Hanyut’, which finally has come to fruition after almost two decades, is like a ‘mountain of gold’ that has been longed for, one that can be called an authentic Malay cinema, even if it has been largely brought to the screen by many foreigners, both in its cast and crew. Perhaps that is the irony of the Malays: that they can only discover themselves – like Almayer – when they come into contact with the Other.

Hassan Muthalib is a noted Malaysian writer, activist and historian. Find out more of his writings here. Previously, we reviewed his book ‘Malaysian Cinema In A Bottle’.