With the New York Asian Film Festival about to kick off, Tang Mei San recalls her experience of watching ‘The Whistleblower’ a number of years ago.

My choice of Korean cinema at the 2014 New York Asian Film Festival (NYAFF) was ‘The Whistleblower’ by Yim Soon-rye, one of South Korea’s few female directors. The screening was followed by a Q&A session with director Yim herself, alongside her two producers, Lee Choon-yeon and Nam Jung-il.

‘The Whistleblower’, while fictionalised, follows closely the actual events behind the scientific fraud conducted by infamous stem cell researcher Dr. Hwang Woo-suk and his research team of Seoul National University (SNU) almost ten years ago. Dr. Hwang was then considered a South Korean national hero, following his claimed success in being able to clone stem cells from human embryo. Nevertheless, both his published works in the prestigious journal ‘Science’ were subsequently retracted and his cloning research was deemed fraudulent by an SNU investigation. He was eventually charged by South Korean court for embezzlement and bioethics violation in 2009. ‘The Whistleblower’ details the process of bringing Dr. Hwang to trial.

The film opens with investigative journalist Yoon Min-cheol (Park Hae-il) in the home of a widower, who tries to convince Yoon that the incidents leading to his wife’s death should be investigated by PD Chase, the television program produced by Yoon. Dismissing the story as full of loopholes, Yoon is ready to leave before having his mind changed when the man drops a strong hint that his wife’s death was most likely due to an illegal oocyte donation procedure that was performed at Newman Medical, a fertility clinic closely associated to Dr. Lee Jang-hwan (the fictionalised character of Dr. Hwang, played by Lee Geung-young), the famous stem cell researcher, who is also hailed as a national hero for being able to clone stem cells from human embryos.

The result is a fast-paced opening, as we see Yoon in close pursuit of the dubious fertility clinic, despite being told by his team leader to drop the case. Given Lee’s status of being a national hero, any revelations to suggest that he is anything less would never sit well with the executives of the station. Nevertheless, Yoon persists and finally get in touch with a former senior scientist in Dr. Lee’s research team. He sets up a clandestine meeting with Shim Min-ho (Yoo Yeon-seok), a physician-scientist who is now struggling to make ends meet after quitting from Dr. Lee’s laboratory. Dr. Shim’s revelation is far more shocking than what Yoon has expected – not only is Lee obtaining illegal oocytes for research purpose, but the entire claim of being able to clone human stem cell has been a complete fabrication.

Guided by his belief that “truth should come first before national interest, for truth ultimately serves national interest”, Yoon struggles against all odds and is determined to reveal the story to the public. He faces challenges from both within the television network he works for and from the general public who now labels him a “national traitor”. After all, Lee’s claim of being able to treat previously incurable disease through cloned stem cells has earned him the status of national hero, which comes with a huge supporter base and easy access to the media to manipulate public sentiments.

We see many instances of journalism ethics being questioned here – who has the ultimate decision to editorial contents and why? The cinematic experience of the thrill and suspense here is also heightened by Lee Jun-oh’s music, as evident by the fact that some among the audience were clapping during the screening, in support of Yoon’s determination. This was a phenomenon that seemed to have repeated itself whether the film was shown in Beijing or New York, as noted by one of the film festival organizers.

“When I first thought about this story, I had many possibilities of how to tell it. I thought I could tell it from a very scientific perspective, detailing the technicalities of how stem cell research could be manipulated and fabricated. But I eventually decided that I want to tell it from the perspective of how a determined journalist fought to get the truth out there,” said the director, when asked about her motivation behind this film. “I have tried to remain as accurate as possible to the actual chain of events. In fact, the actual incidents themselves felt so much more scandalous to me, so much that I felt I have to tone them down for my film. Only two aspects of this film are completely fictionalised – that the whistleblower has a daughter with terminal illness and the cloned dog developed cancer.” 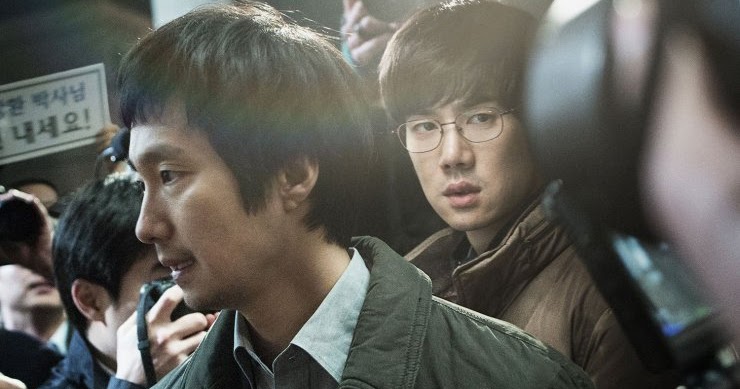 As I watched the film as both a scientist by trade and a keen observer of Korean cinema by hobby, two things struck me. Firstly, it is the depiction of Korean nationalism in this film and how public sentiments among the South Korean society is so easily manipulated and polarised by just a few key social figures. The story is a departure from the dominating genres of tear-jerkers and revenge-themed sleek action films that have somewhat come to symbolise South Korean box-office success in recent years. The additional perspectives it offers are nonetheless refreshing.

The other question that I have thought a lot about was the motivation behind Dr. Lee’s acts of scientific fraud. Was it simply motivated by a lust for fame and prestige, or was he simply a product of the highly competitive society and as the character himself said in the film, “that I have gone too far and have missed the opportunity to stop”? I think this is not something clearly demonstrated in the film, but perhaps that is the whole point – that even Dr. Lee himself is not sure why he committed fraud. He is simply a product of the circumstances that he was placed in. “I want to highlight the point that no one is a complete hero or a complete villain”, said Yim, when asked by someone from the audience on the reason behind the sympathetic portrayal of Dr. Hwang Woo Suk’s fictionalised character.

For those who are interested, Dr. Hwang in real life has recently made a quiet but seemingly determined comeback, even when others in the field remain skeptical of him. The actual whistleblower, Dr. Ryu Young-joon, completed a doctorate in bioethics in 2011 and is now pursuing a second doctorate in animal reproductive biology. Despite having gone through much tribulation following what he did, Dr. Ryu said he had no regrets and remained faithful about science.