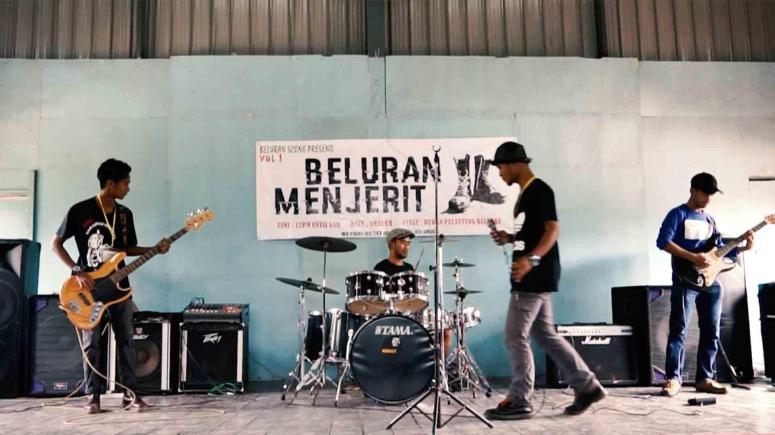 In watching ‘Beluran Menjerit’, I was intrigued by the idea of skinheads in Malaysia getting together to organise their first ever gig in Beluran, Sabah. Just reading the synopsis alone is enough to get the juices flowing, for we’re talking about so many different potential conflicts presented in one: the old versus the new, the conservative matched against the liberal, the West facing off against the East. That latter statement can be read as an external and internal discussion; though globally there exist an east-west dichotomy enunciated through the relatively-foreign musical genre of rock (in this film), there is also another, more political layer of meaning to be made within a Malaysian sense, one that is not often constructively conversed about.

Representations of those from East Malaysia, from Sabah and Sarawak, have often been characterised and simplified, lacking a proper and more informed discourse. Though there is a rise in the critical considerations of such representations over the past few years, the fact remains that films dealing with the identity of our brothers and sisters in Borneo in an enlightening sense remain as far away as Sandakan is from Kuala Lumpur. It doesn’t help that many of the films that did feature this works largely from a Peninsular Malaysian perspective, a form of whitewashing potentially orientalising the self. That is no good for anyone.

In making that political meaning through ‘Beluran Menjerit’, much of my impression is, admittedly, preconceived based on the filmmaking team. Badrul Hisham Ismail, for instance, is a filmmaker of some repute, having made a number of short films that caught my attention over the past few years. Primary amongst them is ‘Tailor of Pertama’. Not unlike this film (whose title immediately made me think of ‘KL Menjerit’), the wordplay contained in that title caught my attention as much as it caught me off guard, suggesting a man who knows how many film beans in a row make five. In fact, a quick look through his more recent filmography indicates a relatively prolific practitioner, with many new additions I shall be watching more of soon.

Someone else who knows about these magical filmmaking beans is Nadira Ilana. An unmistakable presence on the Malaysian (independent) scene, she is not just a filmmaker in her own right, but also a forceful activist. Often speaking out on issues related to gender and identity (especially in relation to East Malaysia), rightly or wrongly she is now at a stage where I find it difficult to watch a film of hers without trying to read the underlying political motifs, especially if it is set (like ‘Beluran Menjerit’ is) in her home state of Sabah.

The format of this film’s narrative give rise to that. Slices of life in Beluran is presented, cutting back and forth from the skinheads gathering for the gig to the common townsfolk keen for their two cents to be accepted on air. With regards to the former, and contrary to how such subcultures have been presented and perceived, this is one that appears to have been firmly subsumed into the local consciousness. Dick Hebdige believes that subcultures are ideas important in their own right, expressing that which have often been sidelined by the mainstream for a variety of socio-economic reasons and purposes. What happens, then, if that very subculture does not appear to be the so-called ‘noise’ rebelling against the social static of the day? You get ‘Beluran Menjerit’, which presents a group of youths not only appearing to be apart from the apparent majority, they intriguingly seem to also be a part of that very majority itself.

These scenes alternate with a form of guided tour through the town. We are given brief history lessons, an anthropological experience rarely seen and showcased in other films. There will forever remain, of course, a divergence between real life and reel life, but ‘Beluran Menjerit’ comes close to providing a more accurate and in-depth portrayal of a place I’ve never been to and probably never will. For those who have, and perhaps even for those who may only connect through strains of cultural familiarity, this is an important piece of work, putting on screen the thoughts and considerations of a people who probably wouldn’t figure much in the mainstream consciousness of (West) Malaysians everywhere. A lady talking about the rise of the skinhead scene. Another speaking of the formation of a local band. An old man discussing the etymological roots of the word Beluran itself. That same old man being teased by his friends in the market, all who appear to be fascinated by the presence of a camera crew in town.

And then it hit me: it is not so much that the skinheads are the subculture to be looked at here; rather, the true noise potentially disrupting the hegemony comes from these citizens’ slices of life. Again, there is that risk that perhaps I am reading a little too much into what appears to be a two- or three-day documentary shoot, but I strongly doubt this film’s apolitical potential; in addition to the filmmakers mentioned above, the film is co-produced by FIXI, a publishing company founded by Amir Muhammad, himself responsible for some fairly disruptive works such as ‘The Big Durian’ and ‘The Last Communist’ back in the day.

That’s not to say that this is a perfect film, per se. There are parts that perhaps could have been trimmed a little further, though ironically I would have liked to see a longer version with more meat to the sandwich. Getting back to an earlier point, this does seem like something composed and shot within a relatively short period of time. Ignoring the fact that I am not privy to this, I would have liked to see a bit more of Beluran, more of its people, and perhaps in a more conventional sense, more of the challenges the skinheads may have faced in putting on the show. The jumping narrative structure also seemed a little more random than I would have thought, and I find myself needing at least a few seconds, at times, to ‘adjust’ to the shift in narrative. “OK, what is going on here? What is she talking about? OK, got it. Good.”

Then again, perhaps this says more about me than it does of the film. Maybe it would be more useful if I had approached this the first time with a more open mindset (the film was promoted as a filpen by Badrul Hisham Ismail, a term I often associate with fiction). All the same, it is not fair for me to castigate this for what it is not, for what it is is an important short film that remains truer to its roots than most, familiarising further that that which appears to be unfamiliar, and reminding us of the similarities that unite, rather than differences that divide.

The bigger question that no one is asking (but probably should) is whether there is an audience for a film like this. As much as I wish and hope for film audiences to approach the film appreciation experience with an open mind, heart and soul, the reality is that many may not even be aware, and will not be interested in being made aware of that which they do not know. Will such blissful ignorance, then, get in the way of a sizeable enough audience for ‘Beluran Menjerit’, lending an ear to the emotions and stories shared here, and caring for the people and characters we see on screen and feel in real life? Or is it destined to be a sermon preaching largely to the converted, to ‘scream’ into the void that is an ever-shrinking congregation?

I can take a wild guess. Can you?

You can watch the full film here.