Having discovered something interesting about the film recently, Adi Iskandar believes the time is right to share his thoughts on Leong Tuck Fai’s ‘I Love M.U.M.’.

There are a number of social media accounts that touch on Malaysian cinema on the Internet. It could be argued that one of the driving forces of this movement of enlightenment is FilemKita, an account on Twitter that is useful in providing information for an informed discourse, connecting local cinema to the outside world with little titbits of random trivia worth its weight in Bitcoin digital gold.

It is also through FilemKita that I found out about the short film, ‘I Love M.U.M.’, being refused a certificate for general release and screening in Malaysia. “The Film Censorship Board (LPF) has banned the film in 2017,” the tweet said. “The story touched on issues of discrimination in the Malaysian education system.” This stood out for me, largely because such authorities have often gone for documentaries and feature film in their crosshairs. In didn’t think that a Malaysian short film that began with children of all races singing the national anthem would be taken out, which is kind of a new low.

That’s a shame, for ‘I Love M.U.M.’ is potentially a new high of sorts. Directed by Leong Tuck Fai, it tells of Tong Sin (Amiyan Tiiong), a young lady firmly placed in the working class section. Her childhood friend is Zhe Yu (Eric Lay), the scion of a wealthier family, and it is this difference that would set the pace of this discussion. Tong Sin attends a national secondary school, a world away from the more independent education (read: Chinese) stream Zhe Yu was able to experience. Of course, love blooms between the two, a growth complicated by Zhe Yu’s father’s insistence of him furthering his studies in Taiwan; he, on the other hand, wanted to stay home and be closer to Tong Sin, particularly after she failed to gain the higher education opportunity she had worked hard for.

Those familiar with this subject matter may well wish to skip the next few paragraphs, for it is a refrain played ad infinitum almost annually. Given the make-up of the country, framed by legacies of programmes such as the New Economic Policy (which officially ended in 1991), it has fostered and festered an environment in which dissatisfaction is often attributed to communal reasons. Be it race or religion, it’s not often that you come across a country where almost every community is portrayed (either by the self or by another) as the victim.

In relation to the film, it is also not uncommon to hear of how many students of Chinese origin in Malaysia would be denied of the chance to gain either a placement at a national university, or a government scholarship to further their studies either at home or abroad, a grumbling that grows louder with every (Malay) student perceived to be inferior being granted that very opportunity. We hear this rumbling early on in the film, as a lady in the coffee shop sighs, “This problem seems to occur every year, but we are left without solutions.”

One solution sought by many is the eventual brain drain to Chinese-majority countries like Taiwan. The director made this film as a part of his studies at Shih Hsin University; a nod to this can be seen when Zhe Yu’s father, Teoh Bah Cheng (Jordan Voon), even tells his son to remind him to contact Tuck Fai in Taiwan “to find out university admission procedures.” Beyond the possibility of reading this film as a propaganda piece for Taiwan (and other such places), it also lends an autobiographical air to the proceedings: how much of this discussion did Tuck Fai himself go through?

This is a powder keg of an issue, and to a large extent I admire the chutzpah he displayed in bringing through this story. I actually feel that these are the sort of things that deserves greater and more constructive conversations in real life, given how complex they can be. It is therefore slightly disappointing to see it being presented in a one-sided manner as it is here, though I suppose limitations in the short film duration make that bit more difficult. All the same, there remains a disconnect in discourse and discussion between the different communities in this country. Ironically, ‘I Love M.U.M.’ does not help to alleviate it as much as I think it could and probably should have. Bear with me.

One accusation often thrown at Chinese school students is how they do not participate in the same nation-building processes those attending national schools do, resulting in a very separate identity. I find that echoed in the process of finding out about this film. Google ‘I Love M.U.M.’, and you’ll find nothing of this film (at least, not before I publish this). Add ‘Malaysia’ to the list of search terms, and the first result you see are links selling baby socks saying I LOVE MUM & I LOVE DAD. Throw ‘short film’ into that mix, and Viddsee’s the winner, dominating nearly all the results on that first page. We lose, however, because the only links on that page you do see of this film are the aforementioned tweets by FilemKita. Maybe this is a requirement of his course or something, but whatever it is, it is only when you type in the name of the director do we actually start to get somewhere. 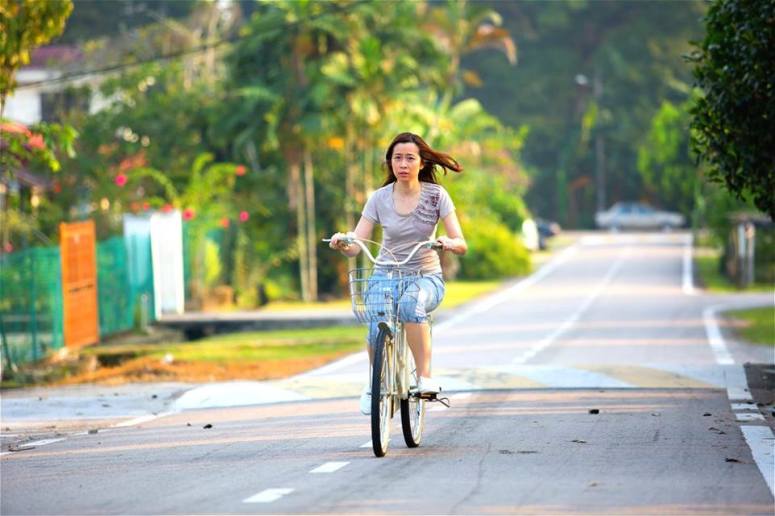 It could be argued that Tuck Fai and his team are not responsible for Google’s algorithms, which is fair. What they could have done, however, is to at the very least include Roman characters for the film’s trailer and Facebook page, currently titled only with Chinese characters (第一志願). I don’t know if Tuck Fai is deliberately making it difficult for people to find out about his film, but it does feel like those who do not have the right cultural capital will find it difficult to access. He is, of course, completely within his rights to do whatever he wants, but the end result is as disappointing and as discriminatory as the LPF ruling. I am reminded of taking my film lecturer friend, a newcomer to Malaysia, into Speedy Videos in Bangsar Village, highlighting the Malaysian films in the Bahasa Malaysia section, before moving on to the Chinese-language area. “They are Malaysian films,” I’d point to ‘Tiger Woohoo!’ and ‘Great Day’, before pushing aside the ‘Infernal Affairs’ DVD box set. “These are not.” This is one of the little things I feel could be worked on in reducing barriers for access to our own stories. In light of the above, perhaps it could be argued that being denied a screening certificate by LPF probably won’t change much, beyond making Tuck Fai even more of a film martyr for his own cause.

More’s the pity, because this is a fine film in many respects. First of all, it is that rare beast of a short film being set in the 1990s. As a child of that decade myself, I loath to think of it as the one that slips ever farther by the day, but it helps to hammer home that we’re not exactly in Kansas anymore, Toto. Secondly, that fact reminded me that we tend not to see as much the 1990s being portrayed on screen, which is astounding given how important that decade was. While each ten-year period carries with it their own importance, the final years of the last millennium remain a timeframe of astounding shift in the country’s political landscape, and, by extension (though it probably shouldn’t be the case), its socio-economic discourse as well.

From a media perspective, the behind-the-scenes, Machiavellian machinations of the then-prime minister Dr. Mahathir in removing ministers from his cabinet marked the start of a period where public discussions of anal sex (amongst other things) became de rigueur of the day, either through mainstream or more independent means. In ‘I Love M.U.M.’, the background that is the media becomes just as important as the foreground. We see characters, for instance, stopping their chores to listen to the news, either on television or the radio. Perhaps, much like me, they themselves were agape at the following words that is probably the real reason why LPF refused a screening certificate for the film: “Today, Deputy Prime Minister Datuk Seri Anwar Ibrahim…” 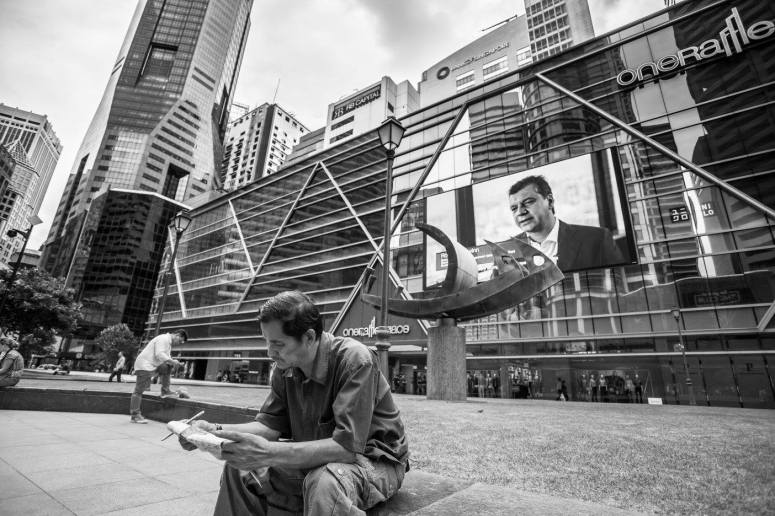 Going beyond such political contexts, the economic issue is also emphasised; in one moving scene, Tong Sin’s father, Tong Hao (Daniel Tan) comes home early, just as his wife was listening to a radio broadcast. Though he had lost his job, he covered it up by lying to her, a strong moment that puts the nation’s economic situation firmly in the personal spotlight. Again, this is not that common a thing to explore, and I believe that it deserves to be labelled a period film.

Tuck Fai’s Taiwanese experience may have also influenced the film’s aesthetics. Though officially a short film, the style of dialogue and shots is more reminiscent of a television effort. I don’t mean this in a derogatory sense either, only meaning that it would not be out of place should it be screened on the small screen, with a set of aesthetics and plot devices reminiscent of East Asian television products; the film’s ending would certainly be at home in a South Korean drama. I recall NTV7 having a slot for the screening of short films some years ago, and perhaps this may be an avenue the team would be wise to consider on a more global or regional scale; the film’s running time of nearly 30 minutes hammers home this impression. The production design and props appear to be authentic enough, while I also applaud the creation of the news broadcasts of that time period. The quality is fairly high and pleasing to note for a production of this scale, a period film looking at a period oft-unseen in our films.

Ultimately, this film could be read as a lament for the home, a soliloquy yearning for the open arms of a family and a loving embrace; the aforementioned national anthem scenes are key to this. While the LPF has failed in their duty, Tuck Fai should also bear in mind just how good it would be if the Malaysians who are not Chinese-literate (and who don’t follow FilemKita on Twitter) are given easier access not just to watch this film, but also to finding out more about it. Maya Angelou once wrote, “The ache for home lives in all of us, the safe place where we can go as we are and not be questioned.” In writing this piece, I am one who would be happy to make that space for this small film with a big heart and a lot to say, if only to alleviate that ache in your soul.