Ahmad Syazli Muhd Khiar puts on his hacker’s hat, and considers the cinematic secrets of the Malaysian auteur.

In immersing into the totality of the film experience and interpreting how that experience is assembled, the importance of both sensual (what we see) and perceptual (what we associate) can be derived from the understanding of visual communications. Hence, the representation of meaning in films can be contextually constructed from the social process of making images, identity and fictional subjectivity that have direct relationship with the viewers who attribute their mental states to fictional characters in films.

As film has been used as centralised form of communication, involving the selection, production, and transmission of signs in such a way as to help a receiver perceive a meaning similar to that in the mind of the communicator, exploring Dain Said’s works in ‘Bunohan’, ‘Interchange’ and ‘Dukun’ involves the transmission of information and ideas using symbols and imagery, along with verbal and non-verbal communication codes (the understanding of how people derive meanings from visual). In this case, decoding Dain Said’s cinematic structures in these films can be explored from the study of semiotics and semantics of symbols and visual communications, as well as the attributional interpretation and its communicational inference.

Therefore, in order to break the code visualised in these movies, let us analyse the spectrum of communication as a social process in which these movies employ symbols to establish and interpret meaning in their environment from five key perspectives: social, process, symbols, meaning and environment. This might be helpful to immerse ourselves in how Dain envisaged his ways in translating a beautifully-written screenplay into a fully formed film, and then to realise his identical vision and signature, constructed by visual, aural, and linguistic components that were strangely manipulated in unique ways. I personally believe that, despite being an avant-garde surrealist filmmaker who remains intent on subverting local conventional filmmaking and exploring the realms of his cinematic capabilities, Dain Said shines pertinently as a social and cultural anthropologist of visual communication, studying and telling the norms and values of societies and providing highly coded and selective information about the social lives of the local-focused community or subjects.

Decoding, interpreting and comprehending communication styles used by Dain Said in these three films is essential, as it helps the audience to understand the films’ cinematic structures. The basic premise of ‘Bunohan’ (released in 2012) features Faizal Hussein, Pekin Ibrahim, Zahiril Adzim and Wan Hanafi Su in a story of how three brothers, each with a murderous profession, flee their home country and family, only to find themselves back together in the titular small border town, where they are forced to deal with their pasts. The film is a depiction of familial connection, brotherhood and corruption of society in tackling fame and wealth

With ‘Interchange’ in 2016, we follow the story of forensics photographer Adam (Iedil Putra), who is dragged into investigating a series of macabre ritual murders in the city, by his best friend, Detective Man (Shaheizy Sam). They then befriend Iva (Prisia Naution), who is on a mission to rescue the souls of the people in her tribe trapped inside a glass plate negative. Finally, the long-awaited ‘Dukun’ (released earlier this year in 2018) revolve around an investigation into the death of a politician at the hands of a bomoh (or shaman), centering on a conflicted lawyer, Karim (Faizal Hussein), who is searching for his lost child, Nadia (Elyana). This leads him to be entangled with an alleged murderer, Diana Dahlan (Umie Aida), who links the disappearance of Nadia to darker secrets that could cause Karim to lose everything.

Deep Focus: Space and Proximity
Vividly, all three films manifest Dain’s reflection on ‘proxemics’, which is the use of space by the characters and how that affects the behaviour, communication, and social interaction of them. This is one of the important elements of visual communication in a film that motivates the audience to understand the emotional impact portrayed by the characters via their personal territory, including level of haptics (touch), kinesics (body movement), vocalics (paralanguage), and chronemics (structure of time).

In ‘Bunohan’, the three estranged brothers, Adil (Zahiril Adzim), Bakar (Pekin Ibrahim) and Ilham (Faizal Hussein), along with their ailing father, Pok Eng (Wan Hanafi Su), are separated in the ‘public space’ of their village, but remain interconnected ‘personally’ after tragic incidents. Despite staying with his son, Bakar, Pok Eng emotionally struggles to reserve his personal space and avoid building intimate space with Bakar and Adil. Dain’s brilliant narrative in showing the human space used in this father-sons relationship gradually brings the audience into the development of the characters. 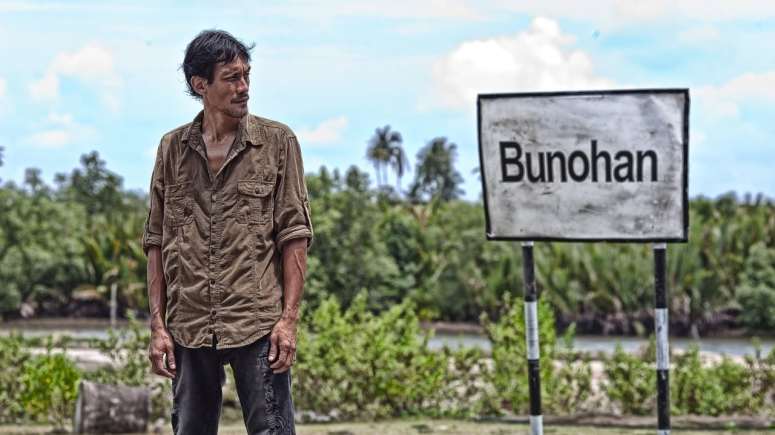 Carrying the noir-fantasy thriller, ‘Interchange’ somehow represents tactical dimension of space and proximity. The audience must be able to deeply engage on how interpersonal distances of characters, the organisation of space as territories, and the cultural factors related to proxemics are portrayed within the relationships of Man-Adam, Adam-Iva, Belian (Nicholas Saputra)-Iva, Belian-Man and Belian-Sani (Nadiya Nissa), as it varies from one another. In the public space of Metro city, these characters strongly stand in their own personal space and move towards special intimate space, where they are emotionally and spiritually connected.

As communication reflects the process of reciprocal interaction in understanding messages between sender and receiver, we could also analyse the space codes used in ‘Interchange’ within the supernatural and mystical dimensions. How Adam and Iva using their virtual connection, for instance, can be explained from Fred H. Previc’s neuropsychology of 3-D space, focusing on extrapersonal space: the space that occurs outside the reach of an individual. Beyond logic, the audience must be convinced on the spiritual connection of Adam, who can deeply immerse in and embrace the mystical spectrum of Iva and the tribe. This strong interpersonal connection within the extrapersonal space reflects the emotional journey of these two characters.

What about ‘Dukun’? Interestingly, Diana (the epitome of the kebatinan belief system) powerfully plays an integral role in the communication process as, socially, she interacts with various intentions, motivations and abilities via her strong use of interpersonal ‘space’, mysteriously existing in every fragment. The intimate zone or space can be seen from her interaction with Nadia that is dynamic, complex and continually changing, potentially breaking the codes (Diana genuinely cares about Nadia). Now, the ‘personal’ zone or space visually translated from the interactions of Diana-Karim and Karim-Talib (Nam Ron) are mostly private, and not meant to be overheard, as they provide clues for the audience to enter this space.

On the other hand, Dain gives a non-linear view of the communication process in the social space (Diana-Court Trial), in which audience members are allowed to immerse themselves in the social conversations. Aptly, it is a cognitive learning process for the audience, to be highly associated with Dain’s aesthetics approach in visualising his bold artistic vision, as he confidently conjures a world of magical shape-shifting shamans and mystical beings within the urban landscape.

Read part two here. Syazli is the Director of Research and Strategic Policy of FINAS, and contributed to this article in his personal capacity. The views expressed are his own and do not necessarily represent the views of the National Film Development Corporation Malaysia. It was originally published here, and you may contact him at syazli@finas.my.