The simplest way to describe ‘Forget Me Not’ by Anwar Johari Ho is to link it to other films; watching it, I can’t help but detect strong whiffs of Wong Kar-wai’s seminal efforts. Chief amongst these would be ‘In The Mood for Love’, that classic of near-misses with a near missus. Such longing can also be detected in some of Edmund Yeo’s films, which makes me realise just how prevalent this representation of lack is amongst filmmakers of Chinese origin (there is a point to this, so do bear with me).

The film tells the story of Ah Liong (Kelvin Yeoh) and Lei (Shen Yilei). Split into three parts, the first details their encounter in 1996 at a Chinese restaurant in London, where they work as staff members (presumably while studying in the country). We then fast-forward from this meet cute to the eve of the millennium in 1999, before meeting up with them again in the year 2002. Brief though this description may be, it must be noted how explaining everything in one go runs the risk of spoiling the journey best discovered in the course of the film. I nevertheless hope to provide enough to paint an accurate picture for you.

The first colour I’ll dip that brush in is that of nationality. It is connected to the second shade (that of ethnicity), and while there are overlaps, the focus is more on national identity for now. While both leads are ostensibly Chinese, there is a divergence between the Malaysian-born Ah Liong, and Yilei, who hails from mainland China. That difference allows for a discussion in and of the gap in between, ruminating on Chineseness on the global stage. 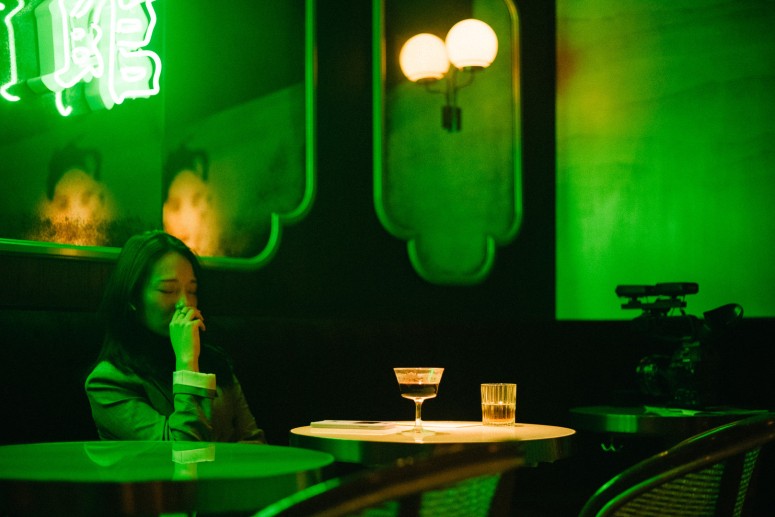 In particular, two scenes are useful for our purposes. The first features a background radio interview, in which a Singaporean man laments how, beyond his own borders, he is seen as anything but, often mistaken for other Chinese-majority nationalities. I am so tempted to say that the voice belongs to Lee Kuan Yew, the former prime minister whose vision gave rise to the modern city state Singapore is today, but I could be mistaken.

A more personal view could be noted in another scene, where Lei reveals her thoughts on London: “The first time I came here, I was scared I would lose myself.” It suggests how challenging the migrant experience must have been for her; even if official slogans of such global cities celebrate their so-called diversity, day-to-day realities mean that the acculturation process often leads to an erasure of difference, in the face of a Western-centric dominance. “Forget who I am,” she continues, outlining her fears. “My language, my home. And yet, here I am.”

That ‘here’ (her longevity in London) can be contrasted with Ah Liong’s own experience, indicating how she has become one of ‘them’, a member of the global citizenry. This is particularly highlighted in a key phone conversation, which takes place inside a London phone booth (a scene so good it became its own short film). Framed by that classic signifier of British identity, the camerawork hints that she is also constrained by it, fixed far away from Ah Liong on the other side of the planet.

All this made me wonder: is she too international for homely, domestic affairs? This is the second dip of the brush, one that is connected to the Chinese diaspora, whose members exist almost exclusively in gaps; extending the Singaporean example above, in China they are not seen as Chinese, yet they are perceived as precisely that even back in their own countries like Malaysia. Speaking of which, Anwar’s Sabahan roots also made me curious whether this is an attempt to touch on his community’s representation in mainstream (read: West) Malaysian consciousness.

What is more universal is a fairly conservative and patriarchal culture, consistent enough from one geographical context to another. In attempting to transcend these boundaries, Lei floats alone in the international ether (exemplified by a point in the film where she speaks of loneliness). In short, is she being punished for straying too far away from her roots? Does her entry into the international club render her own efforts at domestic happiness largely futile?

There’s a slight misogynistic strain to that thought that is a little uncomfortable, though given Ah Liong’s own characterisation, it remains an important one to consider. Again, the more obvious discussion is that Anwar intends Yilei to embody the crucial existence that lies beneath official categories. His evocation of nostalgia (a lamentation of the past made present through a song of Hong Kong singer Tsui Ping) is key to this, an interrogation of identity suitably played out in a romance markedly firmly as ‘it’s complicated’.

While I mentioned how these thematic connections could be made to the likes of Wong Kar-wai (whose films also question the idea of belonging), there are stylistic similarities as well, such as the dropped frame rates, which lend a smooth emphasis to the ellipsis these characters live in. Non-linear insert shots from their memory, detached from the diegesis at hand, also provide momentary shifts in perspective; again, this connects to the multiplicity of lenses those who negotiate distant contexts are often forced to wear, conflating the here and there with the then and now.

On the technical level, the film is very well done. Special commendation must go to Pierce Polak, whose sound work is especially notable; there is at least one moment in the film where I’ve literally turned around, wondering whether I should answer that phone call. It’s something I fall for every time, and, given that I’ve seen ‘Forget Me Not’ a number of times, I prefer to believe that is because of Pierce’s quality work (as evidenced with the film’s numerous nominations and awards in this category) rather than my own gullibility.

All this makes ‘Forget Me Not’ a memorable film, marking out Anwar as a filmmaker to watch. Discussions of identities between boxes and in transition are always welcome, and his contribution here is one that is well-received. Even if we are to ignore all that, this is a film that made me feel as much as it made me think. I can imagine that for those on the same journey, it may hit closer to home, even if, like Yilei, they are far away from it.