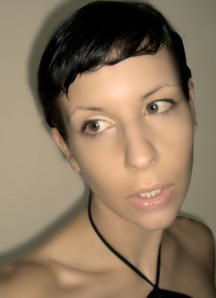 Interesting, that in a time where people would always want to go beyond the borders of this country, there are those who want to come in. Even more interesting that that person would choose to come into the filmmaking world here. And that person is Juliane Block.

Describing herself as “the only white female German filmmaker in Malaysia”, she recently finished post production on her feature film, ‘Emperor’. Adapted from a Braham Singh novel of the same name, ‘Emperor’ looks at the underworld of gangsterism (if that is a word) once again, a theme she has visited plenty of times before in her previous movies. Why is that so? Why does she love the Internet so? And what the heck is the Factory? (a secret society of contract killers who have special powe…oops, got that mixed up with The Fraternity 🙂 ).

Your background includes formal education in production design. How did this translate into a passion for writing and directing films?
I’d say it translates more into a passion for directing films than writing. I am more interested in getting the story into it’s visual form than creating the content in words. However without story there’s no movie. I’m happy that I found two very good writers for my last productions, who were willing to takeover the writing part for me 🙂 (Braham Singh & Adrian Lai)

My university degree is in Industrial design. I chose this major because I was looking for a combination of technic and art. However, during my studies I found Industrial design too be too corporate for me (automobile design, tools, electrical appliances etc.). My major projects were all border-line cases towards graphic design or production design. 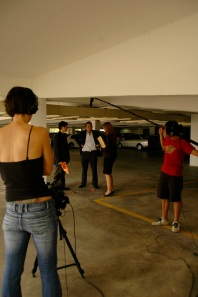 Speaking of practical experiences, you took part in the Berlinale Talent Campus earlier this year. What exactly did that entail?
The Berlinale Talent Campus consists of panel discussions and workshops. Besides attending as a general participant, applicants can also apply for additional hands-on training called the ‘Garage Studio’. I applied with a short movie script for the ‘Garage Studio’ and was 1 of the 4 selected out of hundreds of applications. On 4 different days, 4 short movies get produced (mine was shot on day 2). The pre-production was mainly done online, the actual shooting and post-pro had to be done in 24 hours.

There was very little time for anything other than the production; whatever time I did have though I spent it in discussions about new ways of distribution for independent filmmakers, where I got most of my ideas for the marketing of “Emperor”, my current feature film project.

How did you end up working extensively in Asia, initially in Hong Kong, and, more recently, Malaysia?
I had a partnership in a design and film agency in Germany. We closed it for personal reasons in 2005 and looking at my CV at that time I figured that the only thing missing was experience abroad.

Going to the US was an option, but then I would have been one of x million of (white) wannabe-filmmakers. Better to try something more unique. I’ve always found Asia fascinating and thought to myself, “it can’t be that difficult to survive in Hong Kong, since it was a former British colony and people there do speak English”. Additionally, most Asian movies we were getting in the West came from Hong Kong, if not Japan.

I took the option offered through a friend to move to Malaysia to get as much experience (especially regarding cultural diversities) as possible.

Speaking of Asia, you’ve mentioned that there are Hong Kong film figures, such as Johnny To and Wong Kar Wai, who inspire you. Was this primarily because you had lived there extensively before? Or where they already inspirations of yours before you went to Hong Kong?
I knew I liked Asian cinema before I left for Asia, but I started picking my favorites while I was living there.

Originally, you’re from Germany. What do you think of German cinema, currently?
The German movie industry is difficult for newcomers. It’s not as difficult as the US I suppose, but the size of the industry (compared to Malaysia) makes it a lot tougher to stand out.

Recently there have been quite a few German action movies released. I like the trend because it shows that German cinema is trying to move away from it’s grim history and has become more open to a variety of genres. A few years back it was almost impossible to find a good German action movie.

Having lived in a different countries, how much has your experience influenced your filmmaking vision?
After having done guerilla shoots in Germany, Spain and Malaysia I can say that the principals apply everywhere: be polite, talk as much as you need until “they” say yes and leave the shooting place earlier than expected and cleaner then it was before. If you follow these little rules it’s possible to get almost everything for free. And the support for your work grows.

I hope that the influence of different cultures make my stories richer, and my movies more enjoyable to watch.

Moving on to ‘Emperor’, you adapted it from a novel by Braham Singh. What is it about the book, out of all the other books and stories, that makes you think, “This’ll make a good basis for a film”?
We (my current collaborator and movie partner-in-crime Adrian Lai) knew Braham before, and after reading the first version of his novel it was obvious that it fit perfectly into my German background combined with the possibilities we had here in Asia.

In general it’s important to simplify a story as you adapt it for the screen. Novels usually have more complicated plots because they aren’t bound to a time frame of 90 minutes.

Were there any problems in terms of securing the rights for it?
Braham loved the idea of adapting his novel into a screenplay, so in this case we didn’t have any problems.

What is the process like in terms of deciding how much of the novel to adapt to the big screen?
Well we narrowed down the plot to a few interesting main characters and tightened their stories. Scenes were picked based on locations that were easy to manage and cheapest to shoot at.

‘Emperor’ and ‘Unsecured Loan’ both has major underworld overtones, in terms of subject at least. Your previous film, ‘Killerbus’, is also about criminals and gangsters. What is it about this world that fascinates you to the point of making films about it?
I believe everybody has a dark side. (I certainly do.) There are different ways to handle it. I personally find movies an excellent way to explore all the facets of human behavior without the risk of harming anybody for real.

Apart from crime, I also love sci-fi, fantasy and mystery which almost always have dark themes, or deals with the dark side of humanity. However, crime movies are easier to make on a shoestring budget 🙂

You mentioned in an online video preview that you believe old distribution ways are dying, and that the digital avenue is the way of the future. Can you please elaborate on this? Can’t both the old and the new co-exist effectively together?
Can a theatrical release co-exist with an online distribution, yes, that’s possible. The traditional method of distribution is known as ‘timed window release’. First comes the theatrical release, then DVD and Video followed by TV as final stage. For this system, piracy means heavy losses.

I don’t think there’s any way to stop movie piracy. People are already used to watching films for free from internet downloads. They aren’t always willing to pay for an original DVD. But given a choice, most people will be willing to pay you a fair amount for your earnest efforts. The success of iTunes Music Store and Music Today shows that people don’t stop paying for entertainment, they just shift where and who they give their money to.

In my opinion filmmakers should adapt to new ways of distribution instead of fighting a movement which can’t be stopped.

An example of this can be seen with ‘Emperor’, participating in the ‘From Here To Awesome’ competition. Can you explain a little bit, in layman terms, how the concept works? I’ve been to the site a few times, but I still can’t quite get my head around it. How effective can it be?
The filmmakers first approach should be to get his work out to an audience. My Berlinale short “It could happen to you” got more the 100 000 views because it was pushed by the Berlinale marketing through Youtube. In comparison, I doubt that my short film “Unsecured Loan” got more than a couple of hundred views even after participation in 4 international film festivals. The online media is a very powerful channel to get yourself an audience.

The From Here to Awesome founders have proven that there’s a massive opportunity to distribute movies through the internet without having to travel the expensive “traditional” festival circuit. Most festival entrance fees cost on average about USD50 and if you don’t turn up personally should your film get selected, your chances aren’t very high that you sell your movie at all. 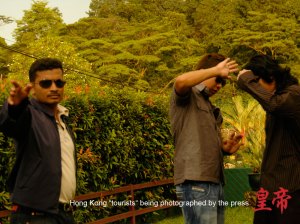 Does it also mean that you’re going to post the entire movie online, rather than releasing it in the cinemas?
Likely in low quality for a certain amount of time.

So you’re not going to release it in the cinemas, then?
Well, (theatrical release in Malaysia) is still possible. However, we are not holding back the worldwide release just to make sure we don’t spoil a theatrical release (which we don’t have…yet). All release forms are possible, we are just not following the normal time window system. We target Malaysia for the end of this year.

Outside of filmmaking, you also have other interests in other areas. Looking at the Factory, for example, encompasses July Style (design), J Blockbuster (movies) and The Factory Music Studio (music). Is this a deliberate realisation of a deliberate plan, to create a filmmaking conglomerate of sorts? (correct me if I am wrong, but looking at the information and presentation online, I’m lead to believe that all these entities are linked under one company).
We are closely linked but not under one big company. Yuri Wong heads The Factory Music Studio while Adrian Lai runs The Factory Movie Studio. The Factory Movie Studio collaborated with J-Blockbuster for the production of “Emperor”. J-Blockbuster and Julystyle are my own companies linked as collaborators and design counterparts of The Factory. Adrian and Yuri founded the concept of The Factory here in KL as a ‘conducive enviroment for creating and distributing entertainment artforms’. The goal is to create, package, market and distribute works which can put Malaysia on the entertainment world map.

On your website, Julystyle.com, you stated that you wanted to remain in the art direction segment of filmmaking. How much of this remains true?
It’s an old statement I haven’t deleted yet out of the time when I was actively looking for paying clients 😉

What’s next for you? Any upcoming projects that you can talk about?
Adrian and I are working on our next feature production, a dark sci-fi thriller, set in an Asian megacity. Planned shooting is January 2009, release around September / October 2009.

‘Emperor’ will be released soon. To find out more about Juliane, and to view her previous short films, click here. Her art design stuff can be glimpsed at here, while the Factory and all of their respective affiliates can be checked out here. Phew…