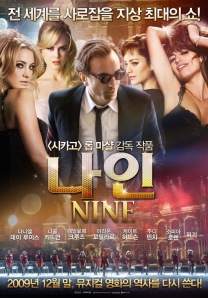 I am not that big a fan of musicals. I am not entirely sure why, because I do enjoy them. I like going to watch theatre musicals once in a while; a memory of ‘Fame’ and ‘Oliver Twist’ during my youth is always a delight to recall. Having said that, the fun, the excitement, and the feeling of wanting to dance along to “FAME! I’m gonna live forever…” is always something that doesn’t quite last. It remains perfectly preserved in that moment itself, but seemingly deprived of its own respiratory system once the credits started to roll. I loved ‘Fame’, but I wouldn’t go out and buy the CD. I enjoyed ‘West Side Story’, but it is still somewhat missing from my ever-burgeoning DVD collection.

Is this something that is limited to me, or is it an inherent quality of musicals themselves? Do others feel the same way, or am I the lone wolf here? More importantly, and more to the point of this particular write-up, will ‘Nine’ go the same way as the rest, or will it become something truly memorable?

Guido Contini (Daniel Day Lewis) is a film director, often regarded as highly as his nickname, Maestro. He has the world (or at least, Italy) at his feet. He has women fawning over him by the bucket-load, including his beautiful mistress Carla (Penelope Cruz) and his muse, international superstar actress Claudia Jensen (Nicole Kidman). However, he is married to (in my humble opinion) the most beautiful of them all, Luisa (played by the oh-so-heartbreakingly-beautiful-“you’re-tres-belle!” Marion Cotillard). He even has a film (grandly titled ‘Italia’) set to be filmed imminently, with a cast and crew willing to follow his every whim. There is, however, but just one problem: he couldn’t come up with the script. More than that, he’s going through a midlife crisis, a crisis that will threaten to engulf all of his relationships to all the women in his life, including Luisa. In such times of crises, he turns to his costume designer, Lilli La Fleur (Judi Dench), for emotional support, as well as to the spiritual incarnation of his deceased mother, the imaginatively-named Mamma (Sophia Loren). As the film start date gets closer and closer, he attempts to escape from the film itself, running away from the film producer, Dante (Ricky Tognazzi), as well as coming to terms with his Catholic faith (making the way for a few absolutely hilarious moments with the Holy See).

As you can tell, Guido Contini is one lucky bastard. In many ways, it’s hard to feel sympathy for him. He has fame and fortune by the barrow-load, the ability to make a career-defining movie, a bevy of such beautiful ladies (even the journalist Stephanie, played by Kate Hudson) just wanting more and more of him…and he’s having a midlife crisis. I suppose that’s probably when midlife crises strike the most often, but it is still somewhat difficult to have some sympathy for a man whose only problem appears to be that he’s fooling around with too many women, that he’s too famous, or that he thinks he is too good, that the art of filmmaking is too sacred an art to be done half-heartedly. It is the reason why he hasn’t written a word of the script yet.

Difficult, but not impossible. On that last note, certainly, I can relate to a large extent. It may seem simple to someone who doesn’t do it regularly, but writing about something that you actually, truly really want to do can be difficult to get off the ground. Many writers suffer from the fear of the first page, the blank page, and this is expressly…err, expressed within the first few minutes of the film. “Page one…page one, page one, page…nothing.” It is an interesting way to start the film, and I didn’t expect such a direct statement to be made. It certainly caught my attention, and for a reason I can relate with, but I don’t know whether other people would feel the same. It shouldn’t be a surprise, given that the musical this movie is based on is in itself based on a movie called ‘8 ½’ by Federico Fellini, also about a filmmaker struggling to make his film for similar reasons. Fellini is also Italian; is this, then, an Italian/European agony that must be experienced in order to create art?

We then move into the main song introducing the film, featuring all the aforementioned women of his life. It is, in fact, not particularly bad, but unfortunately…as I have written before, I have trouble recalling most of the music in musicals, and now the same applies to ‘Nine’. I honestly can’t remember, which in itself is rather worrying, but that’ll be a personal issue to be tackled for another day. As it stands, the most memorable song is ‘Be Italian’ by Saraghina (Fergie), not just for the performance that wouldn’t look out of place at an MTV event. The lyrics of the song itself may seem ridiculous (“When you hold me, don’t just hold me but hold THIS!” before motioning towards her breast, which probably explains why I remember it the most 🙂 ). Beyond that, however, I can’t even recall how the Oscar-nominated song ‘Take It All’, performed by Marion Cotillard, goes. Terrible, isn’t it?

Ironically, that’s not to say that the songs themselves are not something accessible, not something enjoyable. In fact, I enjoy being surprised when I watch films, and in listening to these songs, I find myself being surprised a lot. Subconsciously, I mentally make a list of the possible words and sentences that could be strung together, to rhyme together, as I listen to a song itself. I tend to do this for a lot of the songs I happen to listen to, and half the time, I am not particularly surprised. In this film, however, I find myself doing the same thing, and not being right most of the time. “Some men run banks, some rule world the world, some earn their living baking bread,” crooned Luisa in one song, “my husband goes a little crazy…making movies instead.” As I told my friend during the film, if you had paid me money to get it right within five attempts, I’d lose plenty of money.

It’s quite funny, too. Some of the funniest involved the director trying hard to arrange an appointment with the cardinal, but finds himself answering questions by the priest such as, “Do you think you can find a signed photograph of senorita Jenssen?” It did lead to a bathtub meeting with the cardinal. “I like Charlie Chaplin,” the holy man started, as he is immersed half-naked in the tub. It’s something that is still as memorable, and as funny, as I think about it right now. It’s just…so ridiculous. His antics in running away from his producer was childishly funny, while I was also more than just a little amused during a racy phone conversation he had with Carla. It was a conversation he took while being treated by the doctor, and it just so happened that the nurse was taking his temperature at the same time. “Doctor,” she noted, “his pulse is racing. Is something wrong?” Well, if you have Penelope Cruz on the line singing, “Who’s not wearing any clothes? I’m not,” your pulse would probably skyrocket as well.

This is what the experience of watching ‘Nine’ was like. Once you get past the slightly off-putting fake Italian accents, it was these moments, the racy jokes, and the childish ones too, that makes for a very pleasant viewing. I suspect there will be those who will also be nodding their head along quietly to some of Contini’s remarks about filmmaking. The rest, however, might be cheering at Lilli for cutting through the bullshit once every so often: “Directing a movie is a very overrated job. You just have to say yes and no, what else do you do? Nothing.” It is such comments, such trials and tribulations, that makes it difficult to actually like or dislike Contini. Though he is well-acted by Day Lewis, I suspect people will just find it difficult to get on board with the programme. It is unfortunate, for it is a fun and enjoyable film to watch, with a lot of really good actors doing some rather good work (though I have to admit I wondered whether Penelope Cruz did enough to even earn an Oscar nomination). The lighting for the musical scenes are also a delight; I remember watching a documentary about cinematography, and one cinematographer noted that he used lights not to create light, but to create shadows. Perhaps this is an overspill from the theatre mode of lighting, but it looks absolutely gorgeous here.

Pity, then, that just as the art of directing itself, you might end up leaving the cinema, and think to yourself a few days later, and ask, “What was it all about, really?”

Don’t ask Fikri what directing is all about, either. We’d be here all day…