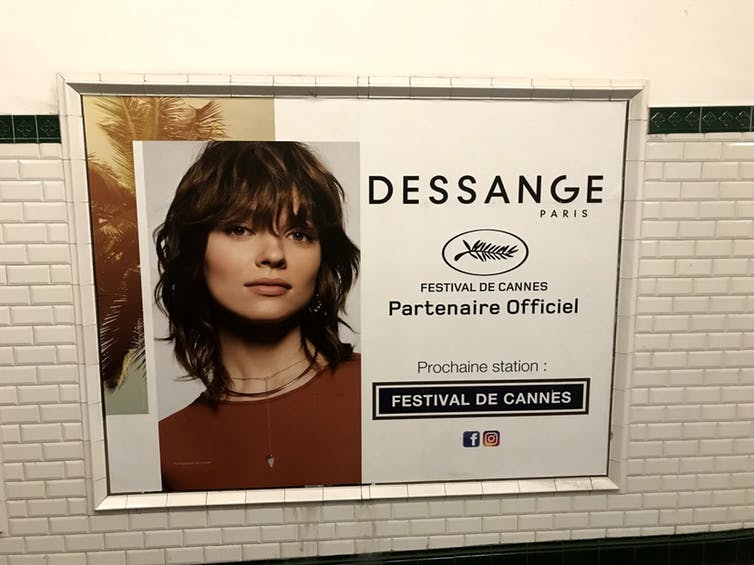 Contrary to what you may think, the annual Festival de Cannes is not, strictly speaking, a film festival at all. Rather, it is a large industry event that screens films for celebrities and other insiders – ordinary people cannot usually attend except under special arrangements. Where its real importance lies is the less visible side – as a marketplace where international producers, distributors, exhibitors and others whose business is film, congregate and make deals.

For wider audiences, Cannes only exists as mediated staging, which plays itself out on monitors, on phones and in fashion magazines: the photo ops, the red carpet reports, the celebrity catch-ups against the backdrop of the blue Mediterranean. Cannes, as mediated, projects a concentrated celebrity image under the pretext of cinema – the festival is covered as much by fashion journalists as it is by film critics (now nearly an extinct species). It generates as least as much business for luxury brands – such as the jewellers Chopard who make the trophy, The Palme d’Or – as for the films.

As an event that thrives on media frenzy, controversies are the lifeblood of Cannes. Year in and year out, they are usually linked to the venerable red carpet and, whether it’s banning sneakers or the prohibiting of selfies, these are often absurd propositions that barely deserve the global attention they get.

One of the important myths that, once debunked, will diminish the relevance of Cannes is the illusion that it is the festival that holds the keys to distribution. This may have been true in the past but it is becoming more and more evident that if a film wants to be seen, it had better look elsewhere.

In the past, the belief was that when a film is presented at a respected film festival it helps it to get the best possible distribution so that the widest possible range of people can see it. But most Cannes winners for the past two decades have not left a significant mark in the landscape of contemporary cinema. A festival award can help with what American sociologist James English called “economies of prestige” status, in that power and value in culture are often created on the principle of factors that are not strictly economic ones – but it does not decide which films get wide distribution. Advances in technology have lessened the role of traditional film distribution – where a distributor is needed to mediate between the producers of a film and the exhibitors at the cinemas. Netflix, for example, provides easier exposure to a wider audience, with no need for the mediation of Cannes or any other festivals.

Welcome to the club
The real problem with Cannes, however, is that it is less of a festival where new films and talent are discovered and more of a club. Cannes has huge relevance for a fairly exclusive group of high-profile international auteurs/cineastes whose work is monitored with attentiveness and “selected” for inclusion in the main competition. Being part of the club helps with exposure that secures continuity for the work of these people.

This “club” has a subtle and unspoken “admission” process. For the most part, the elite membership is renewed (or, if an occasional hiatus takes place, membership is restored some years later – as in the case of Lars von Trier, whose Hitler gaffe earned him a ban back in 2011). Occasionally some are thrown out indefinitely – including Cannes enfant terrible Emir Kusturica, a double Palme D’Or winner, who says his films are being rejected by Cannes because of his support for Vladimir Putin. Occasionally some new members are let in – including this year the Polish-British director Pawel Pawlikowski, who is being admitted on the basis of his recent foreign language film Oscar for the film ‘Ida’.

The clubbiness of Cannes has been reinforced in 2018 by an announcement by Festival director Thierry Frémaux that the timings of press screenings are now controlled to ensure that critics can’t spoil a film’s chances in competition. It is the concern of the elite club that speaks – members are prioritised above the public.

Women out in the cold
For as long as Cannes operates as a club that needs to maintain the elite standing of its members, women filmmakers will remain out in the cold. The director of the festival has claimed that the selectors would not compromise for quotas and they would continue working to the singular objective of making “the best selection possible”.

But if it was just about the quality of the films, we would not be seeing Cannes coverage that mainly uses figures of speech such as “this person returning to Cannes” or “that person migrating from Venice/Berlin to Cannes” – all making it clear that it is more about maintaining the status quo of a handful of auteurs than about specific films.

Selection to the Cannes main competition is more about ensuring that the new work of club members is up to standard and can be shown rather than about selecting the best films from around the world. And, for as long as this is the case, women will generally be left out.

The current festival’s silent female protest or the pledge for equality by the three men known as “‘Cannes toppers” – festival director Fremaux along with his colleagues Charles Tesson, the director of the Cannes “critics week”, and Paolo Moretti, who runs the festival’s “directors’ fortnight” – may set intention but it remains to be seen if it will change the culture.

Last but not least, the film festival at Cannes is an iconic French brand, comparable to the Eiffel Tower, the Louvre and Chanel No 5. There are higher towers open to tourists, less crowded and equally rich art museums and more appealing perfumes in the world. Similarly, there may be better film festivals – but Cannes is the first that invariably comes to mind.

It is this special brand position that keeps Cannes relevant. But as for ensuring diversity and equality? That’s a whole other story.

Dina Iordanova is the professor of global cinema and creative cultures at the University of St. Andrews. This article was originally published on The Conversation, an independent source for news and views, delivered with academic rigour and journalistic flair.