When Martin Scorsese made his comments about what cinema is for him, it caused a bit of a kerfuffle amongst many groups of people across the world. It’s not only that he is a filmmaker of some renown (meaning that any passing statement about the state of cinema is bound to be treated as an important treatise), it is the sense or perception that his definition does not include that which many have come to hold dear to their heart.

Principally identified in his crosshairs is the 21st century blockbuster, made most visible by the comic book or superhero film. Without delving into his discussion all the way, I am keen to focus on the concept of risk. In particular, his lamentation of how modern films have a tendency of playing it safe caught my attention, as exemplified through test screenings, as a way for films to stay on track with its target audience. Though it is a key part of improving many films, for him, too much emphasis can be given to making the audience happy and satisfied.

As much as I enjoy many such films, his point resonated with me. This is especially so with the resurrection of dead characters; if they could be brought back to life, if we proceed apace with such asterisks in our experience, then what’s the point of suspending our disbelief? Simply put, death isn’t dead anymore, affecting how we invest our emotions into a narrative. Though many films are guilty of this, the worst example I often recall is the final ‘Twilight’ film, in which the big final battle scene turns out to be anything but that.

That’s not the case when you watch ‘1917’. Set during the first world war, the film features two young soldiers, Will Schofield (George MacKay) and Tom Blake (Dean-Charles Chapman), tasked with getting a message to the other side of the other battlefield. As all standard means of communication are down, it is up to them to ensure that the message is delivered in time; doing so would mean not only maintaining a strategic advantage critical in wartime, it would also save Tom’s own brother amongst the many other soldiers whose lives are at risk.

And that is the concept we return to again. ‘1917’ is risk personified. Presented primarily as a one-take film, that sense of tension is almost unbearable at times. That heavy air makes itself known through their travails of uncertainty. In particular, an early scene in the film has them navigating through a German underground barracks. In so many ways, it felt as if I was there, in that tunnel, holding my breath even as I breathe in all that dust and dead air.

Much of this is down to the A-list filmmaking team, led by Sam Mendes. In making the biggest film of his career, he is also making the most personal, inspired as he was by his grandfather’s wartime duties. Given Mendes’ extensive background in theatre, it also helps to contextualise his preference for the long take, often hinted at in previous films. Others, like Alejandro Gonzalez Inarritu, Vikster Chew and Song Il-gon, have also played around with this. While they also expanded the concept of time in their films, Mendes instead sought to compress it, emphasising the sense of risk and urgency.

This could have easily run afoul through monotony, but variety is sought and found through the blocking of actors and the camera movement; you’re never more than a few beats away from the characters shifting their positions on screen. Beyond this dynamism, Thomas Newman’s music composition also surprised me, perhaps simply by existing. Given the film’s hyper-realistic notion made real through the single take, I did not think there would be non-diegetic sounds. As such, it was a pleasant surprise, with one particular scene (running through a city, set at night, lit by flares) showcasing the power of cinema through a keen combination of action, cinematography and sound. 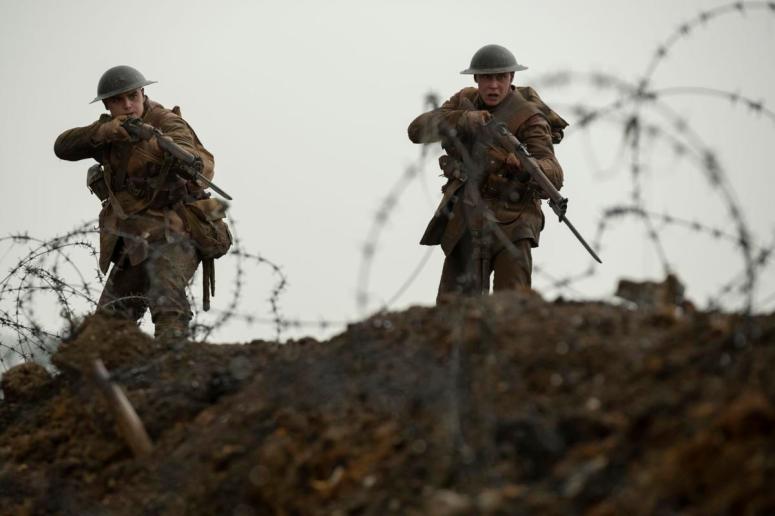 There is that word again: cinema. To that, I add the term history; cinema is equally effective in the historicisation of events. It’s intriguing how British films are keen proponents of history as a trend. I want to say that this is a reflection of the Great War’s centenary memorials, paying tribute to those who fell. Beyond other films (like Christopher Nolan’s ‘Dunkirk’ and ‘They Shall Not Grow Old’ by Peter Jackson), seasonal adverts by the likes of Sainbury’s also helps to set the table for the discussion.

Of course, the mistake I made here is assuming this to be a trend. Being here, what I realise is that in so many ways, the English are constantly enveloped by history, even if it is not a welcome embrace. Watching the film as a Silver Screen presentation at Broadway Cinema in Nottingham, I had not realised that the screening is primarily targeted at senior citizens. As such, I was very possibly the only audience member in that screening whose hair is not white (hence the name).

Experiencing such a brutally evocative film, then, as a part of this mass who must have had links to what we see on screen made me wonder what their thoughts and feelings are as the action unfolded. Post-screening, I wanted to strike up a dialogue with some of them, to discover more of such emotions. Unfortunately, I am not as courageous as Martin Scorsese in kickstarting a conversation that should be had, even if it is not what everyone would want.

Ah well. Maybe the next British war film, then.