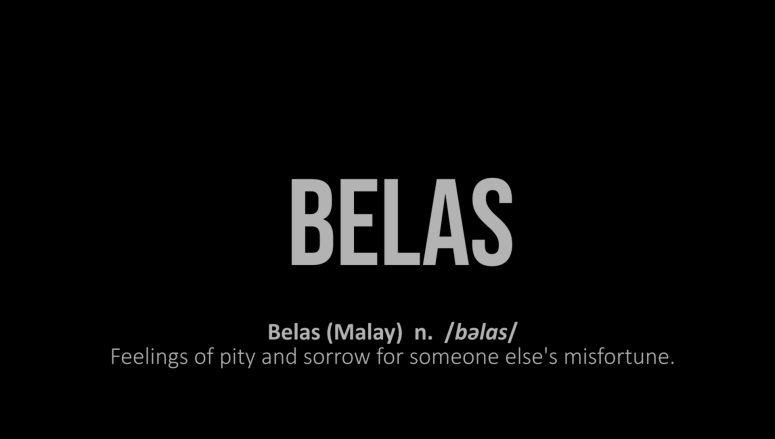 Fikri Jermadi considers how Adam Taufiq Suharto is breaking broken records in his own way.

We previously reviewed a film by Adam Taufiq Suharto, noting an interesting and critical approach to filmmaking: “Irony, satire and parody (amongst others) all come together, challenging and satisfying both at the same time, precisely because of that interrogation of what (Malaysian) cinema could (and perhaps should) be.” Having seen his subsequent films, ‘Belas’ and ‘Balah Tuah’, I am happy to observe this ongoing investigation.

Beginning with the latter, it tells the story of Hang Tuah (Naqib Aliff). A legendary figure in the country’s imaginary, his is a story reworked many times through lenses related to tragedy, power, politics and sexuality. It is therefore a surprise that Adam’s rendition here has more than a whiff of a Will Ferrell film. Both ‘Stranger Than Fiction’ and ‘Balah Tuah’ employ the same technique. Introduced to a narrative and its protagonist, this diegesis is interrupted when the voiceover narrator (so often presumed to be a reliable, extra-diegetic element) is noted by Tuah himself; stretching his arms while looking out to sea, Tuah is perturbed enough to stop his own actions, asking aloud whose voice that was.

This disruption is a welcome one, blurring the line between the story and its teller(s). We often immediately (and more to the point, unquestioningly) believe and trust our protagonist. What Adam has done here is to interrogate that trust, making us wonder who between the narrator and on-screen character we should prioritise. Oddly enough, it also reminds me of the television show ‘Gossip Girl’, where, by withholding the identity of the narrator, viewers were given the space to consider and/or conflate them together.

Another film I am reminded of is Pedro Almodovar’s ‘Bad Education’, where the black bars of the aspect ratio shifts between widescreen and CinemaScope renditions, denoting a difference between past/present and fact/fiction. Closer to home, ‘Ninavau’ by Bebbra Mailin does the same, working with a classic 4:3 before expanding it to 16:9. This connotes a relief for the protagonist (and the audience) after a key plot point. While there may be grains of the above in ‘Balah Tuah’, Adam’s deployment (vacillating between classic and wider-screen options) could perhaps be better connected to the former being the standard for old-school Malay films.

Such texts have found a home on YouTube (with a select number chosen for television viewing); uploaded by non-professionals, the unchanged aspect ratio has become synonymous with the genre. Speaking of YouTube, it was very interesting to see it featured in the film, playing the song ‘Saat Demi Saat’ (a song by Rosiah Chik) from the film, ‘Dang Anom’. These layers of consciousness (from the diegetic Tuah story to the YouTube video, via the narrator in his room) again point to Adam taking a more critical approach to the idea of authorship in a filmmaking context. That these elements bleed into one another at some points of the film suggest as well a more negotiated dislocation of the director as the author, an unseen god in control of everything.

Such notions were raised a notch in ‘Belas’. The film opens to the vast and empty sound- and landscape of Puncak Perdana. I’ve briefly discussed how these spaces encourages a more active audience, not only in interpreting the action on screen, but also the anchoring of the story’s time and space. In reality, many of the students in UiTM’s Faculty of Film, Theatre and Animation (FiTA) (of which Adam is one) make such choices as a matter of convenience, but they remain important cinematic discussions all the same.

We follow Wahyu (Fais Hafiz), a screenwriter searching for a spot of inspiration (more on this later). Having found it by the pond, he would sit and begin typing a new story on an old typewriter. In doing so, he did not initially notice Dewi (Zafirah Zahari), dressed in secondary school uniform with a pair of white wings on her back, who would walk by him before plunging herself into the pond. Wahyu saves her, beginning an intriguing connection between the two.

The film is actually quite funny in parts, much of that originating from the framing and stillness on stilts by the director of photography, Amirul Rahman. Having also shot ‘Balah Tuah’, ‘Belas’ is actually the less polished of the two (at times, the camera tilts could be a little smoother). However, the camerawork is perhaps a little more influential relative to the other storytelling elements. For instance, it could have followed Dewi as she went into the pond, but by staying with Wahyu (and hearing the splash off-screen), it provided more deadpan humour than I had anticipated.

What I also did not quite anticipate is how ‘Belas’ works to mystify the unseen. Adam’s films, from ‘Falasi’ to this, have almost always sought to pull back the curtains, pushing the author to the front of the camera. That is actually no different here; Wahyu’s story (as written on the typewriter) is identical to the story we see on screen. His name (meaning ‘inspiration’ in Bahasa) is also not without significance here, as this is very much a projected work in progress being worked on.

At the same time, the film’s final shot adds to the mystification mentioned earlier, befitting Dewi’s character. Her name translates as ‘goddess’, which, paired with the pair of wings she wore, adds a more ethereal sense to the proceedings. Can we perhaps attach a more religious reading to this story, that this is a small tale of a much bigger picture of goddesses and gods in idyllic scenes of natural beauty? 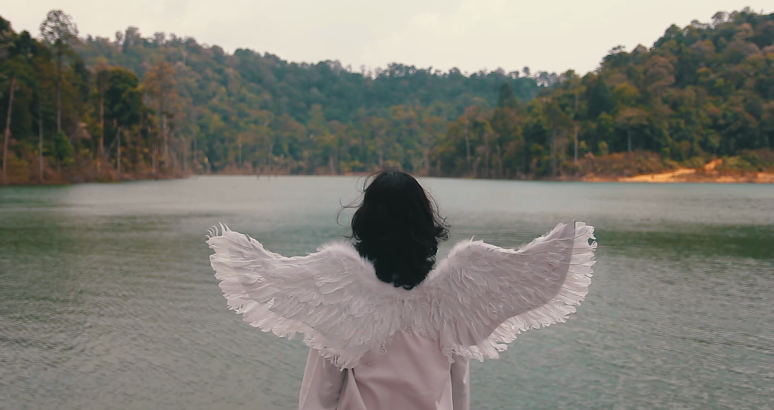 More certain are thoughts related to child abuse and marriages of minors. Dewi’s story carries a dark undertone; though much remains hidden, what is revealed is the diction of forced children: “I want to go to school. I want to fly high.” These are aspirational sentences commonly heard in the face of such coercion. The character’s makeup also denotes some form of physical abuse (perhaps meted out by the father, due to Dewi’s refusal).

While much of the above is conjecture, I believe it is informed speculation, one that, if true, places Adam’s film in the realm of social commentary. Perhaps this is because of my awareness of such issues to begin with, but it also comes into being because ‘Belas’ has provided the space for such interpretations to be made. Dewi’s wings, metaphorically clipped by society, is an example of the figurative made real, without precluding its inverse (of real-life discussions represented through storytelling).

All this boils down to Adam’s multi-hyphenate approach to question the storyteller and their audience. Ironically, it does feel like it is a pattern repeating itself, possibly lessening the surprise of his future films; by continuing this investigation, he runs the risk of trapping himself with this line of questioning. For now, it remains pleasant, but as clever as he has been with his films thus far, I hope he can expand beyond (t)his wheelhouse he has built for himself. He has made other films since, but I’ve not seen them, so perhaps this is already something taken onboard.

Adam is actually a creative writing student at FiTA, a programme I used to teach in. I am happy that he has shone brightly, as, in an intra-programme context, many have seen it as ‘lesser’ relative to the others (in part due to the relatively small number of students). It is, however, the little that can, and I would have loved to have had him in one of my classes. Alas, I will have to settle for his films instead. That present is a gift, for in them, there is plenty to suggest that Adam Taufiq Suharto has a bright future ahead.

We previously reviewed ‘Falasi’, while he also featured in Ridhwan Saidi’s ‘Sisa Binasa’.