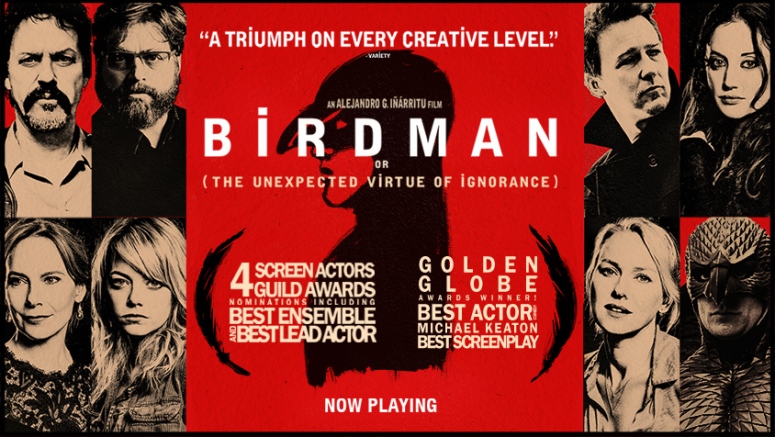 The above is a quote sourced from a PhD thesis by Gordon Gray, an academician who has become somewhat synonymous with anthropology and cinema, with an especial focus on Malaysian films. I’ve been cranking up on my own research in that regard, so you can perhaps forgive me for including such tidbits every once in a while.

I included the above citation, though, because I believe it applies somewhat to the film ‘Birdman’. In order for a star to become a film actor or actress, he or she must first be recognised beyond the text they are appearing in. You might think, therefore, that a film like ‘Birdman’, with a cast of leading actors such as Michael Keaton, Edward Norton, Emma Stone and Naomi Watts, amongst others, would probably be more suitable to a big budget Hollywood studio film.

Instead, Norton (‘The Incredible Hulk’) and Stone (‘The Amazing Spiderman’) have to make do with shining supporting roles in what they have described as extremely challenging to shoot. Watts, whose radiance was a key element of ‘King Kong’, is slightly dowdier but no less beautiful here. Of course, the alpha performer of them all here is Keaton, whose portrayal of in the late 1980s was credited as kickstarting the Hollywood craze with established franchises, especially superhero films.

Knowing their reputations helps, for that is the context that helps to inform the film viewing experience here. Norton, with a reputation for being a difficult person to work with, performs here as a difficult person to work with. The same goes for Stone, whose sass and attitude in many of her films has been indistinguishable from the personality as we know it. Keaton himself has been deemed down and out by many, a forgotten caricature of an actor without any relevance to the superheroes of today.

This was something his character, Riggan Thomson, noted in the film; as he enters his room once more, the TV news displayed the latest on Robert Downey Jr, whose travails as the Iron Man character is considered one of the most successful in contemporary cinema. Thomson, a theatre director, wanted to replace his leading man with a slew of other actors, but was informed that they have all been cast in key roles under masks. “How about Jeremy Renner?” “He’s an Avenger.” “Fuck, they put him in cape too?” The irony here is that Hawkeye, Renner’s Marvel character, does not have a cape.

That is one of the many ironies of this film; if married to the real-life context as we know it, the film is a walking, talking contradiction, both the mirror that may consider films to be that reflect society as much as askew it (Askew, by the way, is the surname of a co-author of a book called ‘The Anthropology of Media: A Reader’).

Does it seem like I’m talking about a more transcending, intertextual experience than the film itself? Yes I am. Is this deliberate? Yes it is. In this case, my mind flew all over the place, and I suspect that this is a part of the filmmakers’ intentions as well. Even in watching Naomi Watts as she shared a kiss with another girl reminded me of her performance in ‘Mulholland Drive’, a film I officially watched “because it was directed by David Lynch, innit” but was also intrigued by her supposed lesbian kiss.

This film is almost a subversion as much as a reference to all that. It is laced with all the stuff that you and I might think about but are rarely presented in the way it has been here. There are several points to add to that. One is a speech of sorts (certainly an angry one) by Stone’s character Sam. She is Thomson’s daughter, and channeling years of pent-up anger, pointed out how irrelevant her father is (“You don’t even have a Facebook page, you don’t exist!”). Later in the film, she talks about how her father, in his eccentricity, has gone viral, in hushed tones of admiration and respect.

Is this right? Is it wrong? I am not entirely sure whether it should be considered in such a light, but certainly the presentation of a perspective that jives more with a younger generation adds great colour to this colourful film. For even if the supposed long single take suggests a greying of all the colours, in reality that one take allows for many of the performers here to really sink into their roles.

This is a key quality of the film. It was very well made, and I only noticed one obvious transition from one scene to the next. It also flits back and forth between both sides of the fourth wall, at times placing us as both the audience and the performer. For is that not what we are these days? The creators and consumers of our own texts; if we aren’t the stars of films, we make our own stars in our own films.

Beyond that, I can only imagine what this film must have been like. My only attempt at that was a short film under ten minutes in a single location, and even then I had to completely rethink the ways my cast and crew members would work (we can’t be seen on camera, of course, so we had to really figure things out).

That, in effect, was inspired by Song Il-gon’s ‘Magicians’, a 40-minute effort made as a part of the Jeonju Digital Project in the mid 2000s. Unlike what you might read elsewhere, I would strongly contend that that film is (perhaps until this one, maybe) is the best single-take effort I’ve ever seen.

I have to stop here, because otherwise writing a review like this would never stop. There’s so much to say, and yet no amount of words would ever really do enough justice to the breadth and depth of this text. This review, then, is much like the film itself: about something and yet nothing at all, both at the same time, allowing for you to make your own meanings as you wish.